Chorus, a third-person space shooter in which the player takes on the role of the brave Nara and steers her spacecraft Forsaken, from miles away called Forsa. 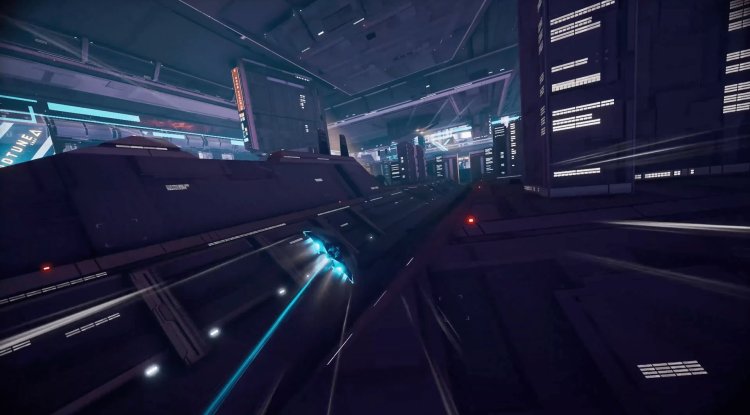 Chorus, a third-person space shooter in which the player takes on the role of the brave Nara and steers her spacecraft Forsaken, from miles away called Forsa. The two have a mystical connection and complement each other’s thoughts and complete sentences like a well-coordinated hip-hop duo from the early 2000s. The plot of the game is quite dark, the times are extremely dystopian and the most important thing for a game like this - the controls are great.

The story at the very beginning of the game looks promising. Everything is truly mystical and vague, which will stimulate the imagination and set expectations for most players at the very beginning of this space adventure. Nara is one of the pilots of the “Resistance” forces trying to defeat the evil forces of the cult called “Circle”. This cult wants to control the masses and rule over all living and non-living galaxies. What we soon find out is that Nara was actually a member of the cult a little earlier, and now she is trying to help the forces of the “Resistance”, of course, fearing that they might find out about her origins.

As a runaway cultist, Nara has certain powers that she rediscovers through adventure. In doing so, she is haunted by guilt and tons of moral doubts about various complex topics. Nara, with an eternal dilemma, is constantly trying to balance the relationship between good and evil, and all this over time becomes tiring even for die-hard Star Wars fans. Fortunately, Nara successfully transfers the mentioned powers to the Chorus gameplay, thus spicing up the air fight to a scale rarely seen in average games of this genre.

The narration can be forced, so most of the story is told through conversations that take place during the summer. These are mostly conversations between Nara and Forse, and occasional communication with other characters who are on other ships. Movie sequences are rarer and they contain exclusively Nara, without any other character.

The characters in the story are Nara and Forse, everything else is in the background and the story loses its credibility. It is clear to me that the creators of the game wanted to develop the personality of the two main characters and focus all their focus on their collaboration. But with so many other characters appearing in in-flight conversations, it would be okay for some of them to see their five minutes of fame as well.

The only characters in the story are Nara and Forsa, everything else is in the background.

Between Nara’s suffering because of remorse, addressing the player in the style of ASMR whispering and remembering the traumas of the past, there is also some gameplay. If Chorus has one trump card, it’s the gameplay, although the game has some flaws. The fight is characterized by carefully designed layering and the player almost always has several ways to approach an enemy squadron that relentlessly wants to crash Narin’s ship.

The standard weapons on the Forsaken ship are machine guns, lasers and rockets, and then comes Nara who uses the powers of runaway cultists and gives the Forsy additional capabilities such as drifting, disabling enemy commands and teleporting to the enemy’s tail. Narine’s powers are simply vicious and give the player a strong sense of dominance over ordinary opponents. The very ability of teleportation raises the intensity of air combat to a scale almost unseen for this genre, and thus also denies any association with simulation. No doubt, Chorus has completely moved into arcade waters.

Narine’s powers are simply vicious and give the player a strong sense of dominance over ordinary opponents.

Outside of combat, it is possible to explore various galaxies and that part is done in the style of the open world. In most situations, in addition to the usual acceleration, Forsaken can also use the speed of light to reach its destination sooner, whether it is a mission that advances the story or an optional task. In the side missions, Force and Nara earn money by which they later buy stronger versions of weapons and additional ship modifiers. Over time, the possibility of combining stronger additional weapons and ability modifiers opens up, which can give up to two passive abilities when using Forsi simultaneously.

All that arsenal and aerial stunts would be utterly futile if Chorus did not serve interesting enemies and challenging missions. The game continuously presents new, interesting enemies and regularly the first mission with a given enemy is a kind of tutorial. After that, new bursts of opposing forces gradually become more and more challenging until the next chance for a break when Nara starts again with memories and weighing the good and the bad. Usually, then free research follows, then a little story again, then some epic fight and so on in a circle.

In the open world, Nara can use a sonar-like ability to detect hidden objects or announce that there is an optional mission nearby or an entirely unexplored area. After the defense mission, certain space colonies are transformed into friendly docks where it is possible to land and make ship modifications.

All in all, the gameplay is what makes this game worth considering. The controls are precise, and situations that can cause frustration to the player are more about the design of certain sectors than the responsiveness and mapping of the commands themselves. Namely, occasional claustrophobic parts can be extremely strenuous when the game expects players to do acrobatics in a small space or, for example, maneuver at maximum speed through narrow passages. In addition, this experience is disrupted by some repetitive missions and the occasional over-ambitiously designed boss battle.

The controls are precise, and the situations that can cause frustration to the player are more about the design of certain sectors than the responsiveness

While in combat it is always important to avoid enemy fire, move as unpredictably as possible with as much acceleration and legendary “barrel roll” maneuvers, Nara theorizing about good and evil sometimes makes sense, so the player occasionally gets the opportunity to make morally tricky decisions. Later missions have a significant impact and potentially facilitate (or complicate) the fight. One early example is the mission escorted by the Resistance convoy, where Nara, after confronting notorious pirates, may decide to execute them and may spare them, thus allowing them to travel through the air and accompany the convoy. The decision made at that point will have a significant effect on one of the later missions.

On the PlayStation 4, where the game looks very good despite the technical limitations on last-generation devices. Loads at the transition of galaxies can sometimes be longer than standard, but fortunately, they are not too frequent. As for the visuals, it’s hard to find any bigger remark, we just have to admit that there were more missions that combined the colorfulness of the environment and all the possible explosions resulted in my disorientation. It’s hard to keep track of such situations as the number rotates in all possible directions avoiding opposing lasers, at least on a PS4 console that serves a comfortable but not perfect performance experience.

The music almost always corresponds to the current events on the screen, although after playing it can be noticed that nothing was actually extra memorable. The problem with the story of the game is also reflected in the voice acting, where Forse and Nara are much more convincing than all the other characters. Fortunately, the sound effects are much better, and they are the most important for action in games of this nature, especially when we destroy some space monster like the Death Star, while the bad guys are behind the tail of the ship.