There are indeed many adventurous and extravagant PC cases, but a newly introduced case has what it takes to knock PC builders off their feet. 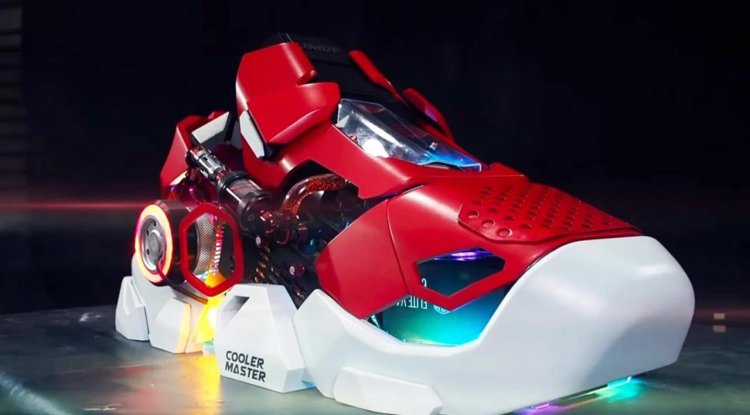 There are indeed many adventurous and extravagant PC cases, but a newly introduced case has what it takes to knock PC builders off their feet. For the 30th anniversary of Cooler Master, the Taiwanese hardware manufacturer presented a crazy PC case in the form of a very large sneaker.

Cooler Master comes around the corner with a very special PC case. This is called Sneaker X and is originally based on the idea of ​​PC modder JMDF. This modder submitted his design idea and the accompanying PC case to the Case Mod World Series 2020 two years ago. The case is an ode to the sneaker culture and accordingly only something for sneaker fans who want to marvel at one of their favorites in the form of a PC. However, the design itself does not attempt to imitate any specific sneaker model. According to JMDF, however, it was inspired by sneaker designs by Nike, Adidas, and Balenciaga.

The pictures of the Sneaker X can be deceiving, but the case is by no means a small PC case. A video from JMDF not only shows the impressive engineering but also gives an impression of the actual size. In the video, for example, a 600 W power supply can be seen as a sub-component inside the tip, which makes the case size quite clear.

Cooler Master also explains that the Sneaker X can house the "latest top-of-the-line CPU and GPU as well as an AiO cooler". In addition, the model of the modder shows off a lot of RGB lighting. Incidentally, the case presented in the video is a JMDF one-off. The corresponding model from Cooler Master will probably still be adjusted - also in order to be able to undercut the price of the single piece of a whopping 3,999 US dollars. Because the manufacturer has not yet given a specific price for its series production. It is to be hoped that this price will not be pushed up by scalpers - as is already common practice in the sneaker market. Cooler Master plans to start accepting pre-orders in Q3 2022.

In other news, the HAF 700 EVO is the new top model from the Cooler Masters case series with a focus on high airflow, which also has a proud price.

Cooler Master’s HAF series is expanding to include new Bigtower flagship, which is supposed to come up with a tool-free design and a contemporary and futuristic look at the same time. In addition, according to the announcement, the revised design should feature “next-gen hardware compatibility” and high airflow.