According to Elon Musk, the developers are currently working on making the Steam library or individual games from Valve's platform available for the cars. 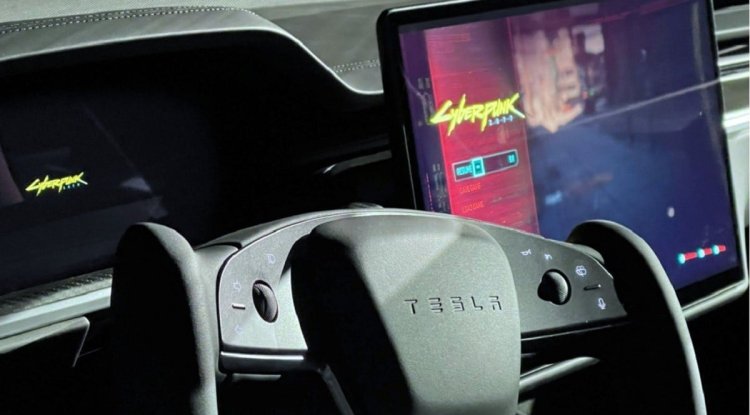 Apparently, Tesla is still working on expanding the infotainment system in its electric cars. According to Elon Musk, the developers are currently working on making the Steam library or individual games from Valve's platform available for the cars.

Tesla apparently wants to further expand the infotainment system in its electric cars. Various video games have been available for purchase via the system for some time. These are intended to pass the time, for example during the charging process. For a while, the games could also be played while driving. For security reasons, however, this feature has been deactivated again. Tesla recently offered the official Tesla Mic for Chinese New Year, which can be used to sing karaoke in style in electric cars.

But apparently, it shouldn't stay that way. Musk responded via Twitter when asked if the new version of Cyberpunk 2077 would soon be available in the Tesla. CD Projekt recently released version 1.5 of Cyberpunk 2077. At the same time, the next-gen versions for the Xbox Series X|S and the PlayStation 5 were also launched.

In June 2021, Tesla had already presented the Model S Plaid. The infotainment system is said to have the same performance as a PlayStation 5. Elon Musk has now revealed that Tesla developers are currently working on making the Steam library or individual Steam games available for the electric car.

Making the entire library of Valve's gaming platform playable on the Tesla is something the company wants to achieve in the long term. Valve is currently working on adapting as many games as possible for their Steam Deck handheld console. This circumstance should also be an advantage for Tesla. Both the Steam Deck and the infotainment system of the electric cars are based on AMD's RDNA2 architecture.

In other news, PC platform GOG.com, known for reviving classic games, has answered a question on Twitter about its own support for Valve’s upcoming handheld PC Steam Deck, which is scheduled to become available for delivery on February 25th for early reservations. According to this, there is no official GOG support for the Steam Deck, but “since the device has an open architecture”, it is said that Windows can be installed and thus also run GOG games.

As is well known, the Steam Deck relies on an in-house Linux distribution with the SteamOS operating system, which makes the GOG reference solely to Windows somewhat incomprehensible, because even if the majority of the GOG catalog consists of Windows titles (over 4,000 pieces), so 1,135 Linux-compatible games are also currently listed, which should therefore basically play on Valve’s handheld PC. Apart from that, Linux support for the GOG Galaxy client is still missing, which is why Linux games from GOG.com cannot be used quite as comfortably as under Windows.