Razer Zephyr mask is a futuristic-looking model caused a sensation at the launch, but you can find out in this video whether it's worth buying. 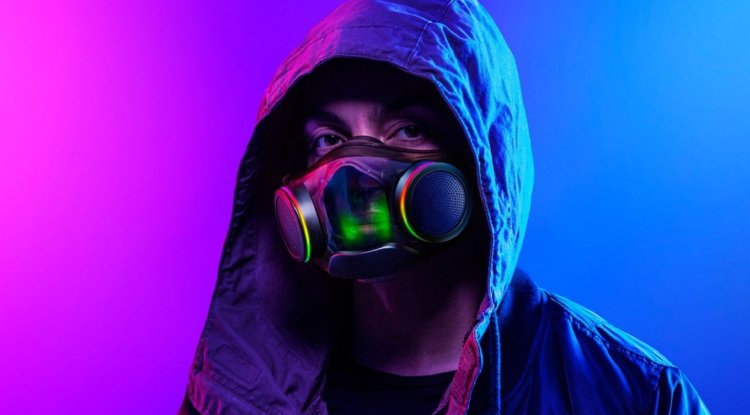 Today we want to introduce you to the Razer Zephyr mask. The futuristic-looking model caused a sensation at the launch, but you can find out in this video whether it's worth buying. First of all: This product is not for shy introverts, because the expansive Darth Vader look will definitely attract attention. With the Zephyr, Razer came up with something that corresponds to an optical requirement far removed from surgical masks. If you then activate the Razer typical RGB lighting, it is almost impossible not to attract attention as a walking, ventilating fairground. It's quite obvious that this eye-catcher is definitely out for style.

The Razer Zephyr was presented at CES 2021 as Project Hazel, but a lot has changed in the concept phase - the end product comes without the voice amplifier and the UV cleaning box. For comparison, the design of the end product has also changed - the basic shape, for example, is no longer as pointed in the chin area and the bracket does not go over the ears but is individually lashed to the back of the head. More on that later.

The good piece weighs 205 grams and comes with three N95 filters, but unfortunately, the mask is not N95 certified in Europe. In the USA and Great Britain, the mask requirement is fulfilled with the Zephyr. That's really a shame because Razer promises bacterial filtration of more than 99 percent, which means it protects even better than surgical and FFP2 masks and filters inhaled and exhaled air. However, since it is not N95 certified in Europe, it is officially not allowed to be used where the wearing of medical masks is required. In metropolises such as Los Angeles, Bangkok, or Beijing, for example, it is also quite useful if you want to relieve the lungs from the local air pollution.

It is quite sustainable because the replaceable 3-day filters last longer than the disposable masks. However, these also have a steep price: 30 days of protection with eight hours of wear per day is available for 35 euros with the filter package. These filters are easy to change thanks to the magnetic closures. However, It lacks a suitable fixed transport box - these easily removable magnetic closures can be lost very quickly if you accidentally bump into them on the way. A cloth bag is included, but that's a bit meager for such an expensive device. You also don't like to have the rather bulky mask hanging around your neck all the time when you don't need it.

Two intake fans are also integrated into the mask on the left and right, allowing for two speeds. We're talking about 4200 and 6200 rpm here. But is that to be expected from a mask named after a Greek god of wind? The cool thing about it is that the active fans allow you to breathe much better than with an FFP2 mask, for example. But it gets really uncomfortable when you activate the second stage in public, it sounds a bit like an air raid alarm. Unfortunately, this is the level that makes breathing so easier compared to an FFP2 mask. The first stage is barely audible. Speaking of acoustics, your own voice is severely muffled and you are no longer really understood unless the person you are speaking to can read lips.

On a positive note, and a social aspect, you can capture the facial expressions of your Zephyr-wearing counterpart because the mouth area is visible and even illuminated, unlike the medical masks. The inside of the plastic pane is coated so that it does not fog up from breathing and can be renewed with the anti-fog spray supplied.

A very simply designed app for IOS and Android allows the control of the RGB lights. It is somewhat impractical that the settings are not saved in the device and the Bluetooth connection must remain active for this. Otherwise, the LEDs would flash blue, indicating that the Bluetooth connection is missing unless you want to turn it off entirely. The permanent connection is quite unnecessary as it costs power from both the mask and the cell phone.

The RGBs include the usual 16.8 million colors. The mouth area and the external LEDs can be illuminated with different effects and colors. The Zephyr's battery can be recharged with the included sleeved USB-C cable - without using the fans and RGB LEDs, the mask lasts up to eight hours. With full use, i.e. with the fans and RGBs switched on, the battery does not really deliver a great performance with three hours of stamina, which is a bit little for a longer trip. To fully charge them again, the charging process takes a whopping three hours, so you have to learn a good charging routine.

The two adjustable straps for the head ensure an individual fit. The silicone face attachment also allows for a custom fit on the face. There is an unpleasant effect that occurs when you wear it for a long time, which we unfortunately already know from other masks - the red imprint on the face. You look like a raccoon after weaning.

As for the price: it's not without it, because it costs $ 99. So IF the Zephyr is available again at all, you have to be sure whether this stylish RGB fun with air filter function is worth it.