Forza Horizon 5 - it's not about winning

Because everything we praised in Horizon 4 we can praise in the fifth part, and everything we complained about for that game we don't like in this one either. 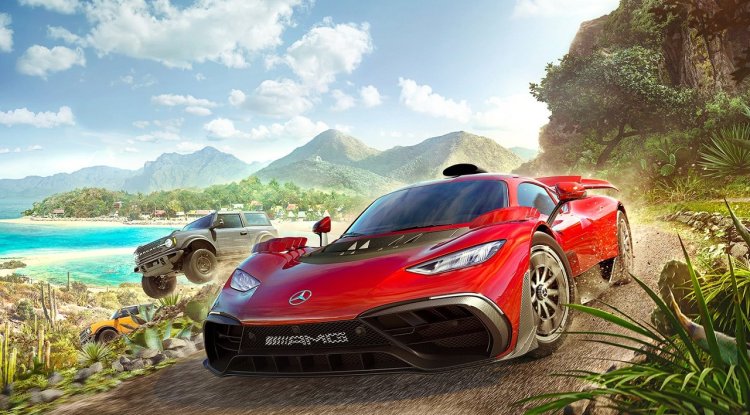 Forza Horizon 5 is the same as Forza Horizon 4, only in Mexico. Instead of reviewing this game we could comfortably throw in a series of comparative memes like Same Energy, Separated At Birth or They’re the Same Picture. Because everything we praised in Forze Horizon 4 we can praise in the fifth part, and everything we complained about for that game we don't like in this one either. With this attitude, we open the review because we think that Forza Horizon 5 is the only real competition for Forza Horizon 4 - other games in the arcade driving genre today are simply not on the same level as Forza. And in that regard, we may be a little sorry that Forza Horizon doesn’t have the need to change much more than its place of action.

If nothing else, that biggest change is a full hit for Forza - Mexico is a great location. It is visually more attractive than we thought it would be, and geographically more diverse than previous locations in Forza. We liked that this Forza has a slightly more hilly region with impressive views that shoot into the distance. Descending from the highlands of the map is something special when you can see a change in weather on the horizon. In Goliath races, you can cross the canyon, desert, rainforest and beach in about 15 minutes, and the way the landscapes merge with each other seems natural. It’s not an easy thing to guess the size of the map for games like this, and the Playground Games team with this piece has once again shown that they are masters of their craft.

Mexican roads are also masterfully designed. They are wide and flat enough that you can enjoy a fast ride (200+ km / h), and we also liked the fact that there are plenty of opportunities to cut the route across a field or vineyard, without much slowing down. The density of stationary objects and the traffic itself is very low, but with the obvious intention that the player has as little distraction while driving. The vegetation in Mexico is extremely lush, but that doesn’t mean more frequent slowdowns than even more things to break. Cacti become an endangered species after your visit to Mexico.

When we say that Forza Horizon 5 is the same as the fourth part, it refers to the structure of the game and the activity in it. Of course it's not all the same, but everything you've done in previous Forza is still present. The disciplines of the competition are the same as before (street race, off-road, drift, etc.), looking for garages with car wrecks is identical to that in previous games, just like the side activities of breaking XP panels, long jump competitions, etc., etc.

We still stand by the statement that Forza Horizon has the most diverse set of activities in racing games. I am always surprised by missions with various tasks. For example, a mission in which you must not lower the speed below a certain point, a mission to photograph the given conditions or optional tasks to find certain objects in a location. The game is by no means lacking in variety, but compared to the four, there is no striking novelty (such as the change of seasons). If it didn’t sound like we're complaining baselessly, we'd love to see motorcycle races in Forza now, for example.

Two notable additions among the activities in Forza Horizon 5 are Horizon Arcade and Event Lab. Horizon Arcade are group competitions that appear on a map at a given time. For example, Arcade Drift is driven by elimination rounds and players must collectively collect as many points by drifting on a particular route. In other types of Arcade competitions you get different tasks, e.g. to perform a jump to a certain distance within a certain period of time, etc. The idea behind such competitions is good and encourages teamwork. But you already know how it goes: if you’re not in a group with famous players, often Arcade competitions can be a waste of time.

IT IS IMPORTANT TO PARTICIPATE

Forza Horizon 5 continues the policy of previous games, which we don't really like, but we can't call it exclusively bad. It is a policy that in this game for advancement it is not important to win. The game is designed so that it does not want to frustrate the player in fear that he might give it up. Prizes are not awarded here for dominance over rivals, but for participation and fulfillment of given conditions. It’s not that the game won’t reward you in any way if you’re first in the race, but you’ll get a bigger reward if you complete daily, weekly or seasonal tasks. Okay, sometimes as part of that, it’s stated anyway that you win some races with a particular vehicle, but it’s not a problem if you ignore it. You have a chance to win some prize all and to reverse the whole race.

Forza Horizon 5 reminds us of Oprah Winfrey and her famous gift of a car to her audience. And here's your car! Everyone gets a car! Anyone in the game can give away any car to anyone for no reason. Giving is a nice gesture, but not very encouraging, to be honest. We got some expensive car as soon as we started the game, as a reward for playing Forza Horizon 4. Then we got some fast car because it's Xbox's 20th birthday - house of honor! In Forza, you just don't have that feeling of satisfaction when you earn a reward with your own skill that you will be happy with. Instead, you have a wheel of fortune with prizes ranging from the sound of a bike bell for a car horn to the amount of a few hundred thousand credits (potentially more than the prize for first place in a race).

Forza Horizon 5 is an interesting game for vehicle collectors, but also a game in which a new T-shirt for your character is more expensive than a good part of the car on offer. One comes to wonder why the clothes in the racing game are more expensive than the vehicles themselves, and then you remember: the challenge here is secondary, it is important that everyone has fun the way they want to have fun.

THERE IS NO BETTER

Complaining about AI sometimes sounds to us like a trifle besides all the other things Forza Horizon 5 does fantastically. It is true that there is no more meaningful or beautiful racing game of this type on the market. And we haven't even praised the flexible driving model, which equally well conveys the adrenaline of fast driving and the need to properly enter a sharp turn. That part is somehow taken for granted when we say that the game is not too different from the previous part. And let's be honest: it's hard that this driving model can be much better, at least from the aspect of playing with a gamepad - we haven't experienced the game on the steering wheel, so we can't talk about it.

In the end, it is not insulting to say that Forza Horizon 5 is the same as the four, only in Mexico. If it was good before - it is good now, only with even nicer graphics in an ever more diverse location. Just keep in mind that the Forza challenge format is not what the games used ten years ago. This game wants to be accessible to everyone and for that it makes some compromises. The key thing in all of this is that you don’t have to beat everyone here and win just about everything to have fun.