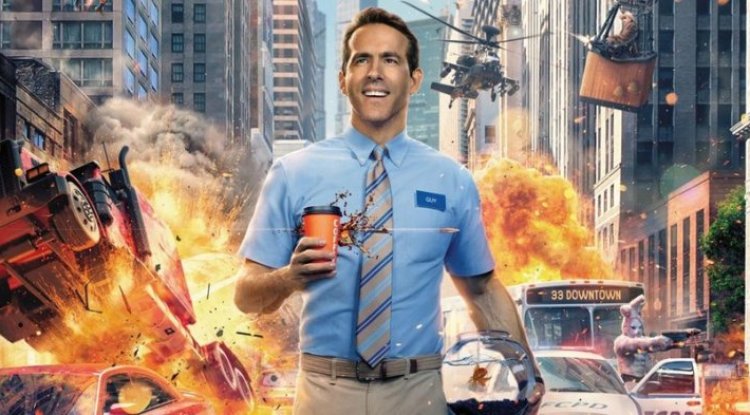 Who would have thought that a film about video games that many have dubbed as a cross between "Truman Show" with Jim Carrey and Disney's cartoon "Wreck-It Ralph" is the most successful Hollywood offshoot in the last month, it is even more successful in terms of revenue from the innovative (and subversive) blockbuster "Suicide Squad."

"Free Guy" had a lot of handicaps, at first its release date was postponed for almost a year, before that it survived the fusion of Disney and Fox, so it was assumed that Disney marketing would plant clips because it was still a Fox product, and finally, since that it’s a film for a family audience, how to explain to parents who have never played video games that it’s something they should watch with their kids. I think that crucial role was played by Ryan Reynolds, who in two "Deadpool" movies showed that he can be very provocative and immoderately vulgar, but here he simply captivates with his charm and charisma.

He plays a guy who is simply called Guy and at first, is unaware that he is a supporting character in a video game (non-player character) that enjoys worldwide popularity, however, there is a rift among the authors of this high tech prank. It was actually designed by Walter McKey ( Joe Keery ) and Millie Rusk ( Jodie Comer from the series "Killing Eve"), they wanted it to be a training ground for aggressive urges, but the concept was stolen by the pretentious Antwan (director Taika Waititi, he signed the great "Jojo Rabbit", "Thor 3", and is already slowly preparing the next film from the "Star Wars" franchise) and hired them as programmers, who will always have control. Millie, however, figured out how to stick it to him,  and stepped into the game as the action heroine of Molotov Girl, and explained to Guy that he no longer had to be an extra but could become an important player.

His life is now changing radically, so far he has worn a light blue shirt and cream pants every morning, a ritual he is already a little tired of, on the way to the bank where he worked as an ordinary clerk the same things would always happen, he waited patiently for robbers to break in and make a mess, and now that amazing Molotov Girl has appeared and explained to him that she can stand up to these horrible guys. Guy very quickly adopts the new rules of the game, so the video game "Free City" is moving in a new direction.

Antwan, however, noticed that something unusual was happening because his current customers were dissatisfied, there was no more violence and negative adrenaline in "Free City", so he decided to abolish it and turn it into a franchise that would be more like the original.

“Free Guy” is actually a mild satire on a contemporary Hollywood situation where everything is subordinated to noisy blockbusters, and movies produced in the old way are thrown into the background. McKey and Millie are representatives of this new current that never gets the right to vote, while Antwan - in an excellent interpretation of Taika Waititi - is a representative of the evil Hollywood tycoons.

Life ironically imitates fiction, so Ryan Reynolds boasted that Disney was very pleased with the results of his film, so it gave the green light for the preparation of the project "Free Guy 2" and who knows how many more sequels. The message of the film is somewhat hypocritical, as something like this rarely happens in reality, Hollywood shakes Antwani, and McKey and Millie rarely get a chance.

And director Shawn Levy himself seems to understand this dichotomy, this film is pretty solid to him, especially the good visual prose, but the franchise “Night at the Museum” seems to belong to projects designed by Antwan. Luckily, Netflix’s “Stranger Things” series is a lot more creative to him, so it may still understand the “Free Guy's” message well.