This is the Radeon RX 6500 XT, the most discreet in terms of performance, and even so, the manufacturer has provided it with a large triple-fan heatsink. 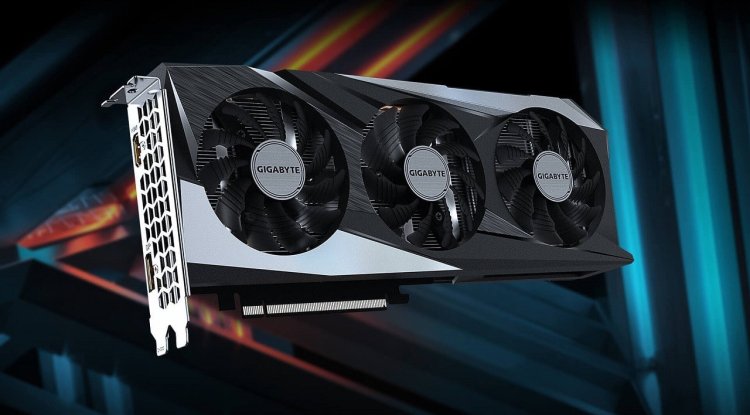 We are facing the Gigabyte Radeon RX 6500 XT custom version, the most discreet of the range in terms of performance, and even so, the manufacturer has provided it with a large triple-fan heatsink. In this way, it maintains the aesthetics of its entire saga while giving us an excellent view of the gaming chassis.

Triple fan for the smallest of the family

Even this Gigabyte Radeon RX 6500 XT, which is the least powerful graphics card of the RDNA 2 architecture, has deserved to be fitted with the Windforce 3x heatsink. Actually, it is not for a thermal reason, because this chip has an adjusted TDP of 120W for custom models, offering a consumption of about 60 to 70W.

Rather, the reason will be aesthetic and will undoubtedly be one of the best options to show off in a gaming chassis with glass, although, unlike the superior models, it does not integrate RGB lighting on its side. Its size could pose problems in ITX chassis with its 280mm length, although its width of 110mm and thickness of 2 slots on the contrary are quite tight.

As always, the heatsink box has a thick rigid plastic casing with excellent 3D finishes combining black and gray to give it that elegant and sober style that is so characteristic of the brand. It does not lose an iota of essence compared to the more powerful models, being much prettier than the possible EAGLE model.

The lateral zones will be semi-open, that is, the case will cover only the thickness of the fans to help focus the air towards the aluminum block. And this one will be open for the hot air to come out. The front end remains as well as the right part remains closed for a reason that we will now see.

The reason will be none other than the large hole that has been created in the aluminum backplate so that one of the fans can pass through the entire heatsink with the airflow. The result is somewhat similar to that carried out in the high-end models, although here it is not really very useful as it is completely leftover in terms of temperatures. It is good news that this plate remains metal, also very well decorated to give us a high-level aesthetic.

We return again to the fan area to find three 80mm units with AeroBlade design on their blades, having a leading edge improves airflow without raising noise. And in fact, it will be a completely silent heatsink operating well below the maximum RPM of its fans. The system also has zero RPM function while the graphics card remains idle.

It is not a circumstance of this Gigabyte Radeon RX 6500 XT, but corresponding to all 6500 the fact of having only two rear ports:

And it really makes sense because of the tight capacity of the card, which uses a PCIe 4.0 x8 interface capable of maximum of 8K resolutions. It could perfectly well have put 4 interfaces like many other old cards, but it is a way of limiting the benefits of this model in the low range.

Gigabyte has opted for a single 6-pin EPS header to supply power to its PCB, which is the same as the reference model. Being a tiny PCB, the header is placed very close to the middle of the card leaving the cable quite visible once connected. The fan connector is also quite visible, being relatively easy to disconnect it to separate both elements that make up the card.

We continue the analysis of this Gigabyte Radeon RX 6500 XT, now moving on to the technical analysis where some new features are presented that will surely serve the new generation of cards that is coming.

Let us remember that the separation of the heatsink from the PCB implies the loss of product warranty.

The all-aluminum heatsink block uses a single block design with longitudinal fins, unlike high-end blocks that are split and use a transverse format. It is a logical solution as it is a slim block and with much tighter measurements, but it is still really wide.

To confer sufficient rigidity, we have several metal ribs distributed throughout the block, as well as two copper heat pipes also in a transversal format. Both generate the cold plate that will be in direct contact with the chipset through the thermal paste, extending to the sides to re-enter the heatsink a total of 3 times to better distribute the heat.

We can see how tiny the die of this chipset will be compared to other RDNA 2, only taking up 107mm 2 . Around it we have a nickel-plated aluminum cold plate that is responsible for cooling the two GDDR6 memory chips that have this configuration, using thermal pads for contact with them. And a third aluminum plate is responsible for cooling the MOSFETS and Chokes that make up the power phases.

This Gigabyte Radeon RX 6500 XT is using a much shorter custom PCB than the heatsink as it doesn't need more space for components. We are interested in the configuration of the power supply phases, which in this case will be 4 main phases for the chipset with R15 chokes together with what appear to be 3 secondary phases with R22 chokes. MOSFETS with separate high and low sides and two NCP81022N drivers from ON Semiconductor are used.

This model is designed to offer gaming performance that ensures 60 FPS or more in Full HD resolution with medium and high quality. We will certainly see that it fulfills it, although with very demanding games that have Ray Tracing involved it will be practically impossible. For this, AMD has created a new Navi 24 specification chipset that, although it belongs to the RDNA 2 architecture, is released in a new manufacturing process at 6 nm FinFET TSMC (before 7 nm) that improves thermal efficiency and allows us to obtain a higher frequency of the clock.

We have already seen that its TDP is fixed at only 107W for stock configurations and up to 120W for some custom models as this will be the case. Inside the chipset we find the most discreet configuration seen so far in the architecture, with 16 compute units, which in turn integrate a total of 1024 shader cores and 16 ray tracing cores. It, therefore, means that the card is capable of offering hardware ray tracing just like its older sisters, making it very interesting not only for games but also for 3D modeling and simulations.

A relevant aspect will be the working frequencies, whose figures rise to a base clock frequency of 2200 MHz, a game frequency of 2685 MHz for custom models, and a boost frequency of 2815 up to 2825 MHz. It is therefore the graphics card with the highest processing frequencies on the market, and we will see that in manual Overclocking we will have no problem reaching a little more than 2900 MHz. Will we see a new generation of AMD with more than 3.0 GHz?

The negative note, so to speak, will be the 4 GB of GDDR6 memory that has been equipped, which is understandable for a low-end model designed for 1080p, but we will find quite a few graphic limitations in demanding games like Doom Eternal for example. This capacity has another reason for being so low, which is to limit the use of the GPU for Ethereum mining, since the DAG file will not fit in these 4GB, making it almost impossible to use it for that purpose. It is good for the players, so in principle, there will be more stock.

AMD has tightened these GDDR6 chips by giving them an effective 2250 MHz, thus generating transfers of 18 Gbps. The card works on a 64-bit bus with a maximum bandwidth of 144 GB/s. It also takes advantage of the RDNA2 memory architecture with 16 MB of Infinity Cache, and from BIOS we can activate the Smart Access Memory function on compatible boards (ReSizable Bar) to make VRAM available to the CPU, both in Intel and AMD.

A big feature for this Radeon RX 6500 XT will be FidelityFX Super Resolution, Team Red's software spatial scaling technology available in more and more games. With it, we can process the image at a lower scale and then rescale it to the selected video resolution to play more smoothly with demanding games. Alongside it, we have Radeon AntiLAG to improve latency in games, as well as other features included in the Adrenalin software.

Final words and conclusion about the Gigabyte Radeon RX 6500 XT

It seems that the performance is going to be very similar between all these custom models since we see that the Gigabyte 6500 XT practically nails the results of the XFX model, although it leaves some FPS in certain games by having a little less boost frequency.

AMD has created a chipset suitable for a low-end card to be able to exceed 60 FPS with high-quality graphics and 1080p, although this will not be the case with the most demanding ones. As the successor to the RX 5500 XT, the truth is that it is too tight, operating in similar figures, although with greater efficiency and adding RDNA 2 functions such as Ray Tracing or Smart Access Memory, although they are not used as much as in the superior models.

FSR will be an important tool for this card, as well as Radeon AntiLAG to achieve decent figures in 2K with demanding games, of course giving up some graphic quality. The most limiting aspect will be its 4 GB of capacity, more critical than in the previous model as it currently has very demanding games at the level of loading textures. Although it is a way to scare away miners from Ethereum.

Finally, this Gigabyte Radeon RX 6500 XT will be available for a recommended price of €270, although we see much higher figures in the store of up to €300 or more, which are excessive for its performance. For now, it is what it is, and we will have to wait if everything is normalized. It is true that we expected a greater difference with respect to the RX 5500 XT in performance, and we hope that some definitive drivers will be able to get some more FPS.