The performance of the Radeon RX 6500 XT left many wondering. Now there are indications that the chip was actually designed for a different purpose. 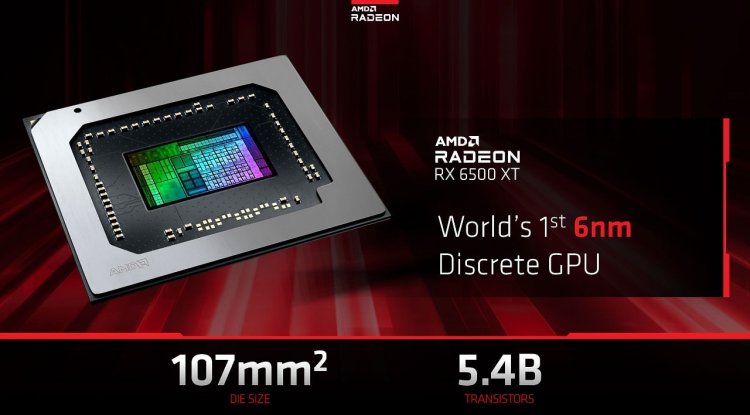 The performance of the Radeon RX 6500 XT left many wondering. Now there are indications that the chip was actually designed for a different purpose. Navi 24 was supposedly intended as a companion chip in Rembrandt notebooks.

The disappointment was quite big after testing the Radeon RX 6500 XT. Although the card is below the entry-level in the market for dedicated chips, it is unfortunately already unreasonably slow, as our test shows. The combination of only 4 GB memory and the slimmed-down PCI Express interface makes it difficult to recommend the Radeon RX 6500 XT as a serious gaming graphics card or alternative to used goods.

In the end, you have to state that the Radeon RX 6500 XT should enable cheap and smooth Full HD gaming with medium to high details. As it turns out in the test, this is correct in the sense of a warning - maximum details are too much for the RX 6500 XT in the vast majority of games. Liquid exceptions like Days Gone, Desperados 3, and The Witcher 3 prove the rule.

Of course, this raises the question of why AMD is doing this at all? Because then you knew for sure about the performance of the product. A possible explanation comes from the Phoronix forum. An AMD employee spoke up to emphasize that the Navi 24 chip was never actually intended for dedicated desktop cards, but as a small notebook chip, where it can be used Rembrandt APUs to be paired.

That would explain the odd decision that hardware acceleration for media is relatively useless on the Radeon RX 6500 XT - in the notebook, Rembrandt could cover that. For the desktop PC, the card cannot even be used as a (actually too expensive) replacement to cover modern video codecs. Navi 24 will also appear for Workstation and H264/H265 and AV1 are probably missing there too.

John Bridgman (Linux NPI SW Architect at AMD) has the impression that only encoding and not decoding is limited, but wants to research the topic again internally. Ultimately, the point is that for whatever reason, Navi 24 was "misused". It cannot be due to the availability, because that is not really given either. Its use, even as an entry-level chip in notebooks, is also somewhat questionable. One can only hope that the full story of the chip will eventually be told.

Ultimately, it looks like the Geforce RTX 3050 for 50 US dollars will be the much more attractive entry-level card and on paper, even Intel's Arc models look better, which are initially only supposed to cover the entry-level segment; at best reach into the middle class. Meanwhile, the Radeon RX 6400, which is only used by OEMs, will be even less enjoyable.