Filming for the fifth season of Netflix's hit series 'Crown' has begun, in which we will be watching a brand new cast. But everyone, of course, is most interested in what Princess Diana will look like, who will be played by Australian actress Elizabeth Debicki in the new two seasons. 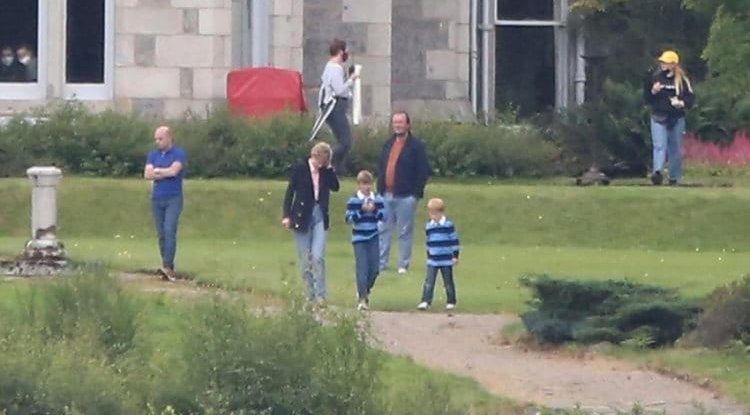 Elizabeth Debicki was photographed on the set of ‘The Crown’ for the first time this week while the footage was being taken at Ardverikie Lodge in Scotland. Her children Princes Harry and William can also be seen in the shots with the 'new' Diana, but it is not known which actors will be portraying them.

In August last year, it was published that 30-year-old Debicki would play Princess Diana in two new seasons, which will deal with, among other things, the death of Lady Di in 1997. On the set of the first shots of the hit series, Debicki was filmed in a casual outfit; faded jeans, a dark blue jacket, and a pink shirt as the boys ran around her.

Debicki took on the role of Princess Diana in the final seasons of the series from Emma Corrin. The actress says it is a real privilege to play the Princess of Wales because her spirit, words, and deeds live in the hearts of many. It is a great honor for her, she says, to get the opportunity to join this masterful series, which, she reveals, she has been hooked on since the first episode.

By the way, the series 'Crown' raised a lot of dust with the fourth season, and it was also condemned by the royal family because, they claim, it distorted the facts. Even British Culture Minister Oliver Dowden has asked Netflix to put a label that the series is fiction. He felt that viewers should be warned at the beginning of each episode that this is not historically correct but fictional as some scenes from the series had harmed the royal family.

In the fourth, by far the most controversial season, Prince Charles meets and marries the young and naive Diana Spencer and at the same time maintains his relationship with the love of his life, then married Camilla Parker-Bowles. The scenes in which Diana's fight with bulimia was vividly shown caused a special outrage, and those scenes also had a graphic warning.

British journalist Michael Cole, who follows the royal family, is of the opinion that the series, which in its fifth season will follow the love story of Princess Diana and Dodi Fayed until her death in August 1997, will contain a lot of dramatic material and stunning discoveries. The fifth and sixth, and final seasons of 'The Crown' will cover the early 90's, including the great Windsor Castle fire and the collapse of Queen Elizabeth's three children, the divorce of Prince Charles and Princess Diana, Prince Andrew and Sarah Ferguson, and Princess Anne and Mark Philips.

Interestingly, in February, Prince Harry defended Netflix, with which he has a contract worth more than about 100 million dollars. He said the series was ‘fictional’ but also ‘loosely based on truth’ and that it captured very well the feeling that family members were expected to ‘have a duty and service that is above family and everything else’.

Elizabeth Debicki will play Princess Diana in the final two seasons of The Crown (Seasons 5 and 6). pic.twitter.com/Z3CjHuJ56B