There are many watches of the past that were not very successful at the time of their launch. It has been with the passage of time that they have gained appeal to collectors. 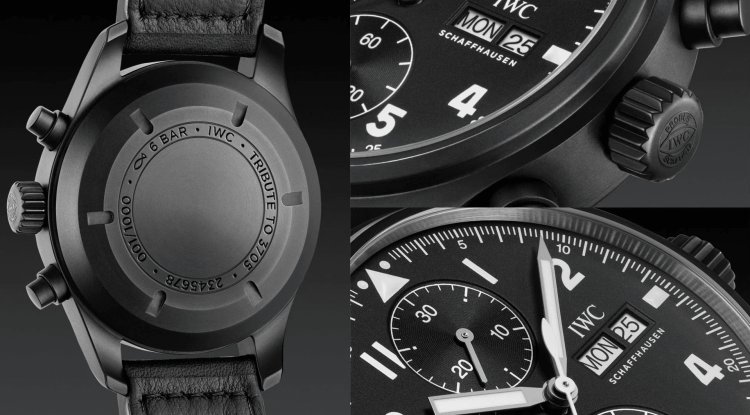 For different reasons, there are many watches of the past that were not very successful at the time of their launch. It has been with the passage of time that they have gained appeal to collectors. The most famous case is the Daytona Paul Newman. Although the watch industry is replete with more examples. Among them, we find the IWC Fliegerchronograph Keramik, better known as Black Flieger or reference 3705. Launched in 1994, this watch went down in the history of the Schaffhausen firm as its first ceramic Pilot's Watch. Despite this innovative factor, or precisely because of this, the 3705 had a short commercial life and it was discontinued after a few years with just a thousand pieces sold. It took more than two decades for fans to lay eyes on him again and make him an object of desire.

The growing interest that this piece has aroused among collectors has encouraged IWC to bring it back in a limited edition called the Pilot's Watch Chronograph Edition 'Tribute to 3705'. The similarity between the two models is evident in the photographs, but this special edition is much more than the recovery of the coveted original. Unlike the old Black Flieger, the 'Tribute to 3705' is made from Ceratanium. This material has nothing to do with the ceramics used by IWC in the 90s.

The Ceratanium is based on titanium, although the metal receives heat treatment leads to purchasing a similar look and feel to ceramics. We can find more watches on the market made with ceramic, but only at IWC made with this advanced material. All external components of the watch, including the strap buckle, are made with it. In comparison, the 3705 had only the center carriage in this material. Both the crown and the pushers were made of steel. A technical limitation of the time is happily overcome.

The cover maintains the aesthetics of the original. The design is characteristic of the IWC Flieger. The black surface in a matte finish seeks to minimize reflections from the sun's rays. The white of the hands and indexes provide the right contrast for perfect legibility. Of course, the double window arrangement is maintained in the calendar; a detail that the most loyal fans of the house will appreciate.

The machinery also changes. IWC's means of production are not the same as almost three decades ago, converted today into a full-fledged manufactory. Instead of the original Valjoux 7750, the caliber chosen this time is the self-made 69380. It is an automatic movement that stands out for its robustness and, above all, the inclusion of a column wheel in the chronograph function. This technical detail is evident when we press the buttons. The power reserve stays at 46 hours.

As we indicated at the beginning, this Pilot's Watch Chronograph is released in a limited edition. The chosen figure is 1,000 units, a fairly high number that confirms the firm's desire for the piece to reach as many fans as possible, although taking into account at all times that it is a special model. More exclusive is the method chosen for its sale. The watch will only be available through digital media. The available options are the official boutique of the firm itself at IWC, the exclusive YNAP portal, or, already more focused Chinese market, the WeChat and Tmall platforms. Its price is 11,900 USD for the United States.