Microsoft launched the Surface Duo 2 phone back in September, and the device arrived with several improvements over the first-generation Surface Duo. 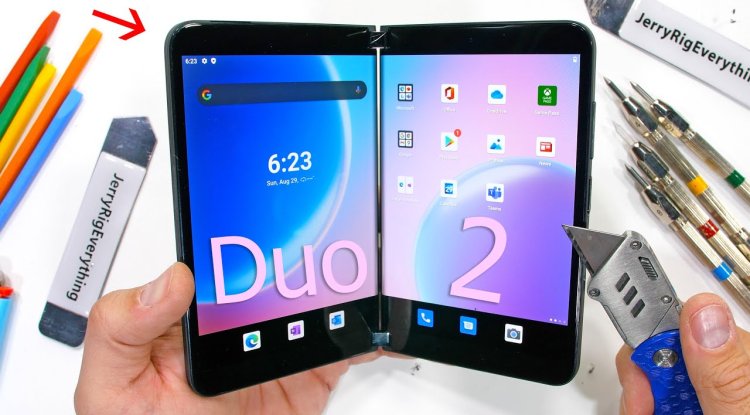 YouTuber JerryRigEverything has released a video endurance test that highlights the features of the device. The video shows how the Surface Duo 2 goes through some rigorous tests, which have become Zack Nelson's usual routine after all.

The new Microsoft smartphone has a folding screen although its design does not seem to differ from the folding devices we have seen such as the Galaxy Fold 3. The Surface Duo 2 has two screens separated by a hinge and frames, but none of the screens can be folded.

Hinges are still a delicate part of folding phones and the Surface Duo 2 has gone through some tough tests in that regard. The two screens can withstand a direct flame from a lighter without any visible damage.

The phone is also well equipped against bending, although the part opposite the hinges is prone to bending, which is a disadvantage, ie it is structurally quite strong but still has disadvantages. The sides of the Surface Duo 2 are plastic, which makes the device prone to scratches.

However, its screens are covered with Gorilla Glass Victus, which we saw scratch only at level 6 on the Mohs hardness scale (ordinary metal keys can't do anything to it)

Microsoft will hope that the Surface Duo 2 will get better reception than its predecessor. However, it remains to be seen how it will compete with leading models such as the Galaxy Z Fold 3 and Galaxy Z Flip 3. As things stand now, potential users are at least confident in some level of robustness for the Surface Duo 2.

What is your opinion on this, do you see yourself as a user of this model?