Design has thinned the tablet to just 7.3mm, making it thinner than a good part of the phone, and the 13” screen now has modern thin edges. 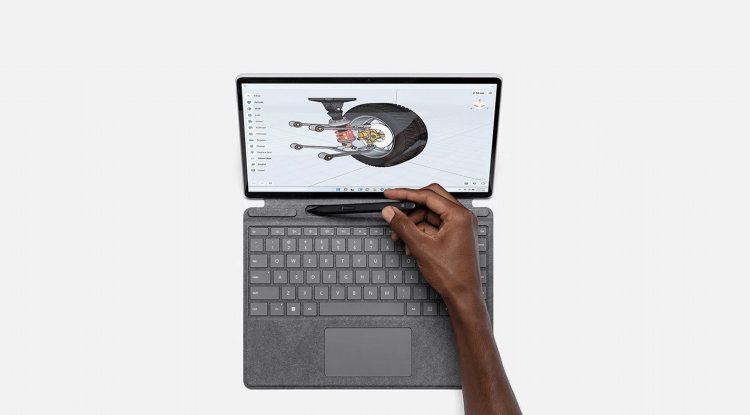 Design has thinned the tablet to just 7.3mm, making it thinner than a good part of the phone, and the 13” screen now has modern thin edges compared to the Pro 7 versions. It is an IPS screen that faithfully displays colors from sharper viewing angles, while brightness is best when viewed directly. With almost 500 threads of brightness, the screen can also be used in daylight, but for reflections you will need to position yourself for optimal viewing. It is a touchscreen with a ratio of 3: 2, which in our opinion is ideal for surfing the web as well as most business and office applications. The resolution of 2880 x 1920 pixels makes this screen very sharp for viewing any content, but the responsiveness of the screen is relatively low, which means that it is not ideal for gaming.

The rest of the case is metal and has a standard swivel stand that can hold the screen at a large number of angles. Under the stand you will find a cover that you can open as well as a SIM slot on mobile phones, pressing the needle into the hole of the case. The cover held by the magnet pops out and when you remove it you have direct access to the M.2 2230 SSD, which you can easily replace. In case you have downloaded a compatible version, you can also insert a SIM card to access the LTE Advanced (4G +) network here. At the back, at the top of the tablet, you have a plastic rim that contains antennas as well as a solid 10 MP rear camera. Thinner edges mean that there is no longer a standard USB-A slot, but on the left you have two USB.C slots that support standard 65 W charging and serve as an output for monitors and data transfer. Above them is a solid design sound control button with a very clear click.

The right side has a tablet power button, while below it is Microsoft’s Surface Connect, a unique slot that is magnetized and serves for standard laptop charging, but it can also be connected to Microsoft’s hubs to expand the connector. Let’s go back to the front, above the screen where there is an above-average 5 MP camera that provides very good video for web conferencing. In addition, we have an infrared camera that serves as a login via the Windows Hello function, which recognizes the user’s face and unlocks the tablet based on it. There are also two microphones for solid call quality.

Microsoft presents this device as a 2-in-1 laptop, but for such functionality you will also need an additional keyboard that connects to the tablet with magnets and is a significant financial addition to an already expensive tablet. But it gives it the necessary functionality that unlocks this tablet into a true Windows 10 system that can compete with traditional laptops. Okay, competing is perhaps a little too early a statement, given the limitations of the Windows ARM system. The keyboard is solid with an Alcantara surface in multiple colors and offers the pleasure of typing with very clear keys that can easily compete with any Ultrabook. With the keyboard you also get a flat stylus that has its own quiver in the keyboard and will be hard to lose. It has excellent precision with a high response speed, and the screen recognizes it over an inch away.

The Surface Pro X comes with two chips, Microsoft SQ1 and SQ2, which are actually the same Qualcomm ARM processor, with some Microsoft changes. Based on available tests, the performance of both processors is almost the same and the difference is that the SQ1 comes with 8 GB of RAM, while the SQ2 is available with 16 GB of RAM. We test the SQ2 with 16 GB of memory and 256 GB of SSD storage which, as we mentioned, is interchangeable. The processor has 8 cores divided into two groups, 4 high power and 4 low power cores, similar to solutions in mobile phones. The Windows 10 system has just begun its journey into the ARM world and this can be seen in the applications. It can run ARM applications in 32 and 64 bit versions, of which there are relatively few, of course.

Of the classic applications, it supports only 32 bit, with the announcement that 64 bit support should come “soon”. The problem here is compatibility, because the number of 32-bit programs is decreasing very quickly, and they also currently have a very low execution speed on the Windows 10 ARM platform due to relatively slow emulation. At the end of the day, you put yourself in a position to have very early adaptations of this system, you have few compatible solutions that work well, including the Chrome browser, so the system actually works best with Microsoft’s new Edge browser. Let’s say you really want to use web-based applications and mostly use office tools, this kind of tablet / laptop would be ideal for you to work with because the all-day battery was promised everywhere. However, Microsoft still promises up to 15 hours of work, although in the standard conditions of writing texts and watching videos, our battery lasted about 7-8 hours, which in the end is similar to Intel’s version of Surface Pro 7. The only difference is that Intel’s processor has more significant heating and will last shorter at higher battery loads, while with the ARM version of the Surface you can constantly expect 6+ hours of operation no matter how much you load the processor. The screen will continue to play a significant role in battery life.