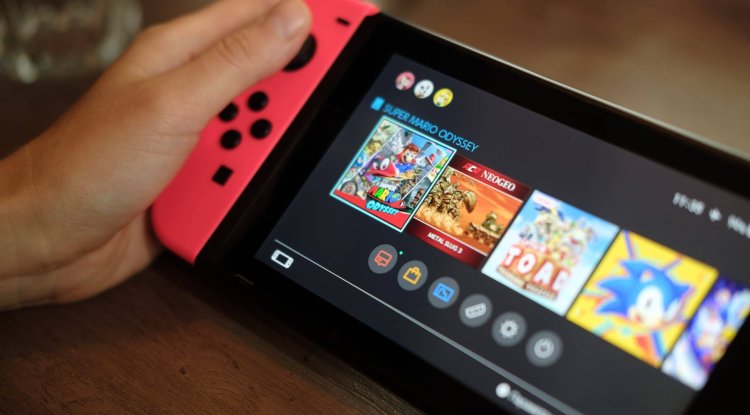 Rumors about a Nintendo Switch Pro don’t stop. We collect all news and rumors about release, price, hardware and more.

With the Switch handheld, Nintendo landed a complete success in 2017. The console is fun for the whole family and on the go. Thanks to exclusive titles such as The Legend of Zelda: Breath of the Wild or Animal Crossing: New Horizons, even those who play a lot were won over by the switch.

Since the release of the switch, the competition, i.e. Sony and Microsoft, have launched two new game consoles, the Playstation 5 and the Xbox Series X/S. Both consoles boast superior hardware that the Switch can’t match. And there are now a number of references to a new Nintendo console on the Internet. So it’s only logical to ask: When will a successor for the Nintendo Switch appear?

Nintendo itself has repeatedly rejected plans for a Switch Pro based on the new OLED model (1, 2):

“We also want to clarify that we have just announced that the Nintendo Switch (OLED model) will be launching in October 2021, and we have no plans to launch any other model at this time.”

They only wanted to commit themselves to a new console in this century. In the quarterly report for Q2 of the fiscal year 2022 one plans with a new console in the year 20XX - so sometime between 2022 and 2099. So it could still be a few years until the next Nintendo console appears. This is also indicated by a statement by Nintendo President Shuntaro Furukawa during a financial briefing (via “Nintendo Everything”):

“We believe the system is in the middle of its life cycle.”

As already mentioned, however, the net is full of rumors about a Nintendo Switch Pro. We still want to dare to answer the most pressing questions about the next-gen console as best we can on the basis of these: When will the Nintendo Switch Pro be released? How much will she cost? What’s new on the console and what games can we expect?

Note: The following article is based on rumors and assumptions. We try to the best of our knowledge and belief to classify and weigh them up in order to provide you with the most helpful information possible about the Nintendo Switch Pro. However, we can, of course not guarantee the truth of these rumors. The assumptions made may later turn out to be misjudgments.

When is the Nintendo Switch Pro coming out?

The first rumors about the release of a Switch successor came to light as early as 2019. Nintendo of America boss Doug Bowser pretty much denied it at the time. At times, however, Nintendo’s defensive reactions to such news were weaker (via “Gamepro”).

At the beginning of July 2021, a YouTuber reported that the global launch of the handheld was planned for 2022.

VentureBeat journalist Jeff Grubb confirms a 2022 release based on his sources. He also sticks to 4K specs with DLSS upscaling. The assumption that the OLED model must not have been the last is underpinned by the fact that Nintendo brought a proud six 3DS models onto the market.

This also fits the insider report from “Bloomberg”, according to which several game studios are said to have received switch development kits with 4K support from Nintendo. Among them are well-known studios like Zynga. Both Nintendo and Zynga spokeswoman Sarah Ross contradict these statements.

4K is still not completely off the table, as discussed for the release of the Nintendo Switch OLED on October 8th. Accordingly, it was found that the new dock of the Nintendo console has an HDMI 2.0 interface. It is theoretically capable of transmitting 4K up to 60Hz. The predecessors still offered HMDI 1.4.

The continuing shortage of semiconductors speaks for a release from 2023. Nintendo can certainly afford to sit it out and release a new console after the crisis is over. This is also supported by the statement of the well-known leaker “NateDrake”.

The statement by the analyst Piers Harding-Rolls on “GamesIndustry” goes in a completely different direction. He no longer expects a Switch Pro. Instead, he’s convinced that Nintendo will come up with an all-new next-gen console in 2024.

An interview with Doug Bowser at the end of June also indicates that fans have to be brave. He commented positively on the long life cycle of the switch. Consistently good content would extend that to handheld. Nintendo President Shuntaro Furukawa underlines this statement in an interview. Although Nintendo is constantly working on “new hardware, software and accessories”, he will not comment on the status of development.

Our assessment: After the Switch OLED, we think a release of the Switch Pro this year is possible, but after Nintendo’s cancellation it could also prove to be too early. Nintendo will have to deliver by 2023 at the latest in order to keep up with the competition.

How much does the Nintendo Switch Pro cost?

Even if there is no fixed price for a Nintendo Switch Pro, we can estimate the possible range in which the RRP will be quite good. So the price will not be lower than the starting price of the Nintendo Switch because of the improved hardware. This appeared in 2017 for around 330 euros.

In addition, placeholders for the new console have appeared several times in the shops of various online retailers. Here the highest price reached an amount of around 400 euros.

The statements by industry insiders also range in a similar price range. According to “Gamesradar”, the analyst Serkan Toto is set at 399 US dollars (currently 334 euros), “Bloomberg” indicates a range of 350 to 399 US dollars (293 to 334 euros).

However, these speculated amounts may also have referred to the Switch OLED, which launched on October 8th for around $350.

Our assessment: The OLED display of the new Switch brings an additional charge of around 20 US dollars. Any hardware upgrade for a Switch Pro could come with a significant surcharge, analogous to other upgrades during a cycle (PS4 Pro, Xbox One X). However, Nintendo has families in mind and could strive for fair pricing up to a maximum of 400 euros. If necessary, the semiconductor crisis is awaited.

The Switch Pro should be able to trump the current Switch, especially with improvements in the hardware. According to the Japanese site “Gamepedia” (machine-translated), they will actually be considerable compared to the Switch.

Accordingly, the main memory would double from 4 to 8 GB RAM. In addition, with 128 GB, a significantly larger internal memory should be available than with the previous 32 GB. Despite the OLED model, this information remains in the room for a Pro version.

Other innovations include support for ray tracing and DLSS. Thanks to machine learning, the Nvidia technology DLSS (Deep Learning Super Sampling) should ensure better FPS numbers with the same hardware.

This is to be supported by the Nvidia processor Tegra Orin T239. According to the leaker “kopite7kimi”, which is known in the hardware scene, the twelve-core processor will be used in the Switch Pro. At the beginning of July, the code name Dane appeared for an Nvidia chip that is produced in 8nm production. At least that’s what the mentioned leaker says.

Information according to which the Switch Pro should also make a big leap forward with the display probably all related to the OLED model that will be launched in October. However, the Switch Pro should support a resolution of up to 1,440p (2K) on its own display. If the console is connected to the television via the docking station, even 4K (with up-scaling) should be possible. This coincides with another report from “Bloomberg”, according to which a Nintendo employee is said to have asked game developers to prepare their titles for 4K.

NateDrake, who has often been right with his Nintendo leaks, is also in favor of DLSS and 4K. However, he no longer speaks of a Switch Pro, but of an independent new generation of consoles, which he calls Switch 4K from now on.

The Switch Pro could also use a new controller. Nintendo recently filed a new wireless game controller with the FCC (Federal Communications Commission) (via Vooks). This supports Bluetooth and requires a little more power than the previous Joy-Con. With that, the company could potentially fix the Joy-Con drift that has plagued the Switch since its launch.

Unfortunately, there is currently no official information or unofficial rumors about the appearance of the Nintendo Switch Pro. Based on rumors that have already been published, we can assume that the Switch Pro will also have a docking station again and will therefore also be used on the go.

This suggests that with the new console, Nintendo will be heavily based on the appearance of the previous models. However, the console could keep the 7-inch format of the OLED variant.

What games are available on the Nintendo Switch Pro?

Of course, no titles for the Nintendo Switch Pro have been announced at the moment. That shouldn’t come as a surprise, considering the console itself hasn’t been officially launched yet.

Presumably, upcoming Nintendo titles will support them once the console is released. The Switch Pro would thus take the current status of the Nintendo Switch as a current-gen console.

With a view to the Switch Lite, however, we can well imagine that a large number of new games will continue to be released for the current Switch consoles. Only selected exclusive titles, as mentioned by the leaker NateDrake, which depend on the better hardware of the Switch Pro, should be reserved for the next-gen console.

It is currently unclear whether the new Switch Pro will also be able to play older titles without any problems, but in our opinion it is likely.