Nio electric car with a range of 1000 km 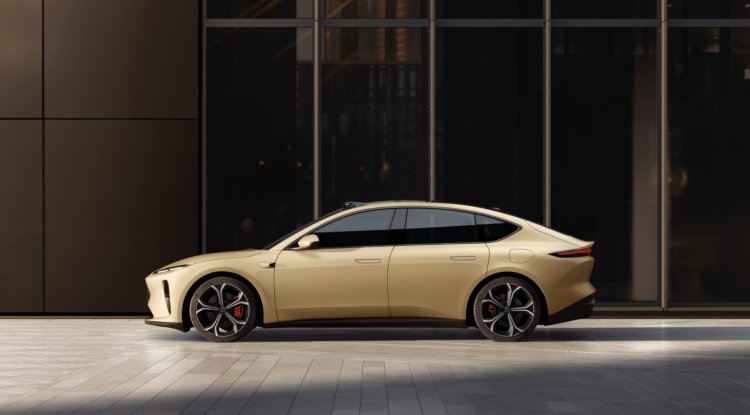 Chinese electric car manufacturer Nio has unveiled its emission-free electric sedan ET5 with a replaceable battery, long-range and excellent acceleration. The ET5 can rocket from 0 to 100 km / h in just 4.2 seconds. The maximum range of 1000 km exceeds the range of the Tesla Model S (only 650 km), which is one of the most powerful cars on the market. This is made possible by a battery that is much larger than other electric cars on sale.

The ET5 comes with three battery options. The standard 75 kWh version offers a range of 550 km, the 100 kWh variant extends the range to 700 km, and the 150 kWh battery provides an ultra-long-range of 1000 km. In comparison, the Tesla Model S uses a 100 kWh battery and the Porsche Taycan Turbo S has a 93.4 kWh battery. The ET5 comes standard with two electric motors and an all-wheel drive.

The battery is replaceable and can allegedly be replaced in just three minutes. This eliminates the need to wait to recharge the battery. Founded in 2014, Nio is currently worth $ 44.8 billion, although it sold only 43,000 vehicles in 2020. However, it plans to expand into Europe, so sales are expected to grow.

The Tesla Model S will cover more than 1,200 km with a new battery

The modified Tesla Model S covered a distance of 1,210 km in Michigan on a single battery charge. It is the result of the work of the startup Our Next Energy (ONE), which claims that its goal is to produce safer and more sustainable batteries. The company equipped the car with a battery that has twice the energy of the original from Tesla while fitting into the same space. It is proof of the concept of the company's own future battery design.

The original Tesla battery had a capacity of 103.9 kilowatt-hours, while the prototype ONE battery, which replaced it in the same space, has 207.3 kWh. It is therefore much denser in energy, but the delivered consumption (in kilometers per kWh) is approximately equal to the consumption of the original battery. The ride took place in Michigan, ie in winter temperatures. The tester drove up and down for 14 hours at an average speed of 88 km / h, and when he finished, the distance counter read 752.2 miles (1210.5 km).

In another much less burdensome test, the company placed the Model S on a dynamometer at a stable speed of 88 km / h, where it ran a staggering 882 miles (1419 km) on a single charge. The next step is to develop a prototype into a new battery called Gemini, which is due to start production after 2023. ONE says it focuses on battery chemistry that is "safer" and "sustainable". In practice, this means lithium-iron-phosphate (LFP) chemistry, which in the past had an energy density 30% lower than cobalt or nickel batteries (and, unfortunately, allegedly cold weather problems).

'Fantastic beasts 3' already has an official title and a new release d...

What is a server and what types exist?

Xiaomi 12S series officially: From a compact flagship to the best came...