photos of MSI's new power supplies from the MEG and MPG series have appeared, which have a 12+4-pin connector and are therefore PCI Express 5.0 compatible. 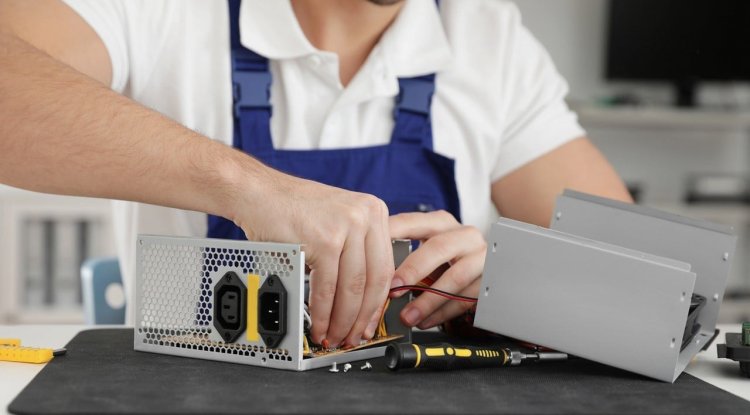 Photos of MSI's new power supplies from the MEG and MPG series have appeared, which have a 12+4-pin connector and are therefore PCI Express 5.0 compatible and can supply next-generation graphics cards. The power packs are rated at up to 1,300 W.

In January of this year, Asus already introduced its ROG Loki series of power supplies with a 16-pin PCI Express 5.0 connector. MSI is now following suit, because photos of the manufacturer's MEG and MPG power supplies have appeared, which have a 12+4-pin connector including the appropriate cable. Power supplies of the MEG series are specified with values ​​of up to 1,300 watts, which would be ideal for next-generation graphics cards that are due to be launched later this year.

New power supplies for next-gen GPUs with up to 1,300 W

While the MPG series from MSI is already known - the most recent release was the flagship power supply A1000G with an 80 Plus Gold certification - the MEG series is newly introduced by the manufacturer from Taiwan. The complete line-up of the two power supply series should be presented this year. This includes two MEG models that are said to be 80 Plus Platinum certified and three MPG models that are 80 Plus Gold. In the case of the former, the power output is in the four-digit range, with a 1,000 W and a 1,300 W unit. These models are also said to be based on the MSI GI engine. The MPG power supplies, on the other hand, are aimed at high-end PCs with models that are said to have 750, 850, and 1,000 watts

With regard to the next graphics card generation, compatibility with PCI Express 5.0 is of particular importance. The scope of delivery should therefore include a 12+4 pin to 12+4 pin cable and a dual 8 pin to 12+4 pin adapter cable. The connection is designed for a power output of 600 watts and thus for PCI-E 5.0 and not for graphics cards of the second or third PCI Express generation. Nothing further is known about availability and prices. We expect the corresponding information in the second quarter of 2022.

In other news, the Power Supply Unit (PSU) is not as glamorous a component as processors or graphics cards. But on the other hand, this is a critical component that you should spend a little time on before you decide to buy.

When someone buys a power supply, you will often hear the advice – take a little stronger than you need and that’s it. So if your need is around 600W, take a 750W power supply and you are calm. That’s good advice, but it’s not the only one. Rather, a PSU is a critical component that powers all of your components. If it is of poor quality, then it could damage other components, and you don’t want that. You want a stable and high-quality power supply that will keep your computer safe. Read the whole article here.