PocketBook Basic Lux 3 is a beginner e-book reader. It has a 6-inch E Ink Carta screen with a pixel density of 212 PPI, gives us 8 GB of disk space. 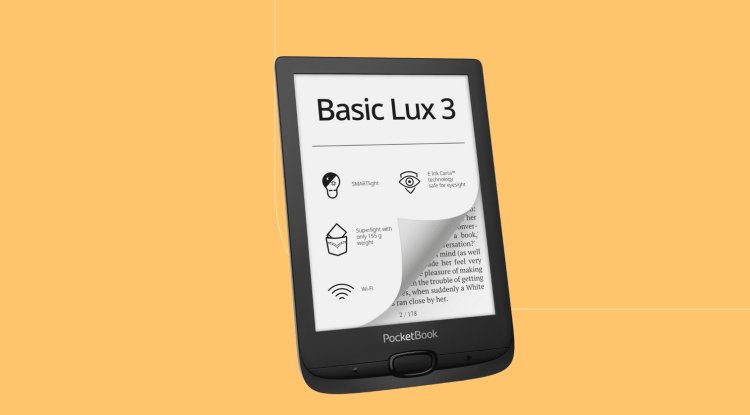 The Swiss manufacturer of e-book readers presented the latest version of its basic model. Let’s take a look at what PocketBook Basic Lux 3 has to offer and how its specifications behave in relation to rivals.

PocketBook Basic Lux 3 is a beginner e-book reader. It has a 6-inch E Ink Carta screen with a pixel density of 212 PPI, gives us 8 GB of disk space, works for up to a month on a single charge and supports all popular formats. It also has Wi-Fi, and all of that is enclosed in a device only 8 mm thick and weighing just over 150 grams. Everything looks decent, but let’s confront this model with others ...

Let’s start with how the PocketBook Basic Lux 3 differs from its predecessor, the model with the number “2” in the name. First of all, the usual basic screen backlight has been replaced by SMARTlight technology. Thanks to it, it is possible to adjust not only the brightness but also the color temperature, which enables a more comfortable reading after dark.

This new model should also work better than the previous one, as the amount of RAM has doubled 512 MB, and the single-core processor has been improved with a dual-core one. Taking all this into account, we can definitely talk about a step forward.

Because the changes, the proposed price has increased - not $89 (as in the case of “Two”), but $118. This puts it almost perfectly between the basic Kindle reader and its solid version with the note Paperwhite.

The most serious rival for this new PocketBook will be the inkBOOK Calipso Plus which costs around $130. The devices have almost identical specifications, but the latter also adds a Bluetooth connection and another 8 GB of memory for books, and the screen is touch sensitive. It is still more expensive, so there is enough space in the market for both equipment. And the decision is up to you.