Intel was probably mainly concerned with showing how good the core utilization is in the then possible configuration of 8+16 cores and a total of 32 threads. 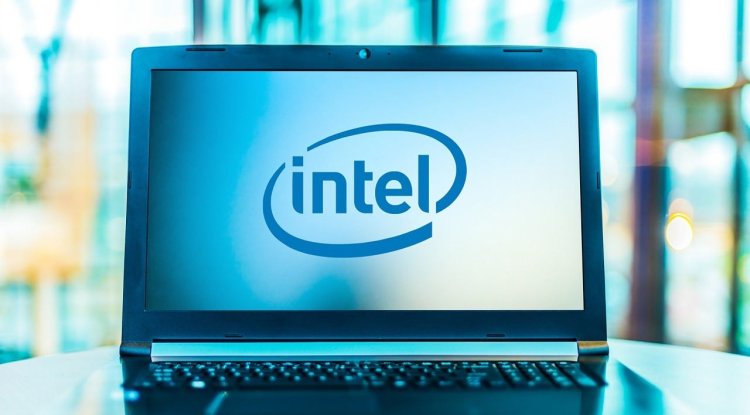 Intel also brought along a Raptor Lake demo showing the upcoming mainstream CPU in Adobe Premiere and Blender. Intel was probably mainly concerned with showing how good the core utilization is in the then possible configuration of 8+16 cores and a total of 32 threads.

Intel also mentioned Raptor Lake at Investor Day, which is expected to launch in the second half of 2022 and deliver double-digit performance improvements and enhanced OC capabilities. The CPU with up to 24 cores and 32 threads consists of up to 8 P cores and up to 16 E cores. As with Alder Lake, only the P-cores can hyperthread. It is produced in the Intel Node 7, previously known as the 10 nm Enhanced Super Fin. As expected, the LGA 1700 socket remains and it is assumed that Raptor Lake will also get the memory controller again, which supports DDR4 as well as DDR5 in order to smooth the transition.

The demo showed selected benchmarks with Blender and Adobe Premiere and was primarily aimed at illustrating the utilization of the cores. As is so often the case with such demos, there were no technical data. If you are interested, you can watch the Intel demo segment in the stream (from around 1:39 hours). Not many conclusions can be drawn from this. Rather a point for stimulating discussion is whether Intel's strategy of doubling the E-Cores is what the market and gamers want? After the small trip to 10 cores with the Core i9-10900K, it quickly became clear that the P-cores would be content with 8 P-cores without an elementary conversion of the architecture. With the E cores, it seems that scaling is more likely to be possible or desirable.

In addition, Raptor Lake is a lot from the rumor mill and is usually quite well informed. The thing about the cores had already leaked out. For Raptor Lake, it was mainly expected that Intel would refine the architecture and not bring any wild innovations. Accordingly, a CPU reported in a benchmark database for LGA1700, which will probably be used for a little longer. DDR5 runs on two channels at 2,400 MHz in the database entry: However, there were rumors that the speed would generally be increased to DDR5-5600 or 2,800 MHz. With Node 7, Intel has to squeeze the extra cores into a very similar TDP window. There have been rumors that Intel can improve efficiency by double digits via DLVR (Digital Linear Voltage Regulator). Along with improvements to the architecture, this could give room for more cores.

In August 2021, the entire model range had already leaked to Raptor Lake and so far there is no evidence that the information there is completely wrong. The top model is expected to be the Core i9-13900K, which according to the documents has 24 cores and 32 threads - 8+16 is the configuration, plus 36 MB L3 cache and 32 execution units of the integrated graphics unit. Among them is a model - probably 13700K - with 16 cores and 24 threads (8+8), which has a 30 MB cache and also 32 execution units of the IGP. At the end of the enthusiast's program is the presumably 13600L named 14-core with 20 threads (6+8), which has a 24 MB L3 cache and once again the 32 EU IGP. On the lower end, what's interesting is that Intel will continue to offer dual-cores, which will likely be marketed as Pentiums.