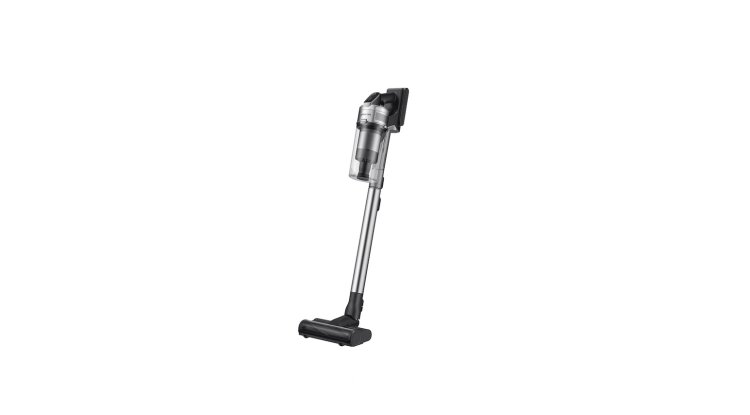 Take matters into your own hands

Samsung Jet series presents their range of portable bagless vacuum cleaners that offer a large selection of accessories to keep the whole house clean. The various models represent the various powers you can expect as well as the many extensions you get in the set or you can purchase later, including of course the batteries.

The Jet 90 model is at the top of the range and in addition to the power in the package, it comes with numerous extensions that we will study in more detail. Let’s start with the main part of the vacuum cleaner, the motor itself which is held in the hand and can produce up to 200 W of suction power according to specifications.

Note that there is a weaker version of the Jet 90 model with 150 W of suction power, and it is best to recognize them by color and product code where the 200 W model starts with “VS20R” code, while the weaker has “VS15R” code.

In addition to the more powerful engine, the Jet 90 premium also gets a larger battery that can run for up to an hour on a single charge in the weakest mode, or up to ten minutes when you set the power to maximum. This power is obtained by a unique “cyclone” design that forces the air into a rotating path in several phases and thus, in addition to better suction, ensures that everything that sucks stays inside the dust container itself.

The engine itself has a power of up to 550 W, and before it the air passes through Samsung’s HEPA filter which will filter up to 99.99% of fine impurities from the air before it is returned to the room. The 21.9 V battery is easily removed and mounted on the charger, and depending on the space, you can buy more to cover the entire space.

They are designed for about 500 charging cycles and will take several years before they need to be replaced. At the front, around the engine, there is a transparent dust container so you can see at any time when to empty it.

Draining is very simple and pressing one switch is enough to release the tank and then pull it out and empty it yourself. Here and there you can gently pull out the air filter and then manually wash the plastic components of the tank.

Dyson as a direct competitor

While using the same multicyclone technologies to get high suction power with dust retention in the tank, Dyson has a slightly smaller tank and its battery lasts about five minutes at peak speeds according to specifications. It can also be wall mounted with one battery only.

Dyson, on the other hand, uses a dust detection system and can show you the level of dirt on the front screen. Another interesting technology is laser floor lighting in front of the vacuum cleaner, which clearly lets you know where you have cleaned, and which areas you need to go through once again to get rid of all the dust. Dyson is also a bit more expensive which is of course an advantage to Samsung’s model.

The story does not stop with the vacuum cleaner itself, but this model optionally comes with the so-called Z station, which serves as a kind of stand for the vacuum cleaner and all its accessories. It is a base that connects to the socket and has its own slot for charging the mentioned batteries.

This allows the base to charge up to two batteries at the same time so that the vacuum cleaner is ready for the next operation as quickly as possible.

The vacuum cleaner is modular and a telescopic tube with a higher level of extension is added to it as standard. At the other end you put some of the extensions, and the main two are intended for vacuuming carpets as well as hard surfaces. Both have a roller at the front to aid in suction.

Hard floors are best cleaned with a soft brush, while a smaller roller with narrow brushes will be ideal for carpets. For hard floors, you get an additional extension that uses wet or dry cleaning cloths instead of vacuuming, and with rotation it significantly facilitates the cleaning of hard floors.

In addition to these main extensions, you also get a smaller one that has a brush around the suction to make it easier to clean the edges of various furniture and chandeliers and get rid of dust in the corners of the room. There is also a narrow extension to reach the bottlenecks, and it can lengthen itself further.

Finally, there is the extension that you add among others and serves as a knee to bend the vacuum cleaner as needed.

All these extensions stand on a stand and are at your fingertips as needed, while the vacuum cleaner will automatically start charging when you clean it. On the holder itself, all the buttons can be easily reached with the thumb, and you have the option of turning on the system and power regulation in three levels.

The small screen will also show you when it is time to discharge, and in case moisture is detected it stops working to protect the components.

While he had no problems on hard floors where a soft roller gently pulls everything into the vacuum cleaner itself, using the right carpet attachment will help scoop out small dirt from the carpet as well as dog hair that won’t tangle unless it’s more extreme lengths. The head of the vacuum cleaner itself is very flexible and more demanding angles can be easily picked up.