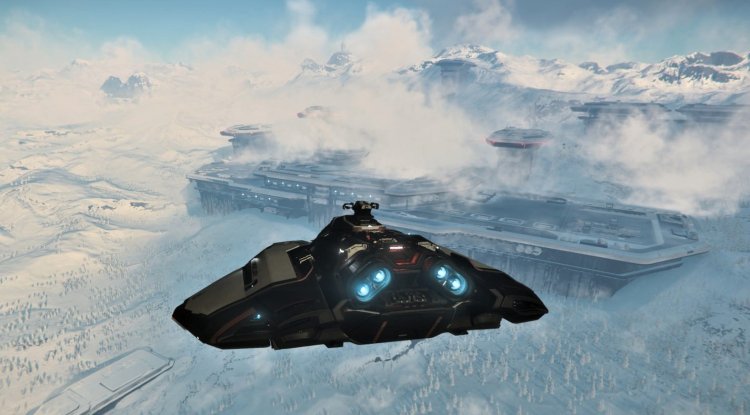 The game's budget will soon exceed half a billion, but the release of the full version is still out of sight.

The development of the ambitious Star Citizen title began as a wonderful dream of a sophisticated space simulator, but years of postponement and increasing controversy have taken a heavy toll on its reputation. Today, therefore, many players doubt that it has always been just a Fata Morgana that attracted beauty, but in fact, only fed on hidden desires.

And we can't blame them. Star Citizen has been in development for more than a decade, and its budget will soon exceed half a billion US dollars, making it the most expensive game of all time. However, the rough basis of what the project creators promised us is not even finished. And in the foreseeable future, it won't be.

But whatever you think of this title, we can hardly deny that it has made a name for itself in the history of the gaming industry, and the finale of its seemingly endless story will cause a great stir in the gaming community. But before that happens, let's recap how this expected project got to where it is at the moment.

The spiritual successor of the famous series Star Citizen was born in the head of a man-game developer and filmmaker Chris Roberts, who created the popular Wing Commander space simulator series in the 1990s. He later founded his own studio, Digital Anvil, under which he directed the film based on the motifs of this successful brand.

However, it burned both the audience and the critics. In parallel with his quest to break into Hollywood, however, he still worked on games that simulated adventures between the stars, namely Starlancer and Freelancer. However, he did not finish the development of the latter game - he left the company after the acquisition by Microsoft - and Freelancer came out in a much different form than was originally announced.

This is what Freelancer, the predecessor of Star Citizen, looked like:

After leaving his own studio, Roberts moved fully into the world of movies. He has produced several projects, the most famous of which is Lord of War, starring Nicolas Cage. He used a hole in the German tax system to finance his films and left the industry after paying for it.

In 2012, however, he drew attention to himself again with the announcement of a crowdfunding campaign to pay for the development of Freelancer's spiritual successor - Star Citizen. The title unveiled no bold statements about the return of innovation to the space simulator genre, and everyone expected the game to be the ultimate fulfillment of Robert's long-standing vision.

At the time of the launch of the public collection, Star Citizen had been in development for some time. The pre-production phase began in 2010, and when Roberts founded Cloud Imperium Games (CIG) a year later, work on the game took off. Due to great ambitions, however, external development teams also helped with the development of the title from the beginning, and the publisher's CIG subsidiary, Roberts Space Industries, took over the publisher's responsibilities.

The original plan was to emulate the Minecraft model - to release an alpha version of the game, attract investors and then gradually add more content. However, the massive success of the community campaign for the Broken Age adventure, backed by Double Fine Productions, showed Roberts the potential to fund the game from the pockets of the players themselves.

The Star Citizen announcement, therefore, accompanied the launch of a campaign to confirm players' interest in such a title while raising some of the money needed. Cloud Imperium Games even created its own website through which fans could contribute to the development - but it did not work and the company temporarily switched to the Kickstarter platform.

In the same year, fans contributed more than six million dollars, a record for community funding. Dared to raise funds quickly and relatively easily, Roberts definitely resented his former intention to involve investors in the project and plunged fully into the world of crowdfunding.

A gleaming tour of space ships

However, the implementation of Roberts' plans required more than "only" a few million. The community campaign thus gradually received new goals, which promised additional content to the final game if enough money was raised. In this way, the game world has grown to 100 star systems and the game has gained several new modes.

But as millions dug up and the pace of money collection did not slow down, the possibilities for meaningful bonus content gradually diminished. The creators, therefore, began to offer players significantly smaller rewards, such as new spaceships.

And so that players can see several models of completed vessels, the so-called Hangar module was released in 2013 - the first available part of Star Citizen containing the corridors of space hangars and several ships. It was a small taste of what the final version of the game had to offer, but it was enough for the players for a while and the campaign broke more records.

Finally, at the end of 2014, the last target of the campaign, set at $ 65 million, fell. By reaching this milestone, players have ensured that there is a wide range of spaceship customization options in the completed game.

But does that mean the collection has stopped? Not by any chance, the Cloud Imperium Games continued to receive generous contributions from enthusiastic fans, just no longer promising any rewards. At the same time, it began selling players specific spaceships and other game items, which one day they will be able to enjoy in the full version of Star Citizen.

The road to the final version was long and winding.

Star Citizen could be released in 2014, according to early predictions made immediately after the project was announced. Despite the fact that it was simply an unfinished version that would be refined over time, this idea proved to be unrealistic. Cloud Imperium Games simply did not make enough progress. Only the Hangar module was available at the time, and after a little delay, the Arena Commander combat module was finally constructed, allowing space fights (and later races) to be tested.

However, by the end of 2015, we were given a sneak peek of something bigger. Cloud Imperium Games has released alpha 2.0, which delivers a more full gaming experience by combining previously released components. These were the initial steps toward the so-called persistent universe, which is a living, playful universe. This aim, though, was still within reach.

At the same time, Cloud Imperium Games complicated the situation when in 2016 it announced the transition to the Amazon Lumberyard game engine (the game had been running on CryEngine 3 until then). Migration to the new technology required further deadlines and the expected alpha 3.0 version arrived with a one-year delay in December 2017.

In addition, the move caused Roberts' studio to sue the German company Crytek, the creator, and owner of CryEngine, for several years. In the end, the whole dispute was settled by an agreement whose details are unknown.

https://www.youtube.com/watch?v=if3E9QYhQ88&feature=emb_imp_woyt When money is not a problem

The money that flowed in from the crowdfunding campaign in massive volumes gave the creators of the game enough freedom not to have to worry about the numerous delays. A staggering $ 150 million was raised in 2017, almost ten times the budget that Roberts had anticipated at the start of the development.

Nevertheless, the game received additional resources from investors. In 2018, Roberts sold a 10 percent stake in Cloud Imperium Games for $ 46 million and two years later secured another $ 17.2 million. This money was primarily intended to cover the costs associated with marketing.

The success of Star Citizen was due to a savvy marketing campaign that enticed gamers to invest in a project with an unknown delivery date. As a result, Roberts and his crew focused their efforts on producing new spacecraft and playable demos, which fueled the game and raised funds for its further development.

The study reportedly addresses trivia instead of advancing key parts of the project. One example for all - out of the planned hundred star systems, only the first one was completed last summer. The company is reportedly developing tools to accelerate this process in the future, but this is still an astonishing situation.

Records are falling, but deadlines are not being met

Between 2017 and 2020, the amount raised doubled to $ 300 million and rose to an incredible $ 400 million over the next 17 months. Star Citizen is thus officially the second-largest crowdfunding project of all time, right after the blockchain platform EOS.IO.

Trailer for the latest version of Star Citizen:

However, the inflow of money has still not stopped, players have contributed a total of $ 432 million. This means that after taking into account $ 63.2 million from investors, Star Citizen's development budget is exactly $ 495.2 million and will soon exceed half a billion. No other game has even come close to that amount.

And while the release of the full version is still the music of the distant future, Cloud Imperium Games is already considering other projects. Earlier this year, it was announced that the single-player adventure Squadron 42, which will be released as a separate title, will see several sequels in the coming years.

How will it all end?

In spite of everything, Star Citizen cannot be described as a fraud. Cloud Imperium Games is proving to be working on the game and development is progressing, just much slower than usual in the vast majority of game projects. In addition, Roberts communicates quite openly how much of the amount he collects each year, although he does not state what salary he or his wife or brother, who are in high positions in the company, receive.

On the other hand, it cannot be ruled out that the game will never be completely completed - at least in the form that Roberts has promised over the years. After all, he is the spiritual successor of Freelancer, and he also did not enter the market in the same form as its creator originally intended. Compared to Star Citizen, it was still a "small project".

How this story of megalomaniacal ambitions finally turns out is in the stars. However, we see two possible scenarios - either many players will be honestly satisfied with the long wait and the gaming industry will gain another gem, or the disillusionment of wasted money will turn into a tearful valley and a lot of lawsuits. We have our tip. And how about you?

BITCOIN THIS MORNING A sharp decline in the value of most cryptocurren...

The British realized that the series 'Allo 'Allo! is full of stereotyp...

Which pays off more: Buying an iPhone 12 or waiting for an iPhone 13?