Right at the beginning, we have to admit and say that we were quite confused when we saw that now again Flip 4 joins the letter "Z" in the name but we will talk about it another time. 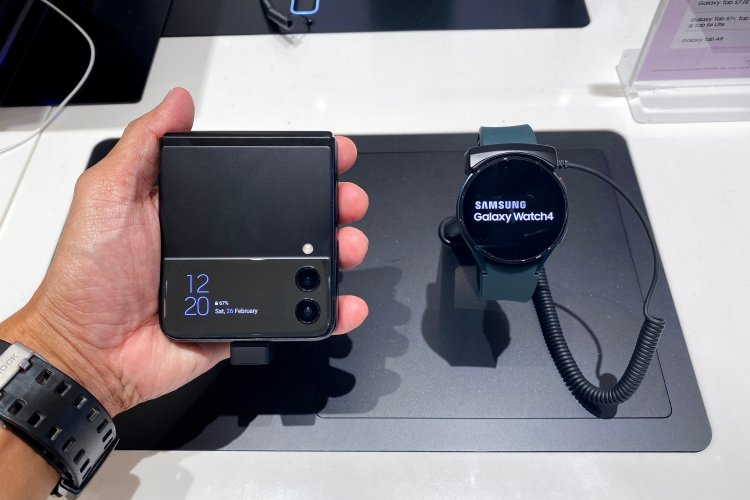 The design side itself is the same as with the Samsung Galaxy Z Flip 3 model, which was previously thought of and how we wrote when we talked about the available renders.

What has been talked about before has now been confirmed, on one hand, the Samsung Galaxy Z Flip 4 brings a smaller hinge, which in turn has less "space" between the two sides when the phone is folded.

We are really happy with the reduction of the hinge because it means that the phone will be a bit lighter and that the hinge will be less striking than is the case with the still current Samsung Galaxy Z Flip 3 model.

According to rumors, a "smaller screen" is located on the front and serves to provide some basic information, taking selfie portraits is now a bit bigger.

From a size of 1.9,” the screen has grown to 2.1”, Super AMOLED display quality. If you were hoping that the fingerprint sensor is now located on the screen itself, unfortunately, we will have to disappoint you.

Its place is still on the right side (right edge) inside the power on, and off button of the smartphone. When it comes to cameras, the Samsung Galaxy Z Flip 4 will not bring any differences or novelties.

It will also be clear that there are two vertically arranged 12MP cameras and it would mean that the selfie camera will come with a resolution of 10MP. Despite the smaller hinge, the phone will be slightly thicker.

It is rumored that the Samsung Galaxy Z Flip 4 will bring the battery capacity to 3,700mAh compared to 3,300mAh, which is found in the Galaxy Z Flip 3 folding smartphone.

Speaking of batteries, we say that the Galaxy Z Flip 4 will have the ability to quickly charge 25W. The specifications of the Samsung Galaxy Z Flip 4 smartphone speak of how the phone will be powered by the Snapdragon 8 Gen 1 chipset and will double the maximum storage capacity to 512GB.

Two months later: Windows 11 is yet to be finished

New BlackBerry: a 5G is in the works