Matte black paint and a thunderous V8 roar mean that flying under the radar in this car is nearly impossible. But that was never the point. 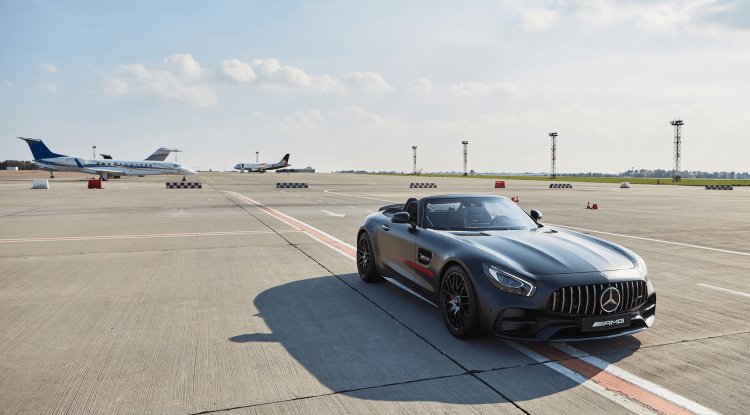 Matte black paint and a thunderous V8 roar mean that flying under the radar in this car is nearly impossible. But that was never the point.

The Stealth Edition package is exactly what it sounds like. For $7150, Mercedes dons the AMG GT with both the AMG Exterior and Interior Night packages, as well as staggered black-painted 10-spoke wheels, black-painted brake calipers, and, for hardtop models, a carbon-fiber roof. Inside, Stealth Edition cars get a microfiber-suede headliner, a microfiber-suede-wrapped steering wheel, and badging on the center console.

It isn’t just the Stealth Edition’s add-ons that earn it so much praise. Nearly eight years into production, the AMG GT still looks thoroughly modern. Its brutish front end, low-slung stance, and Viper-like proportions radiate classic-supercar vibes. It looks especially great from the back, where, for 2020 onward, base cars get rounded-off quad exhaust pipes.

It’s only when you get inside the 2021 AMG GT that it begins to show its age. Despite the fully digital gauge cluster and touch-sensitive steering-wheel controls, the interior reveals just how long this car has been in production. The infotainment screen is large and crisp, but not touch sensitive; the system is controlled via the touchpad mounted to the center console. In a world where everything is a swipe or a pinch away, that becomes tedious, especially while using Apple CarPlay or Android Auto. The buttons and layout remind you that design has moved on since 2014.

The rest of the cabin is a fine place to spend time. Getting in feels like stepping into your own personal two-seat cocoon. The seats are positioned low, which, if you’re short like me, hinders rear visibility. The trade-off is an excellent seating position with plenty of forward visibility. The seats are comfortable and supportive, with substantial bolsters to hold you firmly in place through high-g corners. The pedals are perfectly placed and weighted.

And while this base-level GT might not have all the fancy upgrades from the track-ready GT R or even the midrange GT C, it’s still an excellent car to drive. The steering rack is lightning quick with plenty of feel, while the brakes are tight and easy to modulate. Being the most softly suspended variant in the lineup, the GT pitches a bit more entering corners than we expected, but you’re unlikely to notice if you haven’t driven any of the more hard-core models. Thanks to the now-standard adaptive suspension, the ride remains composed over broken tarmac—impressive when you consider the low-profile Michelin Pilot Super Sports measuring 265/35R19 up front and 295/30R20 in the rear.

The crown jewel of the AMG GT, though, remains the M178 twin-turbo 4.0-liter V8 under the long hood. Since the engine’s introduction in 2014, Mercedes has used it in virtually every top-tier AMG car, and it’s easy to see why. There’s little lag from the hot-vee-mounted turbochargers, and power is plentiful throughout the rev range. Dip your right foot deep into the accelerator pedal for immediate thrust and also for a deep GT3-race-car-like exhaust bellow. Anyone who thinks modern turbocharged cars can’t sound good has never been near one of these engines with the throttle pinned open.

Rated at 523 hp and 494 lb-ft of torque in this trim, the engine is enough to get the 2021 AMG GT to 60 mph in just 3.7 seconds, according to Mercedes. But, like most German carmakers, Mercedes’s acceleration estimates are a bit conservative. Mercedes says top speed for the coupe is now 194 mph, while the Roadster’s terminal velocity is 193.

Then there’s the price. A base GT Roadster carries an MSRP of $130,700, which, on its own, isn’t unreasonable. But in addition to the pricey Stealth Edition trim, it is larded up with optional extras, including a Burmester sound system ($1300), a keyless-go entry system ($800), heated and ventilated seats ($450), and carbon-fiber and piano-black-lacquer interior trim ($2850). Don’t forget to add $1050 for destination, a $1000 gas guzzler tax, and $3950 for that matte paint. The grand total? A whopping $149,250. That price is well into Porsche 911 Carrera GTS territory. And the Porsche is more fun to drive, especially since you can option it with a proper manual gearbox.

But it’s not hard to see why someone might choose the GT over a 911. With its thundering V8 and sensual styling, the AMG bruiser has a sense of theater that a 911 just can’t match.

Even with a near-decade-old interior, this newest version of the GT is a solid choice that’ll bring you tons of smiles, both from yourself and everyone around you. Just don’t expect to go unnoticed.