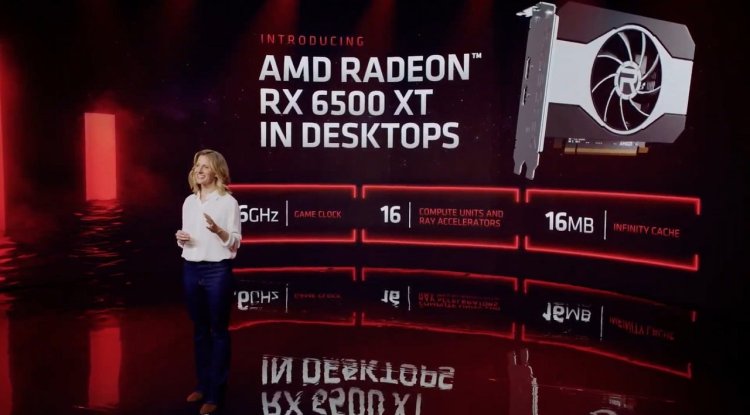 AMD's Radeon RX 6500 XT will soon serve the entry-level segment with RDNA2 but could cause some problems due to the trimmed PCI Express interface. At least that's what one assumes with HardwareUnboxed and shows that users who are initially limited to PCI-E 3.0 might not really enjoy the budget option in the AMD squad.

AMD's Radeon RX 6500 XT is about to go on sale. Apart from the tense situation on the graphics card market and the resulting questionable pricing and availability, entry-level graphics cards could also face completely different problems, as a current video from HardwareUnboxed suggests.

There it is theorized that the trimmed PCI Express 4.0 interface could end up becoming a massive bottleneck for the Radeon RX 6500 XT in combination with the 4 GB graphics memory for most users. As is well known, AMD cuts the interface to just 4 lanes. On paper, there is a bandwidth of 8 PCI-E 3.0 lanes, but only if the graphics card is actually installed in a PCI-E 4.0 slot and the CPU supports the standard.

Against the background that PCI-E-4.0 is still rather rare among price-conscious gamers, who ultimately represent the main target group of the Radeon RX 6500 XT, HardwareUnboxed checked out the acceptance. Although benchmarks for the Radeon RX 6500 XT may not yet be published, the differences between the interfaces with limited lanes and 4 GB VRAM and the associated implications for the new RDNA2 GPU have been worked out using the Radeon RX 5500 XT. For comparison, 4 and 8 GB models of the graphics card were also tested.

In the end, most of the games tested showed significant losses when using an RX 5500 XT limited to 4 lanes when using PCI Express 3.0 compared to PCI Express 4.0 in Full HD resolution. The fps drop in Doom Eternal, for example, is particularly drastic. In the ultra preset, the game is well above 60 frames per second on average when using PCI-E 4.0, even with 4 lanes and 4 GB graphics memory, while the 1% low is 63 fps. With PCI-E 3.0 it goes down to 35 fps on average.

If you compare the 4 GB versions of the Radeon RX 5500 XT with PCI-Express 4.0 x8 and PCI-Express 3.0 x4, the first connection achieves an average of 49 percent more performance.

For the time being, it remains questionable how severe the problem with the Radeon RX 6500 XT could be. The RDNA2 architecture in conjunction with 16 MB Infinity Cache could possibly reduce the performance losses, but not eliminate them. At least HardwareUnboxed promises corresponding benchmarks with PCI-E 3.0 and 4.0 and encourages other testers to do the same so that users of a system with PCI-E 3.0 do not get the wrong impression.