Without Yellow Submarine we can hardly imagine modern animated films like; The Simpsons, South Park, or Rick & Morty. 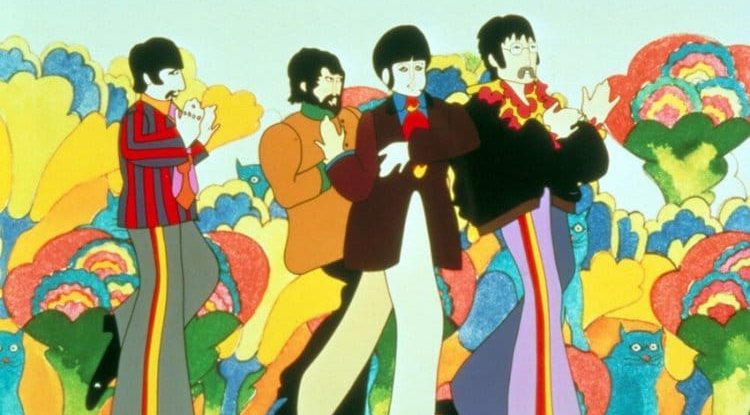 It was this psychedelic animated film from the late 1960s that marked the beginning of modern animation. The yellow submarine, thanks to its dimensional illusions that run through the entire film, leaves a deep impression on viewers.

Such illusions are expressed through miraculous visual images, such as a creature that has a trumpet on its face and gradually swallows the whole world, a yellow submarine that occasionally transforms into a boldly smiling fish, or a Dantean landscape of afterlife species. This is the very essence of animation; the ability to create anything we can imagine and this film realizes the full potential of that idea.

The beginning of a psychedelic story and movie

The story begins at a time of crisis in Pepperland, which is flooded with blue meanies who hate the power of Sgt. Pepper's Lonely Hearts Club Band and thus music, love, and the return of colors to the world. Then the individuals freeze their entire area with blue bombs that fade all color and leave the Pepperland country in a state of blue-gray animation. Old Fred, who is the band's conductor, asks the Beatles for help and they embark on an adventure to save Pepperland.

The psychedelic story is incorporated into the film in such a way as to intertwine a multitude of scenes and unusual characters that in a real world could not lead to any relationship.

For example, in the central part of the film, the Beatles travel through seven seas, which bring some new events and temptations. Like the Sea of ​​Time - where time flows back and forth at the same time.

It is interesting to visit the Sea of ​​Holes, whose landscape is composed of complex oval black holes, where they appear to be able to open either downwards or to the side so that the characters can enter and exit in various dimensions. It is in this work, paradoxically, that the animation begins to eat itself until in the end only a pale nothingness remains.

Thus, the innovative and creative approach of filmmakers comes to the fore, who are not afraid to test the limits of animated film and break conventional rules.

All the way to the Yellow Submarine …

Before the Yellow Submarine, the animation was mild: the virtues were glorified and blunted, but after that, it completely changed and created a new world of animation. The greatness of Yellow Submarine lies in the fact that it marked a revolutionary turnaround within animated films. That is, they were no longer just for children, they have now become a space for creating satire and art and most of all - subversion.

The film was released in the midst of psychedelic pop culture and was well received by the audience, moreover, at that time such works of art were still unknown. In addition to being a novelty, its popularity was brought about by creative images and Beatles songs that run throughout the story.

Like Disney's Fantasy, the film is an all-time musical-animated work.