External SSDs that can take advantage of the performance of the next generation USB-C interface are an increasingly common guest in our lab. 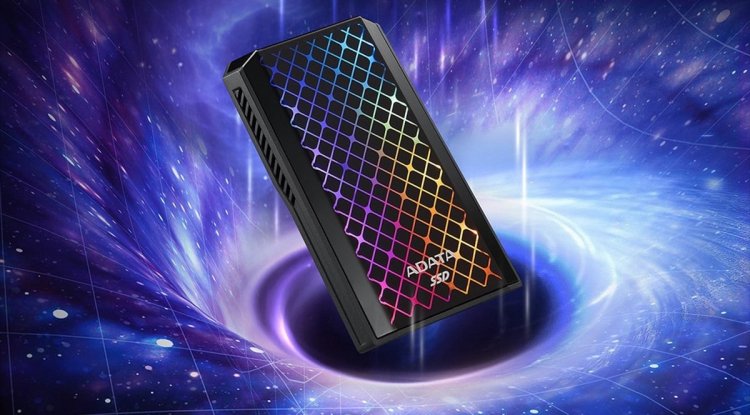 External SSDs that can take advantage of the performance of the next generation USB-C interface are an increasingly common guest in our lab. This time we tackled ADATA's colorful 512GB models

The two devices that arrived for the test respond to the names SE900G and SE770G. Stronger one is available in capacities of 512 GB, 1 TB and 2 TB, and weaker in 512 GB and 1 TB. We got the opportunity to try the cheapest 512-gigabyte variants. In addition to capacity, these devices share many other features. The exterior design is very similar, with a geometric pattern on the upper side illuminated with fixed RGB lighting in the form of a color spectrum. This backlight cannot be turned off since there are no details other than a USB-C port and a small LED to indicate memory access to the device body. The SE900G is slightly larger than the SE770G, but the smaller SSD adorns the case, which is made on the underside in the form of a radiator, which somewhat helps to dissipate heat when the SSD is under load. Although both devices can technically be pocketed, they are not so compact that you will want to do it regularly, especially if we have in mind that to connect SSDs to a computer it is necessary to use an additional cable.

This cable, that is, cables, is supplied in a package with SSDs. Inside the box you will find a cable that has USB-C connectors on both sides, and a cable that is USB-C on one side and USB-A on the other. Perhaps it would not have been bad if ADATA had gone a step further and simply put on a combined cable that has a USB-C connector on one side, and both types of connectors on the other. It should be emphasized that although SSDs can also be used in combination with USB 2.0 ports, the specifications emphasize that a special Y-type cable should be purchased that allows the device to connect to two USB 2.0 ports simultaneously. Otherwise, they will not work due to insufficient power supply. The manufacturer states that SSDs are compatible with playstation 5 and Xbox X, as well as Mac computers, but in some cases reforming is required for work.

SE900G supports connecting to the USB 3.2 Gen2x2 interface, which is why the peak reading and writing speed is 2,000 MB/s. SE770G supports a half-slow USB 3.2 Gen2 interface, offering a maximum reading speed of 1,000 MB/s and a writing speed of 800 MB/s. Please note that the full performance of the SE900G cannot be redeemed without a Gen2x2 port. Although Thunderbolt 4 is in theory faster, in combination with Gen2x2 devices it will behave like a regular 10-gigabit USB port.

What do the tests say? In CrystalDiskMark, which accesses a small part of flash memory, both devices approximately achieve declared performance. We say approximately because SE900G is slightly slower when writing and SE770G is slightly faster than specifications. Another, but probably more important, test is measuring the speed of writing over time. With the IOmeter tool, we write to the SSD for 10 minutes, which in SE900G results in a drop in performance already after 6-7 GB of data entered, from 1,500 to 500 MB/s. SE770G maintains its 1,000 MB/s for the first 19 GB of data, but after that its performance is oscilated by 20 and 200 MB/s – quite defeating. Since SE770G is not much cheaper at the same time, and has a shorter warranty, the SE900G is a better choice provided performance limits are acceptable to you. Otherwise, we recommend buying an external upper-class SSD such as the WD Black P50, but you will also pay significantly more for it.