The new Adata SWORDFISH PCIe Gen3x4 M.2 2280 SSD that we purchased for this mini-review also belongs to this fastest category. 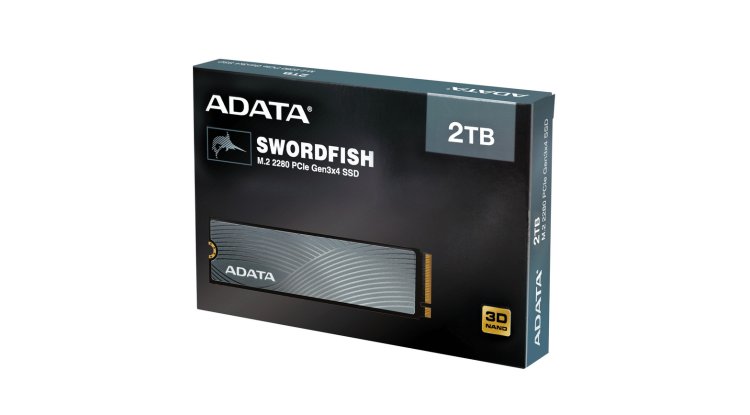 Nowadays, it will be increasingly difficult to find a new computer that has an HDD (Hard Disc Drive) as the primary storage disk. Regardless of whether it is a 2.5 or 3.5-inch model.

In the last ten years (or more) I have not bought a single computer that did not have an SSD for the primary drive. So, this is a disk on which you install Windows OS and other applications that you use every day and which is significantly faster in reading and writing data than classic HDDs. With computers, speed is very important, and storage media, disks, play a big role in that.

However, there are two main categories of SSDs - the “classic” ones, which were created much earlier than the new M.2 modern drives. These classic ones are usually 2.5 inches, they don’t have mechanical rotating parts like the classic HDDs from which they are noticeably faster. The new M.2 drives are noticeably smaller, connect to a special M.2 slot on the motherboard, are much smaller in size (eg as a slightly longer USB flash memory without a plastic case) and are several times faster than classic SSD drives, and far faster than HDDs.

Speed ​​is a virtue

The new Adata SWORDFISH PCIe Gen3x4 M.2 2280 SSD that we purchased for this mini-review also belongs to this fastest category. It is a disk that already explains in its name what kind of model it is. So, it has a new PCIe Gen3x4 interface and is compatible with the new NVMe 1.3 standard, and the number 2280 with the M.2 label tells you about the dimensions of the drive itself - the first two numbers indicate the width (22 millimeters) which is always fixed, while the length can be from 42, 60 and 80 millimeters. In this case, it is 80 millimeters (mark 2280).

What we actually categorize by the speed of reading and writing data and capacity. Since I use several of them, I can tell you first hand that Adata drives are not the fastest in the world, but we can place them in, say, the upper middle class, but again my many years of experience show me that they are very reliable so you can use them for years. For example, you have a 5-year warranty on this SSD, which is more than enough, although I can tell you that it will work much longer.

Specifically, the SWORDFISH models with capacity of 256GB, 500GB, 1 TB and 2TB). The data read speed is 1800MB / s while the write speed is 1200MB / s, random 4K read/write is 100 / 180K IOPS. Realtek’s 2-core ARM RTS5763DL NVMe 1.3 SSD controller is built into the drive itself, which is not the top in terms of speed, but it is very reliable, so it wins 1164 points on the PCMark 10 test. It also supports SLC caching, and as it is a new generation SSD, it is also compatible with the latest AMD and Intel processors and is ideal for installation on both desktops and laptops.

On the bottom, you will see a plate with a sticker that you should not remove because it is a kind of guarantee, while on the top there is a passive gray aluminum cooler that protects it from overheating and is additionally designed with transverse stripes inspired by the look of the diamond, while in the lower-left corner is the company logo.

Although this SSD is quite solid and robust, be careful not to damage any contact when installing it in the slot. You can’t turn it upside down because it has a special “notch” which is a kind of fuse, and when you connect it to the contact (slot), additionally fasten it with a screw on the back to the intended place.

When we talk about data security, it should be mentioned that it also supports LDPC (Low-Density Parity-Check), which is in fact debugging technology. In other words, SWORDFISH can identify and correct any errors in data transmission and thus preserve their integration. It also supports AES 256-bit encryption so your data is additionally secured (password protected) from unauthorized reading.

Also, all owners of SWORDFISH disks can download the Adata SSD Toolbox and Migration Utility from the official Adata website, a software package that you can download for free and with which you can monitor and better manage the disk itself (information, diagnostics, optimization) and customize its work. It will also make it easier for you to migrate data, as well as secure backup.

The company is known for its reliability, which is perhaps more emphasized than speed, but I have no doubt that you will be satisfied with the speed of its work. I was expecting maybe a little higher speed of writing, but considering all the characteristics, it met my expectations. It’s even faster than the XPG SX6000 Pro when loading video games.

Adata SWORDFISH PCIe Gen3x4 M.2 2280 boasts an excellent value for money, cost-effectiveness (low price per gigabyte) is another well-known feature of these SSDs, so you can count on them. The guarantee of as much as 5 years speaks in favor of that. Who is it for? Practically for everyone who wants more from their computer - for programming, video processing, playing video games, multiple multitasking and the like. If speed is your most important feature, then we can recommend the XPG SX8200 Pro SSD, which is about 30 percent more expensive but is at the top of Adata’s offer in terms of speed.