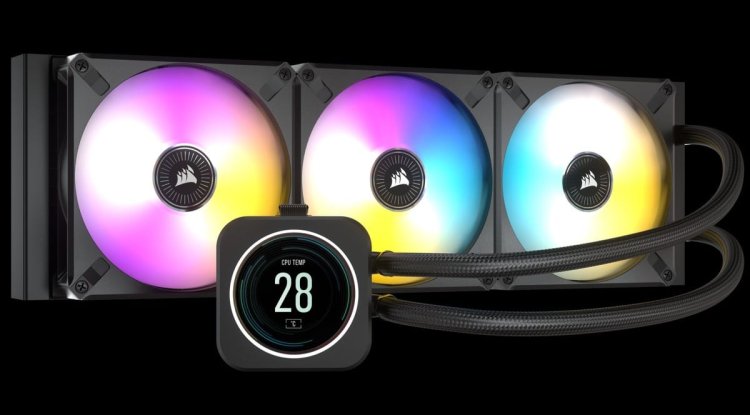 Corsair used the arrival of Intel processors with the new LGA-1700 socket to introduce the iCUE Elite LCD water-cooled series. We tested a model with a 360mm radiator combined with the strongest Alder Lake.

The new cooling series is an upgrade of the older iCUE Elite Capellix series, which we also had the opportunity to try out in the most powerful 360-millimeter version. The design of the water block, radiator, the hose has remained the same as before, and the novelty is the new water block cover, which now has a built-in circular LCD screen bordered by a ring with RGB LEDs and new ML120 RGB Elite fans.

At the expense of this upgrade, Corsair has significantly increased the price of the entire system, so the recommended price of the Capellix model on the official web store is $ 190, while the new Elite LCD costs as much as $ 290. Corsair also offers existing Capellix system owners the option to upgrade to a new block cover, which costs $ 100 - exactly as much as the difference in price between the two complete systems.

The cooling kit consists of a 360 mm radiator connected to a water block with a copper base, a mask for the block, various accessories for mounting on different processors (even Threadripper is supported), three ML120 RGB Elite fans with eight programmable RGB LEDs built into the rotor and Commander Core controller to control fans and lighting. There are, of course, all the necessary screws, including an additional set of screws for those who wish to install three additional push-pull fans on the radiator cooling configuration.

The method of installing the block on processors is simple, but in the case of Socket AM4, it is flawed because the bracket on the board moves, so it is difficult to fix the block with the attached nuts without lifting the bracket on the board from the bottom of the board. Additionally, the crosshead sockets for the screwdrivers on the nuts should have been deeper and larger because the standard screwdrivers intended for the screws used on PCs do not sit properly.

The new fans that come with Elite LCD cooling are visually very similar to the old fans in that they have a black frame and white illuminated rotor, but the novelty is their significantly lower speed (2,000 vs. 2,400 rpm) and additional slats on the rear, exit, currents through the water cooling radiator.

Of course, with lower speeds come lower airflow, lower static pressure, but also drastically lower noise levels (30.4 vs. 37 dBA, according to specifications), but interestingly, Corsair claims that the new fans despite the lower speed and thanks to the different blade and bracket designs, in practice provide better performance than older fans. RGB Elite fans can also be purchased separately, in packs of one or three pieces in the case of the 120 mm model.

The star of this cooling system is without a doubt the cover for the water block equipped with an LCD screen. We have already seen the design where the water block consists of a separate cooling and decorative element on the Capellix models, and here the system has evolved a bit more so that the cover on the block is fixed without the use of tools, with the help of magnets.

The screen has a 2.1-inch IPS, a resolution of 480 × 480 pixels, a maximum brightness of 600 nits, and a refresh rate of 30 Hz. While it would be ideal to use an OLED screen instead of IPS, this would certainly increase the cost of the entire system. For example, Asus has a 360mm system with an OLED screen on the block that costs the same as this Corsair, but it has ordinary, not lit fans and does not come with a fan control controller. Around the screen is a ring with RGB lighting.

For the system to work, the key is the Commander Core controller, which has six ports for PWM fans (DC fan control is not supported), six ports for Corsair RGB connectors, and a port for connecting a two-pin thermal sensor. Three of the six seats are filled on the H150i, and other PWM fans can be connected to the rest.

ICUE software is responsible for managing the system and in general all other Corsair devices connected to the PC. It is this software that is one of the strongest reasons why a fan of RGB lighting would buy this Corsair cooling. With each LED - there are 24 in the ring around the screen on the block, and each fan with eight - it is possible to control separately and arrange the effects in layers. Various predefined effects and profiles of combinations of effects and colors are available, as well as themes that cover all Corsair devices with LED lighting.

Integration with some games, primarily Ubisoft, is also interesting. For example, when Far Cry 6 or Division 2 is played, the lighting of Corsair devices changes and follows the lighting theme in the game. When it comes to the screen itself, we can display predefined animations offered by iCUE, we can load a static image or GIF animation ourselves. The system remembers up to five files loaded like this. A very handy detail is that the RGB LEDs in the ring automatically follow with the color change that happens at the edges of the screen. All in all, visually extremely impressive.

When it comes to managing the performance of coolers, we have four factory profiles at our disposal, and we can also assemble our own profiles, but which work exclusively on fans. Fans of quiet operation can recommend the Zero RPM profile, which will completely turn off the fans while the processor is under low load. The problem is that then the fans no longer look equally attractive, so choose a Quiet profile if that bothers you. The Balanced profile is slightly louder than the Quiet, and the Extreme profile is the noisiest. More advanced or more demanding users will probably resort to manual adjustment of the fan, and this option is not lacking.

We can choose a fixed speed, a fixed power of the PWM signal (ie the percentage of fan speed) or we can compose our own speed curve depending on the temperature. The temperature to be used as a reference can be chosen by ourselves. The software relies on the fluid temperature inside the cooling, and when manually adjusting the fan, we can choose practically all system temperatures - processors, graphics cards, memory modules if we have modules with sensors and various sensors from the motherboard. Another useful and unusual addition is the setting of notifications or actions that iCUE will take in case a certain coolant temperature is reached.

We tested the Corsair iCUE H150i Elite LCD in combination with Intel's currently fastest desktop processor and also the hottest processor on the market. The Core i9-12900K consumes between 241 and 315 W under maximum load resulting in extremely high temperatures. We tested the AIO system initially with a fan speed set to 100% (2,050 rpm, high noise level of 48.5 dBA) and 50% (1,200 rpm, very low noise level of 38.5 dBA). At a maximum speed of 241 W (Cinebench R23 stress test), the processor temperature did not exceed 92 ° C.

By lowering the fan, the situation changes, and in this case, the maximum temperature goes to 100 ° C, which leads to an automatic reduction of the operating clock. The drop in performance is not minimal, but it's still not nice to see the temperature in "red". This prompted us to try different fan speeds. In particular, a PWM pulse of 80% and a fan speed of 1,800 rpm with a noise of 45 dBA imposed itself as an alternative to full speed and there the processor went up to 95 ° C

We also tested a variant where the processor is limited to 190W power consumption which de facto converted it to Core i7-12700K. The new H150i handles this type of consumption without any problems, even with the fan set to a lower speed in combination with which the maximum processor temperature does not exceed 81 ° C. Although Corsair offers the option to change the pump speed, the speed differences are too small to affect the performance of the cooling system, so we used the lowest speed that generates and the minimum noise level in testing.

All in all, Corsair’s AIO iCUE H150i Elite LCD system emerges as a powerful and visually impressive cooling solution that can handle any processor currently on the market. In addition to appearance and raw performance, the striking cooling feature is excellent software control that gives the user great opportunities to fine-tune cooling performance and generated noise, as well as the appearance of the entire system. This AIO system is undoubtedly not the optimal choice for users who want to get the best performance for their money, but it is great for those who want an AIO cooler that combines attractive lighting, great performance, and quiet operation.