The new membrane keyboard from Genesis drives has everything we ask of the input model of the gamer button. 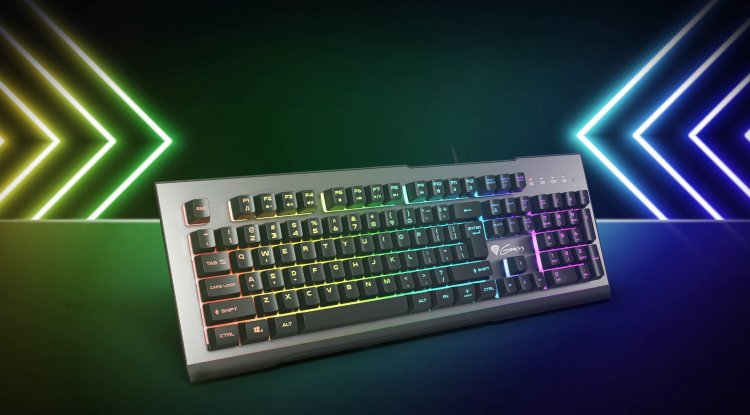 The new membrane keyboard from Genesis drives has everything we ask of the input model of the gamer button.

The momentum of the popularity of mechanical keyboards for players has also accompanied the decline in their prices, so it is not unusual that you read less and less about membrane keyboards on these pages. However, some manufacturers are not giving up on old technology and continue to offer devices that lure players with additional opportunities and tempting prices. One such device is the Genesis Rhod 500 RGB keyboard, which costs only 40 dollars in free sale. For this money, it brings advanced reprogramming options, adjustable lighting, and a very enjoyable typing experience. There are also several drawbacks, but they still do not over-violate the overall impression.

The Genesis Rhod 500 RGB membrane is a full-size membrane keyboard. The tested model arrived in ISO version (large Enter), with illuminated characters. These signs are slightly different in font than those on other keys, so we assume that they are made after the manufacture of caps. The keyboard is adorned with a relatively simple design. On a plastic base, there is a mask made of brushed aluminum, with a thin plastic frame. That aluminum is thin, and it can't fix the keyboard as an aluminum skeleton would, but it's just as rigid as to remember the shape when we bend the keyboard, causing the table to clamber. It's not a keyboard we'd carry in a backpack.

The base is about an inch wider than the area covered by the buttons, so it looks larger on the table than we would like. The keyboard does not have separate multimedia or macro keys, so we control multimedia and shortcuts using the FN key and function keys, that is, the selected keys, with which we can control the lighting. On the underside of the keyboard, there are four rubber tiles, which solidly fix the device in place, and there are two folding legs, on which there are also rubber tiles. These feet seem redundant because the keyboard is naturally angled, and lifting the feet makes it very uncomfortable. The keys are too high as this, so we would be happy to see the wrist support in the package of that keyboard.

The keys on this keyboard have sharp edges, but your fingers easily find the ideal place to press. The membrane below them is very soft and has a tactile response, so it is easy to recognize when we have made contact. Unlike traditional membrane keyboards, this one does not need to be pressed violently, because it sends the signal even before we press the key to the end – at approximately 2.8 millimeters. In addition, it resists approximately 55 cN, which is comparable to popular mechanical switches in blue or brown versions. Typing on this device is a good experience. Tests on the Typingtest.com site show only slightly worse results than the tests performed on our standard mechanical keyboard, which is always a good sign. As expected, typing is very quiet on Rhoda.

The biggest advantage of this keyboard is its additional capabilities. More specifically, in the driver software, it is possible to reprogram each key and assign it the function you want, such as a shortcut, macro command, or similar. In the driver, we can also adjust the color and pattern of illumination, but also adjust user profiles.

This is quite a solid alternative to significantly more expensive mechanical keyboards, which gamers will most certainly be satisfied with. It is not without flaws, but for the price it carries, it is difficult to expect the quality of workmanship that we get from three or four times more expensive devices.