Flex 5 is more or less a classic mainstream laptop, but with the appropriate “spice” in the form of a rotating screen, weight of 1.8kg. 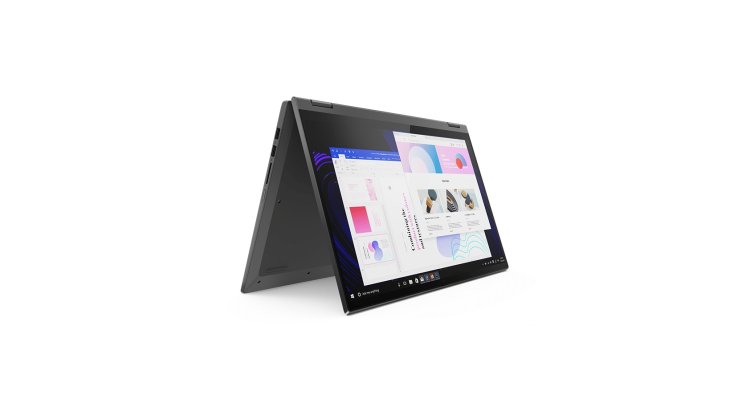 Flexible to the extreme

We have to admit that we are not overly enthusiastic about ergonomics and the implementation of the swivel screen concept in laptops with larger, 15-inch screen. We find that such a large device is not particularly comfortable to use as a tablet. But on the other hand, it is clear that more and more users want to have this option at their disposal.

Flex 5 is more or less a classic mainstream laptop, but with the appropriate “spice” in the form of a rotating screen. Lenovo already has a lot of experience with this kind of screen design, so the machine itself is very robust and has convinced us of its longevity. This is, however, a fairly common laptop for laptops with a 15-inch screen, with a relatively acceptable weight of 1.8kg.

The build quality is very exemplary and we tend to say that it is at the very top among mainstream laptops. The Flex 5 is mostly made of plastic, while the top of the screen cover is made of metal. Lenovo traditionally offers us very high quality and spacious keyboard, as well as a touchpad of satisfactory precision.

You can also use an IPS-based touch screen to interact with the device. The screen responds in a timely manner to all inputs by the user and we can say that it stands out with very good image quality in this price range. Its only drawback is the rather reflective upper surface.

Touch screen as an added value

Given the overall dimensions and weight, the use of this device as a classic tablet is not particularly advisable, but the touch screen certainly has its advantages. With some models from this Flex series, you will also get a digital pen, which further improves the functionality of the device.

Among the positive aspects of this Lenovo flexible series of mainstream laptops is certainly the equipment. It in this case includes a USB-C port, a fingerprint reader, a card reader, as well as everything we expect from a well-equipped modern mainstream laptop.

Lenovo’s hardware relies on Intel’s proven Ice Lake Core i5 1035G1 processor. Overall, the performance of this notebook is very good, primarily with a fairly fast NVMe SSD in the test configuration. Unfortunately, the performance of the processor during the long-term loading of all cores is much worse than expected.

We’re not sure if this is a very low limit on maximum power consumption, so the processor doesn’t get the right clock speed, or the cooling system just isn’t efficient enough. The built-in fan is annoyingly noisy. On the other hand, the battery lasts a very long time, so in terms of battery life, this is one of the best laptops in this test.

Overall, the design, swivel screen and equipment are the strengths of this Flex model, while the performance could certainly be better, especially when it comes to the processor.