Marvel’s Guardians of the Galaxy

Marvel’s Guardians of the Galaxy is a linear game. There is no choosing where to go and what to do. There is no free research or any side tasks. 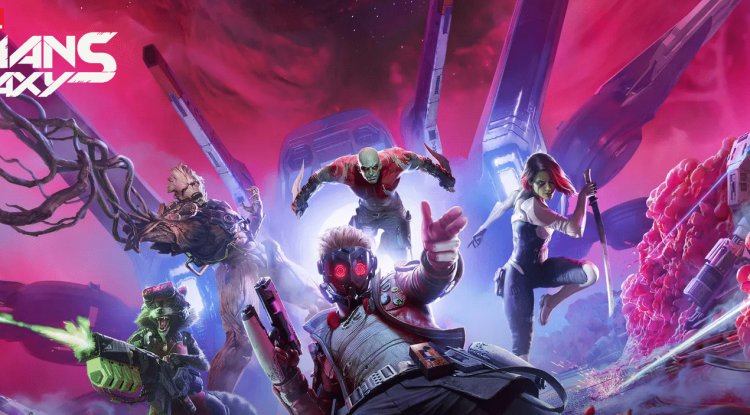 Photo Credits: Guardians of the Galaxy/Promo

I honestly didn’t think we’d see a game like Marvel’s Guardians of the Galaxy these days. We are talking about a single-player adventure that has no elements of an open world. What is happening and who dared to oppose the trend of open-world-looter-shooter-live-service video games?

Marvel’s Guardians of the Galaxy comes to us from the team responsible for the last two games of the Deus Ex series. This is a linear action-adventure that we could describe as a more chatty version of Mass Effect. The game brings an original plot in which we meet a team of guardians (or gardeners) of the galaxy shortly after their first gathering. Star-Lord, Rocket, Drax, Gamora and Groot are relative strangers in this story as they have only just begun to collaborate and are known primarily for their previous reputation. During the game, we watch them get closer as they learn to appreciate and use their differences to the advantage of the collective.

The story in the game roughly adheres to the canon of the origin of the characters and differs from the film universe in several key things. For example, here Drax the Destroyer took down Thanos on his own so Star-Guy and his team never met the Avengers. This means that enough freshness awaits you in this game even if you have already chewed most of it about these characters and their adventures. In fact, you might be pleasantly surprised at how much attention is paid to these characters.

Basically, the plot is that Star-Boy and the team are shifting things from the hollow to the empty - all their business is going wrong, and they owe it to both god and devil. To make matters worse, on one of their missions, they accidentally come into contact with something that has the power to “swallow” the entire galaxy. On the one hand, they are obliged to repair the damage they have caused, and on the other hand, they are a chaotic mess of a team that cannot repair the mutual relations of its members.

Primarily, I mean Star-Dork and the team that are phenomenally realized - at times better than in comics and movies. Every member of the team has some repressed suffering that is manifested by aggression, distancing or something else. But as the characters get closer over time, their psychological barriers fall and they open up to each other to ultimately feel accepted and free.

The dynamics with which all this is presented is very close to the works of BioWare (Dragon Age, Mass Effect), although the Guardians of the Galaxy does not rank among the RPG titles. Some of the features of role-playing are still there, so at certain moments you make decisions that will have consequences for the later course of the story. It’s just a superficial part of the gameplay and the story itself, but it’s done so it doesn’t seem like an unnecessary thing but fits well into the whole adventure.

What Star-Dude and the team are facing here has more layers to unroll. This opponent is a kind of consolation for the broken parts of the character, and fighting him is an atypically personal affair for each character. And if that doesn’t sound like the right tone for the Guardians of the Galaxy, there’s another opponent to play - the huge wife of Lady Hellbender. It may not be as impressive as Ms. Dimitrescu from the last Resident Evil, but it is certainly proof that this game has a really wide lineup of interesting characters.

One is that the characters are interesting in themselves, and the other is that their mutual communication is top notch. There are times when the quarrels between Star-Bore and Rocket are so intense that it is on the verge of embarrassment, the two of them go to war so hard that you think there’s no way they’ll ever reconcile. There are also moments when mutual jokes are hilarious to make you feel sorry for the one they turned on - but still so funny that you don’t want them to stop.

One is that the characters are interesting in themselves, and the other is that their mutual communication is top notch.

It happens that the chatter can’t keep up with the player - the characters start commenting on one, you run on and then you get to the point where they’re already commenting on something else without finishing the previous comment. You practically have to stand still and listen to everything they have to say before moving on.

Marvel’s Guardians of the Galaxy is a linear game. There is no choosing where to go and what to do. There is no free research or any side tasks. It might be weird for younger generations, but I think it fits perfectly with a game of this type. The player is more focused on the story precisely because there is no influence on where the characters will go and what they will do there. Just as things happen to the Guardians of the Galaxy beyond their control, so does the player on a kind of slide he can’t get off. But that doesn’t mean the game doesn’t have any optional content. Occasional research is rewarded by unlocking extra costumes, and by finding certain items you can get the opportunity for optional conversations that will reveal a broader story about your team members.

The bulk of the gameplay comes to a fight that is run through a somewhat unique system. Only Star-Nerd, which has only one weapon, is under your control, but you can order other characters to carry out special attacks. It all takes place in real-time, although the action slows down a bit when you choose which of the four characters to deal with one of the four attacks. At first, this system seems a bit clumsy, but over time it becomes as intuitive almost as the memory of which keys need to be pressed for a combo move in some sort of tobacco. Just targeting by default works with a locked target and that’s a good thing you will fight a bunch of opponents at once anyway, without hiding or using cover.

Apart from special attacks, the fight is also adorned with contextual actions related to the environment. Eg if there is an object in the environment that can be thrown, you can give an order to Drax to throw it at the opponent. Another specificity is the “Huddle Up” system, which is practically time-out in the middle of a battle. When you activate it, you encourage the team which you have to use a specific word from someone else’s comment and make a motivational speech out of it. If you guess, the whole team recovers, and if you make a mistake then only Star-Noob gets a bonus. An interesting thing provided you don’t use it often; and in the end, the biggest benefit is that after the break, great music starts playing.

The game’s soundtrack features some of the greatest hits of the 80’s. With performers like Billy Idol, Mötley Crüe and Rick Astley there are no jokes, and the action gets a totally different context when Europe plays in the background with the hit “The Final Coutdown”. The music in Guardians of the Galaxy is fantastic, not only licensed but also songs recorded specifically for this game.

The action gets a totally different context when Europe plays in the background with the hit “The Final Coutdown”.

Let’s briefly return from music to gameplay and fighting… The conclusion is that it is an entertainment system that rewards you depending on how much fun you have during the battle. With the experience you gain, you unlock additional attacks for the characters, but the promotion system is only incidental. By the last third of the game, you manage to unlock all the attacks, so the last five or six hours of gathering experience and grades during the fight mean nothing to you. And it’s not that the game requires special tactics during combat. No comrade-in-arms attack is actually needed to harm an individual enemy. Just as there are no enemies that can be solved by just one team member. Everyone is everyone’s enemy, and that’s a bit disappointing when you have a team battle in which each member should have a unique contribution.

Visually, Marvel’s Guardians of the Galaxy is a similar surprise as in the story segment. It may not have a large and detail-rich location, but it reaches quality through its characters. They are unexpectedly well animated, especially when it comes to facial animations. Star-Dad is perhaps the least detailed of the entire lineup, which is a bit ironic, but it is noticeable in the game of high-value productions. If not visually, at first glance, then through vocal acting whose quality is hard not to notice with the strong chatter of the characters themselves.

From a technical point of view, I don’t have many objections. I was playing a version for the PlayStation 5 that only had one crash and I noticed a few annoying bugs that took away control of my character and made it impossible for me to pick up a few optional items. More irritating to me were the parts of the game where the way forward was hidden in narrow aisles with no indication of where to go.