Moto G9 Power is definitely able to compete with other models in this class, which have really made a lot of progress in recent years in terms of looks. 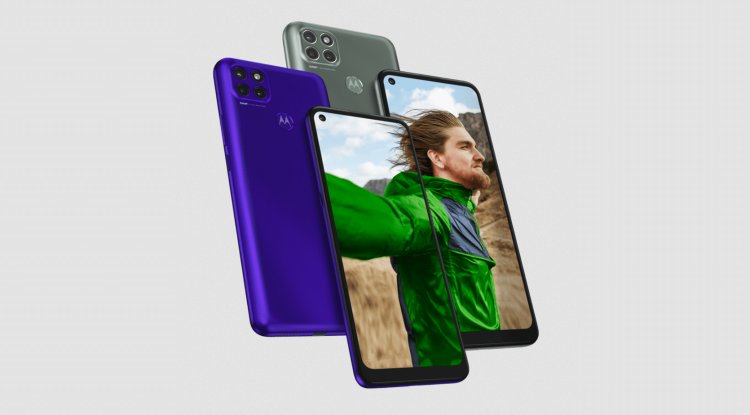 Moto G9 Power is definitely able to compete with other models in this class, which have really made a lot of progress in recent years in terms of looks. The phone is available in two colors, gray which Motorola calls Metalic Sage and purple Electric Violet, and the latter seems to be more visually interesting - it was tested. The first thing that catches your eye when you see this phone live is the texture of the back, which is similar to a fingerprint, and which, in addition to looking interesting, also gives a specific feeling under the fingers. The texture and color in combination refract light so that the phone looks slightly metallic, but very nice and unusual, which sets it apart from other phones of similar price.

The two highlights on the back are the fingerprint reader with the Motorola logo, which is one of our favorite details on this manufacturer’s phone. Another feature is certainly the four-camera system, which is designed in the so-called “ring” style, but with a frame of relatively compact dimensions and in the color of the phone, which overall looks very harmonious and contributes to the look instead of contrast, as it often can be the case with newer models.

The frame of the phone is in the same color as the back, except that instead of plastic we would say it is made of metal because it is noticeably harder and stronger. On it we find the buttons for turning on and controlling the sound on the right, Google Assistant button and hybrid Dual Sim or SIM + MicroSD slot on the left, as well as 3.5mm audio connector on the top and USB Type-C connector on the bottom, right next to mono speakers. Although the smooth surface of the frame looks nice in combination with the textured back, we have to admit that it somehow lacks texture on the frame as well, because it would contribute to the feeling of less slipping when held. True, considering the size of this phone, which is even bigger than this year’s S21 Ultra model, slipping will not be a problem, because so many phones simply have nowhere to go.

17.2 times almost 7.7cm and even 9.7mm thick with a weight of 221g makes this one of the most robust models in this class, especially if you use a very good transparent silicone mask that comes in the package, which slightly increases the dimensions, but the truth for the will makes the phone, somehow even more convenient to hold, with minimal impact on aesthetics.

The thickness is, of course, largely influenced by the aforementioned high-capacity battery, and the size of the 6.8 ”screen, of course, in combination with not the thinnest frames. This is definitely a model for those who like big phones, and which, even in a more favorable class, offers some of the most important advantages that adorn this type of device. The good news is that the phone is not very waterproof, but it is resistant to accidental watering and rain.

The screen itself is IPS type, with a resolution of 720 x 1640 pixels, and thanks to the cut in the upper left corner and the mentioned frames, the screen occupies about 83% of the front surface.

As for the quality of the display, it is a very decent IPS, with correct color display, and a maximum measured brightness of a very good 435 threads, which gives it good enough visibility when you are out in daylight. The sharpness is of course not at the level of what screens with 1080 pixels wide offer because of the mentioned resolution and large screen diagonal, but it will be good enough for an undemanding user, especially in this class, so you will notice perfectly straight edges of round icons only if you turn attention. We have already said that compromises come with a lower price, so in this case, the competition still offers better screens, ie higher resolution, refreshment or brightness, depending on the model, again with compromises on some other things.

What is certainly the biggest advantage of this model is the battery, which is solidly larger than the mentioned models, even 6000mAh, so the autonomy is really extraordinary. Moto G9 Power finished test of 10 hours of Youtube playback with 50% screen brightness with a very nice 66% of remaining capacity, which is one of the best results of a model so far, so it is clear that multi-day use is not a problem for less demanding users, and those more demanding will not have to think about battery and charging during the day, whatever they do. It is worth mentioning that the phone comes with a fast 20W charger.

The fact that Motorola opted for the Snapdragon 662 processor, which offers excellent energy efficiency, with correct, but not spectacular performance for this class, also has a share in battery life. In terms of performance, the Mediatek Helios G90T is even in the lead, but the Qualcomm solution combined with 4GB of RAM with the G9 Power comes, provides very smooth system operation and a sufficiently usable frame rate in games like PUBG mobile. Of course, also thanks to the lower resolution of the display.

As for other hardware, there is for this class rich 128GB of storage, Dual Band AC WiFi, Bluetooth 5.0, NFC with Google Pay support, and even the good old FM Radio for those who have not yet switched to podcasts, Spotify and others innovations.

In any case, there was no saving on the main sensor, so it is not the 48MP that we also often see, but 64MP with an aperture of f/1.8 and a frame width of 26mm, which as we are already used to from this solution provides quite good results. The level of detail is quite good, without the noticeable sharpness filter, which can often spoil the impression, and the dynamic range is excellent, so the camera captures scenes very nicely with a big difference between shadows and strong light, retaining a lot of detail. The color in the photos is very good, and we got the impression that they look even better when you look at them on the computer than on the screen of the phone itself, which is not so common. In any case, the main sensor is extremely useful during the day and you can take very good photos with it.

Also, the focus, which works quite well with photos, is lost during the video, even when the frame is relatively static, so it seems as if this model needs a serious software update regarding video, which we could certainly solve the mentioned problems. As it is, for photos it is a recommendation for this model, but for video, there are better models.

As for the selfie camera, it is 16MP with an aperture of f2/2 and provides quite solid performance and a good level of detail for the device in this price range.