The device in hand is not too big and it is not difficult for me personally to handle it with one hand. The battery has a capacity of 5000 mAh. 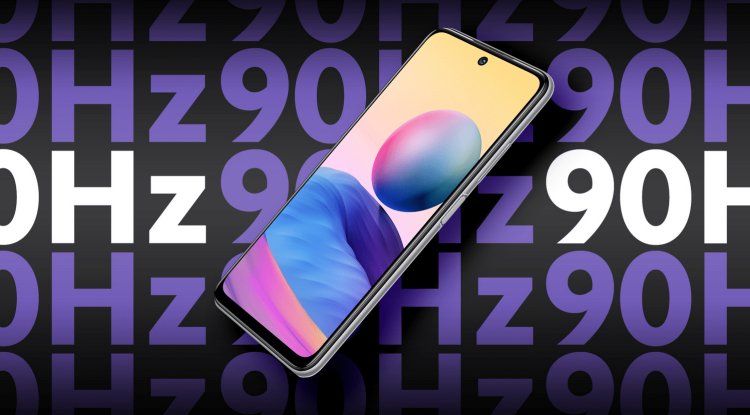 Redmi Note 10 5G is generally very similar to the rest of the Redmi Note 10 series, but there are some less and more subtle differences. The screen here is 6.5" and solidly covers the front, although the frame is clear and noticeable, especially the one below, which is often called the phone’s chin.

The selfie camera hole is also larger than on the other two models. Above is the gap of the called handset, which is just that. This phone does not have stereo speakers. On the left side is a drawer with slots for nano SIM and microSD or two nano SIMs. On the opposite side you will find a volume control button and a Power button with a fingerprint reader. At the top, there are 3.5 mm audio jacks, an additional microphone and an IR remote control blaster.

Below are USB C, main microphone and single speaker. On the back, however, is a slightly different camera module compared to the rest of the Redmi Note 10 series, and it has three camera eyes and an LED flash. The back is covered with a plastic cover mat or if you want a blurred finish so fingerprints and patches are not noticeable. Below is another Redmi 5G logo and that’s it.

The device in hand is not too big and it is not difficult for me personally to handle it with one hand. The package includes a silicone mask that further improves the grip and makes it more comfortable. It is not waterproof, and its front is protected by Gorilla Glass 3 glass and pre-applied foil, which we would like to peel off because it collects stains and fingerprints.

The screen is a step back from the team in this series. Instead of AMOLED quite clearly for cost cutting, we have IPS LCD in FHD + resolution and with 90Hz refresh rate at 6.5 inches. This makes this screen sharper in appearance, but inferior in color expressiveness, angle readability and brightness. Not bad but not as good. The hole of the selfie camera is also more noticeable, but it is now already splitting. The wide diagonal will be quite solid for surfing the Internet, watching movies and even games. Always ON is not supported, but as we have seen it is not on his brothers even though they have AMOLED panels. Its advantage is that it is completely flat, so you can easily protect it with tempered glass if you wish.

Cameras are another segment in which this phone lags behind the Redmi Note 10 and 10 Pro models. The front got a fully basic 8MP selfie camera with support for portraits and 1080p video. It takes ok photos during the day, and only at night if you catch enough light.

He carries three cameras on paper on his back, but there is only one you can count on. It is a 48MP f/1.8 camera with PDAF autofocus and support for only 1080p video. Along with it, it has a 2MP macro and a 2MP depth sensor.

What is clearly missing here are the wide-angle camera and 4K video recording option. The camera interface offers those common shooting modes including Portrait, Night and Professional. The shutter speed is reasonable and supports AI and autoHDR.

In daytime conditions, his camera will take decent photos, by default in 12MP. The dynamic range is not his strong point, and the general look of the photos is a bit washed out. At night, that night regime helps a bit, but the photos are still full of noise.

The videos are decently stabilized during the day, while at night, as expected, there is more trouble and significantly more noise. In short, considering the expected good price, not bad but not at the level of the Redmi Note 10 team.

To enable 5G connectivity at an affordable price, Xiaomi has opted here for MediaTek’s Dimensity 700 chip with eight cores, 7nm architecture and Mali-G57 MC2 graphics. The game has various memory configurations ranging from 4/64GB up to 8/256GB. It also supports memory cards if you give up another SIM slot.

Performance is perfectly OK for more or less all tasks, even in games that run mostly smoothly and without fatigue or overheating. We tried PUBG Mobile, which runs quite neatly. Telephony, GPS and location services as well as mobile and Wi-Fi connectivity are in order. It also has NFC for mobile payments.

The fingerprint reader is located on the side and works properly. With it, you can also drive a less secure Face Unlock selfie camera on your forehead, which works nicely by turning on the face-up screen. The battery has a capacity of 5000 mAh and charges at 18W, although a 22.5W charger is included in the package. Autonomy is very good and even excellent, and my experience indicates over 8 hours of SOT on a single charge when mixed. It takes up to 100% on the included charger for just under 2 hours.