MSI has announced that its current lineup of gaming hardware has received a total of 16 innovation awards for the upcoming CES 2022, including the upcoming flagship motherboard MEG Z690 Godlike, which now has a better look. 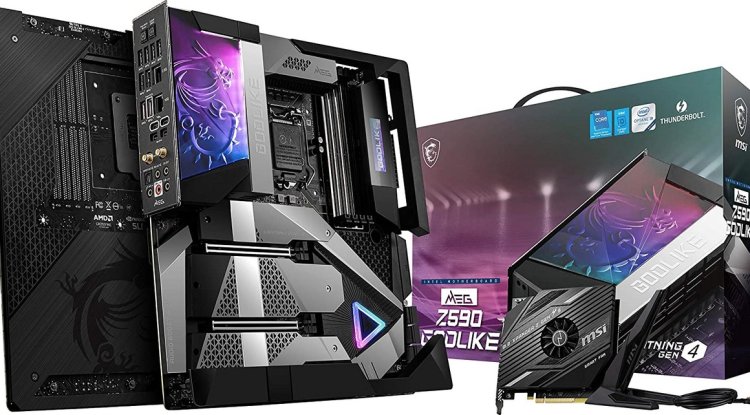 In the run-up to CES 2022, which will start in January, and even before the previously sparsely watchedMSI MEG Z690 Godlike was even announced, the new high-end mainboard has already received an award for innovation from the upcoming electronics fair. As part of this announcement, there is also a good look at MSI's flagship motherboard for the first time, which is intended for Intel's current Alder Lake CPUs from the 12th generation of Core i.  The MSI MEG Z690 Godlike comes in the E-ATX form factor and with 305 x 310 millimeters will be larger than the competitive products from the upper class from Asus and Gigabyte in the form of the ROG Maximus Z690 Extreme (305 x 277 mm) and Z690 Aorus Xtreme (305 x 285 mm).  The board has a large number of RGB LEDs that run across the M.2 slots, the I / O panel and the PCH heat sink. There is also a 3.5-inch touch LCD panel right next to the DDR5 DIMM slots, which displays system data such as core clock, temperatures, and voltage values and can be further adjusted via the MSI Dragon app.  In terms of power supply, the model seems to have at least 22 phases for the CPU alone, according to wccftech.com, while there are four DDR5 banks that support up to 128 GiB at over 6,666 MHz. The board is supplied with power via two 8-pin connections, which are located near the DDR5 slots and are intended to enable simple cable management. Details on prices and availability are still not available, which is unlikely to change until the official announcement by MSI in due course.  By: Olivia J.