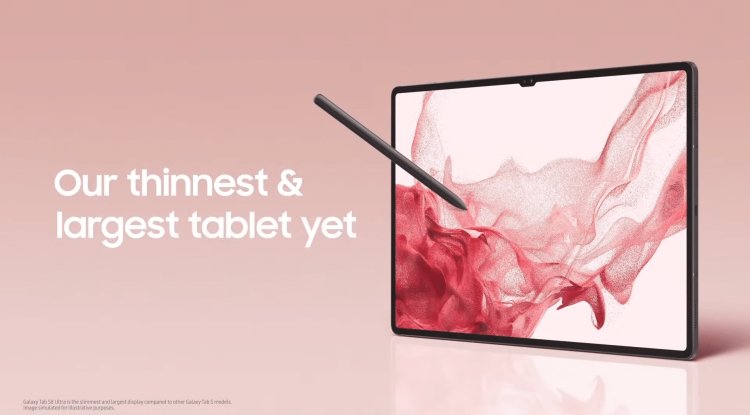 While one of them is premium and looks like a real competitor to the iPad Pro series, the others are targeting the cheaper territory of the iPad Air. Is the Galaxy Tab S8 Ultra a real rival to the iPad Pro tablet?

In terms of design, the Galaxy Tab S8 Ultra has a superior construction, with an aluminum Tough Armor frame (which could explain its weight), a metal back and the thinnest frames ever on a Samsung tablet. Unfortunately, although it looks very nice, it comes in only one color - graphite.

To make the frames of its Ultra tablet the thinnest ever, Samsung had to take drastic measures. As you may have guessed so far, the notch on this tablet is real, and all leaks are correct. Samsung is trying to hide it in the official images of tablets with dark backgrounds, but if you take a closer look, you will see the shape and size of the notch.

But keep in mind that iPhones also have notches and we’re used to them, so the same is likely to happen with the Samsung Galaxy Tab S8 Ultra.

The top of the Galaxy Tab S8 Ultra can contain an S-Pen via a magnet. The official cover of the book and keyboard will also be available for the premium tablet. Both of these accessories have dedicated space for the S-Pen. They come only in black, with a matte finish soft to the touch.

As mentioned earlier, the Samsung Galaxy Tab S8 Ultra has a microSD card slot. You can use it to expand your tablet storage to 1TB. The tablet also has four stereo speakers that AKG has tuned with Dolby Atmos surround sound. The Samsung Ultra tablet uses a fingerprint scanner on the screen.

As you might guess, the largest tablet in the Galaxy Tab S8 series also means it has the largest screen. The Samsung Galaxy Tab S8 Ultra has an impressive 14.6-inch AMOLED screen with a refresh rate of 120 Hz and a resolution of 2960 x 1848. This allows it to have a pixel density of 240 ppi.

You may be wondering why there is a big notch on the Galaxy Tab S8 Ultra case? Well, it has a two-camera system consisting of a simple 12 MP selfie and a 12 MP ultra-wide sensor. Samsung says the latter is mainly for video calls and new video call features.

On the back, you will find another system with two cameras. This time it features a 13 MP main sensor and a 6 MP ultra-wide camera. The tablet can record video at 4K 30fps.

In terms of performance, the Galaxy Tab S8 Ultra relies on the Snapdragon 8 Gen 1 processor. This flagship chip can be equipped with three storage options: 8 GB RAM / 128 GB storage, 12 GB RAM / 256 GB storage and a premium 16GB RAM / 512GB storage. This tablet runs Android 12 out of the box with Samsung’s latest One UI on top, which has many new features and tricks to take advantage of the big screen.

The Galaxy Tab S8 Ultra is pretty well connected. Supports 5G (on mobile versions) and Wi-Fi 6E. It also has a Bluetooth 5.2 connection.

As for the battery, it is 11,200 mAh. That’s pretty big even for a tablet, and according to Samsung, it should be enough for about 15 hours of video playback. The Galaxy Tab S8 Ultra battery may be large, but it doesn’t charge slowly. The tablet supports a fast 45W wired charger that is able to charge the battery in about 80 minutes.

Unfortunately, the fast charger does not come in a box and is sold separately. What you get in the box is an S-Pen and a USB-C charging cable. The Samsung Galaxy Tab S8 Ultra will also have a 15W reverse charge via USB-C. The Galaxy Tab S8 Ultra is already available for pre-sale on Samsung.com.