MSI couldn't get enough of Rapid IPS but has now included Quantum Dot technology into its gaming displays for not only smoothness but also amazing color fidelity worthy of the greatest design monitor. 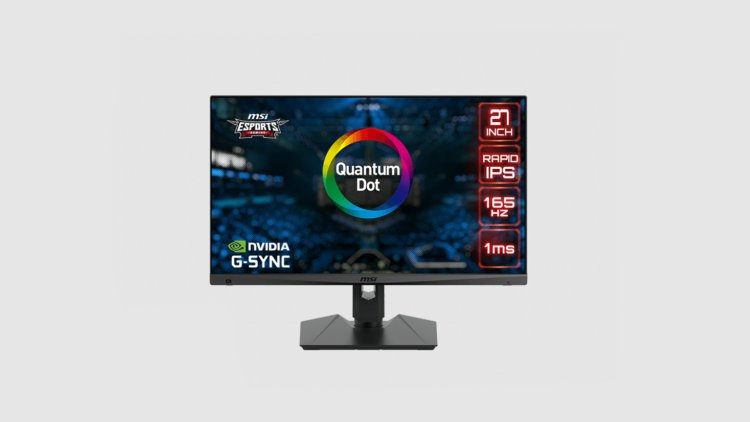 QD was developed to compete with OLED technology by upgrading LCD-based panels, and it is now one of the references, alongside Mini LED, in many new models, not only for TVs but also for PC monitors, where it achieves its real quality. Today we will look at what it is, its benefits, outstanding monitors, and how much it is worth. Let's get this party started!

Before we describe what Quantum Dot is, we believe it is important to understand the technologies to which this approach or type of construction is applied. There are now two main technologies used to create monitors, televisions, and screens in general. There are versions and technical adjustments that try to improve certain aspects such as image, brightness, contrast, speed, consumption, and so on.

LCD (Liquid Crystal Display) technology employs a light source, currently based on a White LED matrix, which passes through a panel of LCD crystals to generate each pixel. The polarization of the crystals is controlled by an electric current, absorbing or letting more or less light flow through, which occurs concurrently in three Red-Green-Blue subpixels with two light filters. This combination enables the creation of colors ranging from black to white across a portion of the visible spectrum.

OLED (Organic Light Emitting Diode) pixels differ in that they are made up of diodes that can emit light on their own. Because there is no backlighting, each pixel, which is also made up of RGB sub-pixels, adjusts its light output to provide the color range. They are believed to have "true blacks" since they are made by immediately turning off the pixel, whereas with LCD merely the light is stopped, and some small amount of it will always pass through.

Samsung was the first company to introduce this Quantum Dot technology, which is applied to its LCD LED televisions.

As a result, it is characterized as a technology for creating a panel of pixels using nanometer-sized semiconductor materials. They can generate colors based on the size of their particles; the larger the size, the more red intensity; the smaller the size, the more blue intensity. They produce more precise, deeper colors by applying quantum-level scaling for particle motion.

The technology has been refined over time, and we now have monitors with high resolution and pixel densities that can achieve high refresh rates and low reaction speeds, such as the MSI Optix MAG274QRF-QD, one of the gaming brand logos. Harmful components such as Cadmium have been replaced by others such as Indium, gradually enhancing the matrices to astonishing performance.

HDR (High Dynamic Variety) is an image format that seeks to exhibit a wider range of color tones in a picture with higher brightness in order to get as near to reality as possible. Quantum Dot evolved from the desire to improve the image at all levels by better regulating light emission in pixels.

The goal is to achieve as near to a depiction of the human visual spectrum as feasible, however, this is not yet attainable, therefore monitors and screens in general are limited to a Color Space. There are others with specific names such as Rec. 2020, DCI-P3, sRGB, and so forth. Each covers a spectrum of hues, depicted as a bell, and space like a triangle. Indeed, Quantum Dot can improve color by adding more colors, realism, and less saturation.

Because of the ability to place increasingly powerful backlighting, the brightness of these panels can be enhanced, with current powers reaching up to 2000 nits and applying extremely remarkable DisplayHDR standards. The existence of nanometric particles allows for the creation of smaller subpixels and, as a result, improved image definition.

And this does not imply that the performance in terms of speed has deteriorated, because qualities typical of gaming monitors have been reached, such as in the two MSI QD monitors, which achieve up to 175 Hz refresh rate and 1 ms response in GTG with a panel resolution of 2560x1440p. On these displays, ghosting is negligible to non-existent, and their latency, while not the best, is very low.

The limitations of this technology have been considerably decreased as displays have been increasingly better optimized. We initially saw issues with HDR and local dimming, which were actually issues with the firmware and its control, which were fixed with an update.

As an LCD-based technology, the one we describe here will undoubtedly have some limits, such as contrast. Quantum Dot does not significantly improve contrast, and we are still limited in dark depth in IPS or VA because of their low realism. It has not been and will not be able to outperform an OLED screen, even with FALD (Full Array Local Dimming) approaches.

Because it is a nanoparticle-based technology, it will be significantly more expensive than "regular" panels, so we must be aware that there will be an additional expense in most circumstances. And, while they support HDR and HDR10+, they do not support Dolby Vision. If the layers are not properly integrated, these IPS-based panels may still be prone to corner bleeding.