Lightyear has unveiled the production version of the “solar car”

Lightyear has presented the production version of the "solar car," whose idea calls for solar panels to provide the bulk of the energy required to power the vehicle. 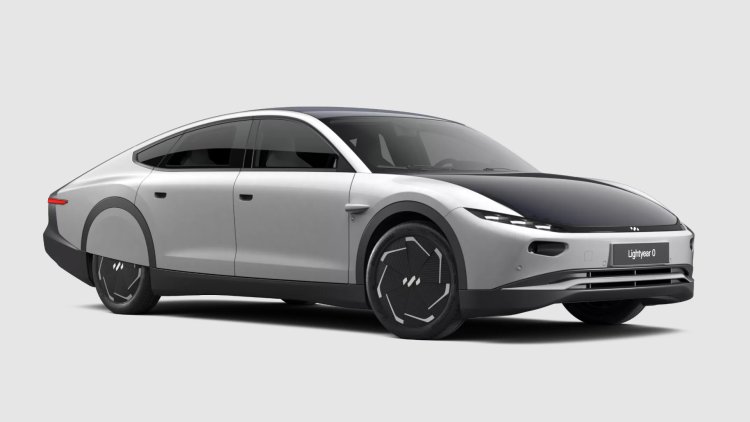 Lightyear 0, the final version, was introduced by the Dutch startup Lightyear. That is, the model of the electric car with solar panels designed by the company should go into mass production.

The design follows the same general lines as the prototypes displayed by Lightyear since 2019, with an emphasis on aerodynamics.

Aside from the extended and flowing shape, there are several elements that improve the aerodynamic coefficient, such as the usage of cameras instead of rear-view mirrors and partially covered rear wheels.

Engineers typically dismiss the use of solar panels to power commercial electric vehicles due to the little effective power that can be collected, even on sunny days.

And Lightyear concedes that this new automobile will be unable to run solely on solar energy because the charging power produced by the panels put on the roof will be around 1 kW - around a tenth of the expected average consumption (10, 5 kWh/100 km).

In other words, five hours of solar exposure should be adequate to charge enough energy for approximately 50 kilometers of autonomy.

Even with partially cloudy days, Lightyear engineers anticipate that customers can travel for two months without charging the car for the average driving profile.

This is based on the vehicle being parked outside during the day. The period can last up to seven months in locations with more sunny days.

The Lightyear 0 can, of course, be charged from external sources, with a charging speed of roughly 30 km/h from an electrical socket, increasing to around 500 km/h at a fast-charging station.

Lightyear anticipates that deliveries of this new electric vehicle will begin in November.  The automobile should cost roughly 250 thousand dollars.

The Lightyear 0 will be manufactured in Finland by Valmet Automotive, which will also create the Sono Sion, another electric car with partial solar charging, beginning in 2023.

Lightyear has already indicated that it will release a more cheap variant, although it will not be available until 2024 or even 2025.

Watch the trailer for the environmental documentary that gathered the ...