Redragon Draconic keyboard and Storm M808 mouse provide a lot for a very low price compared to similar devices from some well-known manufacturers. 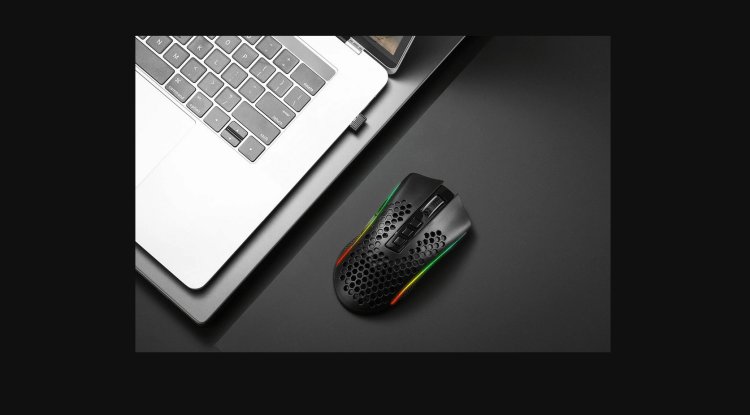 Redragon is a company that specializes in gaming peripherals and now has a fairly wide portfolio of products, many of which are available in our market. This time we tested two of their products, one gaming mouse that follows the current weight loss trend with very good specifications that promise good performance, as well as a compact 60% wireless keyboard that will be interesting to gamers and all other users who are in looking for a wireless keyboard, which you would connect to a computer, smart TV or other device.

The keyboard is so small that it is designed and quiet, everything is packed in the smallest possible format, with a plastic case whose frame is just around the keys and which is about the thickness of the standard key caps. At the bottom of the keyboard are anti-slip rubber surfaces, as well as two feet with which you can place the keyboard at an angle, on the front edge there is only the dragon logo, while on the left there is a USB Type-C port, two switches and two LED indicators.

The USB port is used both for charging the battery and for connecting with a cable, if the keyboard is empty, and you need it, which will definitely be useful to you. The cable that came in the package has a corner connector, about a meter and a half long.

Battery life is about ten days of moderate use, but if you play a lot or type a lot, it’s not a bad idea to charge the keyboard before bed. Battery status can also be seen in Windows when using a Bluetooth connection, as well as via a red LED that will notify you that it is time to charge. As far as the mentioned switches are concerned, one is used to turn on the keyboard, its wireless mode, while it is used with the cable in the off position. The second switch has three positions and is used to select one of the three devices with which you can pair the keyboard at the same time, so nothing fancy switching via the keys themselves.

As for the quality of the connection, it is quite correct and surprisingly imperceptible latency. But, although everything works flawlessly during use or gaming, there are some minor problems, so I noticed that sometimes when the keyboard is not used, most likely because of the energy-saving algorithm it can get confusing, especially when it runs out of battery. In any case, the connection can be reset by combining the FN1 and ESC keys to solve the problem.

As for the buttons themselves, these are of course mechanical switches, Redragon branded, which I assume are actually Outemu OEM variants. The switches are Brown, which means tactical response without clicking, and although in addition to blue this would not be my first choice, I must admit that they are a pleasant surprise because they are much quieter and provide a pretty good typing feeling and relatively low resistance. The caps are standard sizes, depths and shapes, so the keyboard does not require getting used to. In fact, all keys, including Backspace, Enter and right Shift are like on any normal keyboard, but practically the whole numeric part is missing, as well as the middle one with arrows and Delete, insert, PG Up and Down, etc.

Although the numeric part is not used by many, the lack of arrows and Delete keys is something that, if you type something on your computer, you will still miss and which is actually what you need to get used to. All these functions are still there, but they have been moved to a combination of Fn keys and some of the other keys, so Delete is e.g. on the first key to the right Shift, while the arrows on the WASD keys, while, which requires two hands to move through the text - feasible, though not ideal, so there is a compromise when it comes to this model.

The key caps are illuminated with Full RGB lighting with adjustable color and effects, but not individual adjustment for each key. The culprit for this is software that is very modest, we would even say bad, and that only works via a USB connection, so it spoils the impression of seriousness left by the hardware itself.

The Redragon Storm M808 mouse in this test is of normal size, and relatively classic in shape, so it will suit a large number of users who want a serious performance mouse.

As someone who considers the Logitech G203 to be the gold standard among more affordable mice, we have to admit that what Redragon Storm offers for so little money is pretty impressive.

First of all, there is the Pixart 3327 optical sensor of as much as 12400 DPI, which uses e.g. and the HyperX Pulsefire Core, which provides great trekking without acceleration, which is a very important item and not something that is common on affordable mice. Another thing is the extremely soft braided cable that provides significantly less resistance when moving, enough not to disturb you during the game.

Of course, the first thing you will notice is the unusual surface of the mouse itself, with hexagonal cutouts over most of the upper and lower surfaces, which is something we are seeing more and more recently, and which should, in addition to effective appearance, reduce the weight of the mouse and thus providing less resistance, faster reactions and less fatigue when playing for a long time. However, with all the porosity, the weight of this mouse is about 85g, which is the same in gram as the mentioned G203 - it is less than mice of this size, which are mostly between 100 and 120g.

However, due to these shapes on the surface, the mouse looks really good, especially in combination with RGB lighting in the form of two strips along the entire left and right sides and the rim of the wheel. As on the keyboard, the software also allows you to adjust the color and effects, although the same software in this case still works much more functional, because it is possible to map the functions of all keys, program macros, and even record 5 different profiles. located on the underside of the mouse. When it comes to the buttons, in addition to the left and right clicks that have a very pleasant and clear click, there are two buttons under the thumb on the left side, as well as three on the upper surface below the wheel. The wheel itself is rubberized in the middle, with a precise scroll and a short stroke of the button when you press it, but during use we noticed that this click can sometimes get stuck suddenly, in a completely inexplicable way, given such a short stroke. It is possible that this is just a specific copy, so if you often use the middle click, pay attention during the purchase.

Overall, the Redragon Draconic keyboard and Storm M808 mouse provide a lot for a very low price compared to similar devices from some well-known manufacturers. With the exception of the mentioned wheel, the quality of the hardware is very good, so the biggest difference compared to some larger companies is in the software that does not offer the same flexibility and capabilities.