Now you can prepare your own food with the help of various recipes with which you can then get temporary boosts in your statistics. 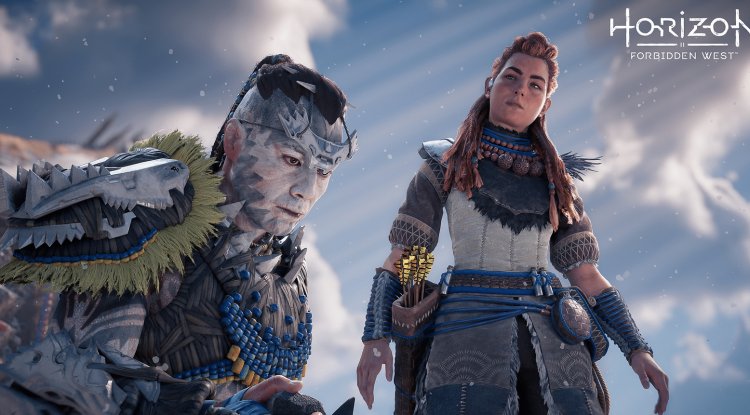 It is known how difficult it is to get out of your comfort zone and create something completely different from what you have been doing for the last twenty years. As Guerilla itself admitted in an interview, they were not sure if critics and players would accept not only the new open-world game but also Aloy, which had yet to show that it has a place with PlayStation icons such as Kratos, Nathan Drake, Joel and Ellie. Guerrilla created a new face that many loved at first sight.

Horizon Forbidden West puts you in the role of Aloy just a few months after the event from the unit where he is now trying to figure out a way to stop a mysterious disease that affects all vegetation. An unstable atmosphere develops great storms, crops and animals die, water is polluted and there is less and less hope for humanity. Bigger and more ruthless machines roam the world on the verge of collapse. Aloy sets out in search of GAIA, which is the only chance to save the human species.

All major and most minor missions are closely related to the events of the major story and significant problems in this world, something we also praised in the game Ghost of Tsushima - so fetch quests are very rare. What we must further mention is that, although this is mostly a linear story, it offers a lot of “reactive” situations. NPCs will react differently during your conversations, depending on which major or minor missions you have solved so far.

Besides the expected visual improvements throughout the visual department - especially in facial animations, Forbidden West has received a bunch of Quality of Life enhancements. You can now automatically save things to your stash when your inventory is full. The fast-travel system is now “free” to use on already detected campfires, and the user interface is now much clearer when compared to the unit.

The big focus is on mastering the terrain, so there will no longer be those situations where you have to bypass smaller elevations because the developers have not implemented a specific climbing mark in that place. Namely, it is now possible to climb almost all parts of the terrain, and with the help of “Death Stranding” terrain reading mechanics, you can see exactly where you can move.

In front of you is a bunch of enemies you can’t fight? No problem, use the rocks next to you and completely bypass them. This new system is really welcome in this series and combined with the grappling hook and a couple of other gameplay elements, the quality and overall impression have been taken to a new level.

As is typical for sequels, Aloy has been given complete gameplay amnesia, which means you start with bad HP and locked up many of the mechanics you unlocked during the last game. This is where a new skill tree comes into play where you can spend your points to boost your skills. One welcome improvement is noticeable in this skill. Tree - melee combat has now received much more attention. This means that Aloy can now learn a range of different melee attacks that require special button-combo inputs, and combined with all the mechanics from the unit - the fights have become even more dynamic.

One novelty was implemented in the idea of ​​preparation for the upcoming battles. Now you can prepare your own food with the help of various recipes with which you can then get temporary boosts in your statistics.

The whole new map of this forbidden west is filled with a bunch of missions, interesting locations, and recent activities. Besides rings where you can compete with your learned melee attacks, the social game Strike is now available in the game, which takes elements of chess and introduces an additional dose of strategy with different fields that can change the statistics of your figures.

When you add up all the new features, improvements and gameplay elements that Horizon Zero Dawn has earned its positive reviews, Forbidden Dawn has taken a step forward in the gameplay system and together with a quality story offered a very good package for fans of this series.

Now the technical side…

In terms of visuals, the game can really look beautiful with a lot of detailed 3D models on the screen, but in performance mode with 60-fps, a weaker anti-aliasing solution is implemented so when you are in situations with a bunch of details and particle effects noticeable that grainy effect of many dashed lines.

Speaking of this anti-aliasing problem it was not noticeable during the cutscene, but then there were some illogicalities in the light and weather - as if these scenes were granted separately in special non-real-time conditions… but it is not it made sense because bugs appeared even then. Whatever rendering method Guerilla Games used, only further highlighted this difference in anti-aliasing.

Of course, not everything is negative in this technical segment. We love seeing a console game with a good main menu, and Horizon Forbidden West goes a step further in that category. The level of detail you can customize is really impressive! You can define how much time slows down when changing weapons, how detailed you want waypoint system, turn on and off reminders of which gameplay system works, the ability to turn on and play with another controller, completely turn off motion blur, define vibration volume, change camera position, adjust sounds for people having tinnitus, individually reduce the level of certain sounds and use a bunch of other settings to better adjust the gameplay.

In terms of fps, Forbidden West kept at a stable 60 in performance mode - the mode in which we primarily played. Yes, there were a couple of situations where we noticed a drop, but more in the cutscenes than in the gameplay itself, so they had almost no effect on the overall impression of the game. The frame rate was also stable in a Quality mode with 4K / 30 fps, which offered an excellent solution to the aforementioned anti-aliasing problem.

What to say about the game in the end?

Despite those technical issues mentioned that can be fixed with a couple of patches, Guerilla Games apparently made an epic RPG series, and with Forbidden West it offered us that sense of intrigue and overall grandeur offered by Mass Effect, The Witcher and Dragon Age. Zero Dawn has laid a firm foundation, and Forbidden West continues to build. Forbidden West is, in principle, similar to its predecessor. With one important difference - everything is better. From stories, characters, and side missions to the world and RPG elements. Fighting with people leaves the most room for improvement. Simply put, the PlayStation has just received another top-notch exclusive that showcases the power of the new PlayStation 5 console. The knowledge and creativity of Guerilla Games in delivering fantastic stories and fun gameplay mechanics in the open world without a sense of monotony - something that few succeed in.