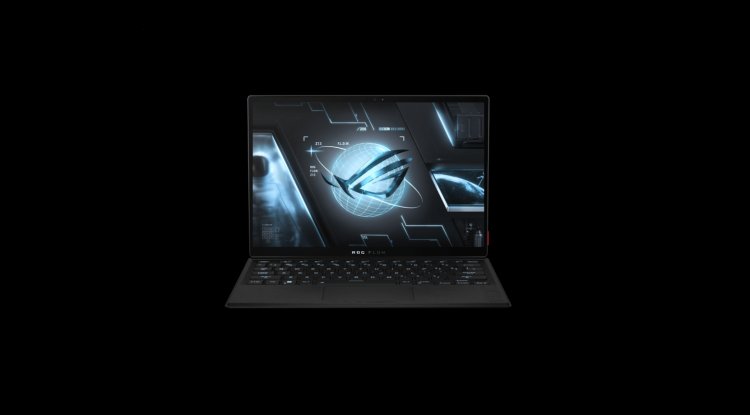 People who work on the go will like the options afforded by a powerful tablet with a keyboard in a detachable shell. The tilting stand at the back allows you to use this device in a variety of orientations, or you may use it as a tablet by removing the cover or turning it back. Of course, due to its powerful hardware, the tablet has enough thickness and weight, allowing you to use it comfortably on your knees, for example, in a chair.

Despite its modest thickness, the tablet is durable and resilient due to its metal body. The display is determined by the tablet's size, which has a diagonal display of 13.4 inches. Because of the diagonal, the resolution of the 4K display, ie 3840 x 2400 pixels, is superb. The 16:10 aspect ratio provides extra portrait space, which is handy when working with documents or photo and video editing software, for example. According to the manufacturer, the product covers 85 percent of the DCI-P3 color space, which, along with Pantone certification and compatibility for Dolby Vision technology, ensures a bright image and genuine color rendition.

Because it is touch-enabled, the display has a smooth surface that somewhat reflects bright places. Support for styluses is standard. The tablet requires slightly broader frames surrounding the display in order to be held in your hands, even vertically.

The rear of the detachable cover with keyboard and touchpad is coated with a material that resembles brushed skin, and the tablet is magnetically held in place. The attachment is two-staged in design. The cover features two magnetic attachment points: behind the tablet's bottom wall, where there is also an electrical connection connector, and behind a portion of the frame under the display, which runs the length of the device. At the time, the keyboard cover had a slightly slanted, better ergonomic position.

The two-stage keyboard grip and the rather strong joints of the folding stand allow you to operate "on your knees," but not as comfortably as with a traditional ultrabook. Despite the fact that the keyboard is detachable, the keys have a relatively big stroke and an effective RGB backlight.

The folding of the stand is made more pleasant by the red flag that protrudes from it, despite the somewhat robust joints. When the stand is opened, you gain access to the micro SD memory card slot. A closer inspection reveals a lid held in place by a single small screw with a Torx head. A module with an SSD in M.2 slot is shown below. The reviewed device featured an SSD disk with a size of 1 TB; if necessary, it can be easily replaced with a larger one; however, you must have a module with suitable dimensions and PCIe 4.0 support, as well as handle the transfer of the operating system from the old disk to the new one.

The designers wished to provide consumers with the option of upgrading without disassembling the complete tablet. Memory chips are connected directly to the motherboard, hence RAM memory capacity cannot be increased. The power button incorporates a fingerprint reader for reliable biometric authentication.

Fingerprint detection is quick and accurate.

Being a member of the ROG game-oriented product family implies an appealing design with industrial style features. The original design element is a translucent window in the shape of an irregular trapezoid, through which a portion of the printed circuit board can be viewed and lighted by many colored LEDs.

The tablet has a 14-core Intel Core i7 12th generation processor and a dedicated NVIDIA GeForce RTX 3050 TI Laptop GPU graphics chip with 4 GB of VRAM, making it far more powerful than it appears at first appearance. The cutting-edge processor features 14 cores and has a hybrid design. Six Performance Cores are built for high-performance operations, while eight Efficient Cores are designed to do typical tasks with the least amount of power usage.

The tablet's cooling system is based on the notion of a steam chamber with two fans. Furthermore, the heated air blowing holes are located at the top, so when the tablet is placed on a table in a width orientation, the cooling efficiency improves the natural flow of heated air, which rises from the bottom up. The Armory Crate app lets you control the fan's power and speed.

In turbo mode, the processor has an operating power dissipation of 45 W, with a short-term rise in running frequency up to 45.7 GHz and even up to 115 W. To this, the NVIDIA GeForce RTX 3050 graphics chip's maximum power dissipation of 40 W must be added. Even with excellent cooling, the 13-inch tablet does not allow you to continuously employ the power of the processor and graphics chip. Despite its 100 W power, even a small compact power source connected via the USB-C connector would not permanently tighten the installed power.

If the tablet's reasonably good graphics performance is insufficient, an external XG Mobile graphics module can be connected to it. It has a powerful NVIDIA RTX 3080 graphics chip and an inbuilt power source that can give up to 280 W of electricity. The external graphics module is attached to the ultrabook via a connector that includes a separate USB-C connector as well as a separate flat connector that contains graphics chip bus signals. The external module's RTX 3080 graphics chip is physically attached through a customized PCIe interface, which is faster than Thunderbolt 4. The link has a 63 Gbps bandwidth that is only used by the graphics card.

The tablet includes two cameras, one of which has an 8-megapixel resolution and can be used to shoot images and record videos. The photo quality is acceptable for everyday use, such as documentary purposes. The webcam above the display has a 720p resolution. Because of the compact size of the tablet, the speaker slots at the bottom point to the sides, and the sound is relatively decent, with a reasonable proportion of lower tones.

The USB-C port is used to connect the 100 W tablet power supply. Thunderbolt 4.0 technology is also supported by this port. Thunderbolt does not support the second USB-C port, which is part of the socket for an external graphics module but can also be utilized alone. The user also has one USB type-A port. The battery, which has a capacity of 56 Wh, provides 7 to 8 hours of average work.

Verdict: An appealing tablet for casual users, with an external graphics module for ardent gamers, as well as engineers, designers, and visual artists that want excellent computing and graphics capability in a small package.