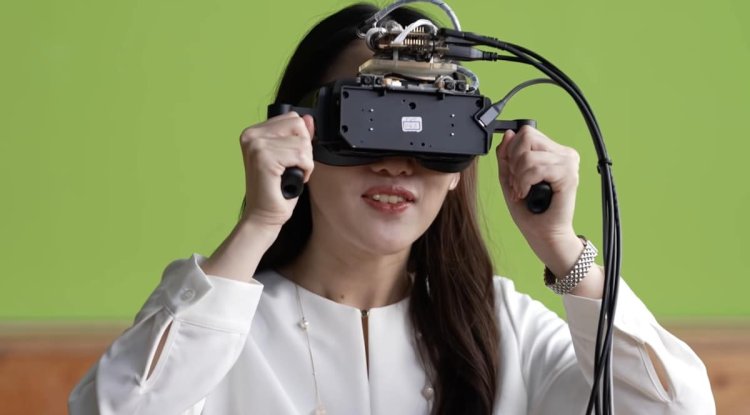 Sony presented an 8K VR headset with low latency at its in-house Sony Technology Day. The headset is not initially intended for the consumer market but could influence developments there in the long term and bring decisive progress.

You can also find out more about this in the video in which Sony shows VR prototype with two 4K OLED panels.

It is a head-mounted display (HMD) for virtual reality (VR) that projects a high-resolution 3D space and achieves a high resolution of 4K with one eye and 8K with both eyes. The high image quality is achieved through multipixel and miniaturization with the help of fine processing and advanced packaging technology cultivated through the development and manufacture of CMOS image sensors, as well as an OLED microdisplay with the device and circuit technology cultivated through the development of displays. Processing time is reduced by reducing latency across the system thanks to the integration of data from multiple sensors. The viewer in the VR can experience high-resolution images in real-time according to the movement of his head.

Sony Group also added that Sony's identity is "a creative entertainment company with a solid foundation of technology," and its purpose is to "fill the world with emotion, through the power of creativity and technology." At the opening of the event, Toru Katsumoto, Sony Group Corporation Executive Deputy President and CTO, said, "I hope to take the lead in uniting the Sony Group's diverse businesses through talent and technology, which will leverage to evolve our products, content, and services in ways that fill the world with emotion."