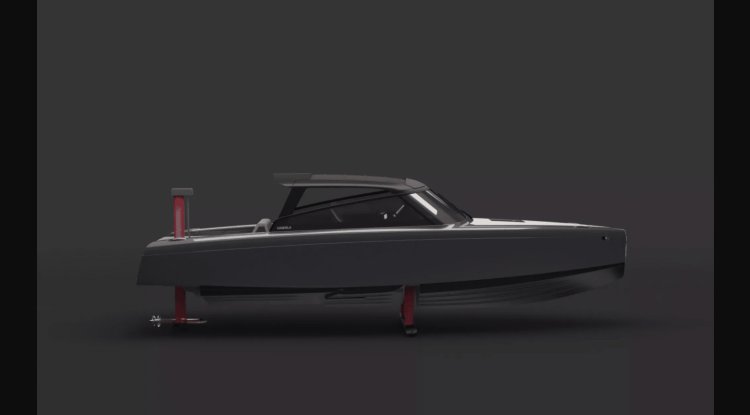 The Nordic business intends to begin manufacturing its second vessel soon, with a production volume of 400 pieces expected by next year.

Candela, a small Swedish business, has successfully tested its C-8, which it plans to mass-produce soon. This vessel combines two critical technologies. It is powered by electricity and, in addition to traditional sailing, can "fly" on underwater wings, making it incredibly efficient.

When these features are combined, they provide additional benefits such as very quiet movement or much more comfortable driving with a lower risk of sickness when compared to the combustion model. The concept is not limited to small-crew vessels. Candela is also preparing to build a water "bus," which Stockholm City Hall has previously ordered. A possible competitor who intends to employ hydrogen fuel cells rather than batteries has a similar ambition.

Technology for ships from 12 to 300 passengers

Candela was founded in 2014 with the goal of introducing large-scale electric propulsion to the sea. After nearly two years, the Stockholm-based company had a prototype ready, and in 2019, it began production of a 7.7-meter C-7 boat. The next year, it became Europe's best-selling electric boat.

Last year, this honor went to the second model, the C-8, with a length of 8.5 meters, for which Candela received over a hundred orders. With this figure, the ship also outperformed the majority of the luxury category's combustion competitors.

Candela intends to build 400 C-8 boats starting next year. This is not her only offering; larger vessels are also in the works. The P-12 cab and the tiny P-30 ferry, which the Stockholm city government envisions, play an essential role in the company's plans. As a result, in addition to private persons, the startup's consumers will include public bodies.

The numbers represent the models' approximate capacities. However, 30 passengers are not the maximum capacity of this concept; according to the Swedish company, the technology can be scaled for vessels with capacities ranging from 12 to 300 passengers. More underwater wings and propulsion units will be required for larger sections.

Electricity changes the rules of the game with hydrofoil

Candela's design was heavily influenced by the C-Pod drive. Retractable submersible wings are not a new concept; they initially emerged in the mid-twentieth century. They were utilized in our region by the legendary Rocket, which had been anchored at the harbor of Bratislava for many years.

Because the butt fitted with an internal combustion engine attached to the propeller must remain below the surface, a substantial portion of vessels equipped with the so-called hydrofoil system lifts just the front part. Others make use of a complex propulsion system. Because the entire powertrain may be combined into a constantly submerged portion, electricity changes the rules of the game. As a result, the ship's entire hull can be lifted out of the water.

The elevated location further decreases the amount of resistance that the drive must overcome. The C-8 model employs the ultimate C-Pod system, which consists of two electric motors operating one propeller separately. Their propeller blades rotate in the opposite direction to reduce adverse impacts on propeller life.

Water is used to cool electric motors. The drive has no transmission and requires less maintenance. Candela claims a 3,000-hour service interval. This is often a fraction for internal combustion engines, which is reflected in running expenses.

The boat's consumption is extremely low, as the energy requirements are up to 80% lower than those of a regular vessel due to the submersible. The hunger hits 0.8 kWh per nautical mile at twenty knots (1.85 km). The Candela C-8 has a 44 kWh battery, which allows it to go more than 50 nautical miles (almost 93 kilometers). A three-phase 32-amp charger is to charge the battery in 2.5 hours.

A computer controls the operation of the hydrofoil system, which assists both the driver and the passengers. Congestion acting on them is up to 95% less here than on conventional ships. Because the hull does not land immediately on the surface, the risk of so-called seasickness is greatly reduced. The ship should be able to manage medium-sized waves in this setup.

There are also other advantages to the notion. A little furrow remains behind the vessel since it only slightly alters the level in the higher position. It can even brazenly add gas in residential regions. This is often a problem with historic ships, not just because of noise, but also because of exhaust gases from inefficient engines that typically use inferior grade fuels.

Other current alternatives can be found on the electric "flying" ship. Aside from the basic controls, the captain includes a 15.4-inch touch screen with an operating system that can be upgraded over the Internet. There is no link to the mobile application. The equipment also contains the Autopilot function, which uses more than ten sensors to maintain the selected course.

Candela isn't the only being who has "rediscovered" the benefits of underwater wings. This method is being tested by a large number of people. According to the Drive portal, it was recently retested by the US military decades later. She did, however, rely on an internal combustion engine.

Along with the Swedes, the Swiss startup Jet ZeroEmission is attempting to combine hydrofoil technology with environmentally friendly propulsion. In Dubai, he plans to build a luxury floating (or flying) capsule for 6 to 8 people that will be powered by a hydrogen fuel cell. A larger vessel with a capacity of 26 to 32 people will employ the same technology.

Both of this company's ships are still solely on the computer. According to Robb Report magazine, a possible Candela competitor wants to begin manufacturing of a smaller model within the next year; however, no dates for the ferry have been announced.

Given the Nordic company's success, it is reasonable to predict that more businesses attempting to build competitive products will emerge. It will also not be strange if similar models are introduced by well-known conventional shipbuilders.