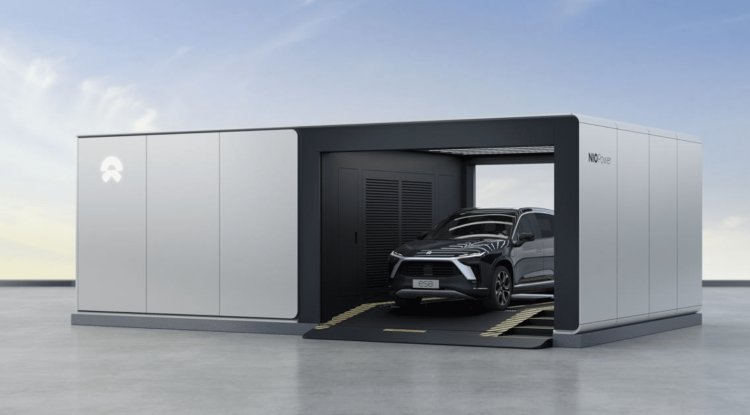 Several Chinese automakers and the local government believe in a user-friendly system, despite the fact that it is plagued by extremely severe challenges.

Despite advancements in charging, many motorists are discouraged from purchasing an electric car since it takes longer to charge than it does to refuel. As a result, the concept of swiftly replacing an empty battery with a charged one has been around for a long time.

The solution, which is particularly well-known in small consumer devices, is helpful to the user. The technology is being tested in Asia by taxi drivers riding rickshaws since it only takes a few minutes and allows them to continue driving. Taiwan has had the most success so far in the electric scooter category. Local Gogoro and Ionex networks are now expanding, as are European countries.

Furthermore, in the ancient continent, the construction of exchange stations for electric car batteries is planned. The first was opened last year by the Chinese manufacturer NIO, which promoted the plan on Chinese soil. Her company is followed by others from the world's most populous country.

The Chinese government has approved the construction of thousands of such institutions. Several corporations, however, have previously rejected this approach. It has a number of drawbacks, some of which are nearly insurmountable. As a result, the concept now only makes sense under limited circumstances.

This is not a novel concept; various companies have been experimenting with it for quite some time. Mercedes, for example, experimented with it in the 1970s. Until recently, the Israeli firm Better Place, founded in 2007, was the most significant point in its history. Wired magazine, for example, featured its pilot station. The new company drew a large number of investors; in March 2013, the Guardian reported on a financial package worth approximately 850 million dollars.

At the time, the Better Place network intended to feature 37 stations at home. The first European institution of this type, near Copenhagen, opened its doors in 2011. Green Car Reports reported at the time that plans were in the works to establish 20 facilities in Denmark.

Furthermore, the company's founder, Shai Agassi, announced the expansion of the apparently revolutionary system not only to other parts of Europe, but also to Australia, China, Japan, and the United States. The ultimate scheme, however, failed. According to Quartz magazine, the corporation converted up to $812 million in capital or nearly all of it. As a result, it declared bankruptcy in May 2013.

The main issue was that Better Place was unable to persuade more cars of the significance of its solution. It only signed a memorandum of understanding with the Renault-Nissan Group. He created an enlarged rear part for the Renault Fluence ZE car. The battery was kept below the back seats and could be replaced from below.

The production of 100,000 cars was originally mentioned as part of the collaboration, but because of the low price and short-range, the company only sold a fraction of them. The actual figure is not publicly available. Individual sources differ in volume, with 500 to 1,500 customers interested in purchasing an electric Renault on the Israeli market. The stations themselves were also a source of contention. They took up a lot of space and needed to be serviced, so they only functioned during the day.

Shai Agassi, the company's founder, initially stated that he would create one facility for half a million dollars. According to IEEE Spectrum, the stations are four times as expensive. Furthermore, the first public fast chargers began to appear about the same time, putting the effectiveness of a not-so-simple battery-switching strategy in jeopardy.

Better Place also constructed charging stations. At the time of bankruptcy, there were 770 of them on Danish land, which was a large amount for the period. The network was later purchased by the German conglomerate E.ON, according to the homepage of the European e-mobility project NSR. He was, however, uninterested in the ostensibly revolutionary exchange stations.

The American Tesla, which openly boasted about it for the first time in mid-2013, also tried this approach. Elon Musk delivered it in his trademark theatrical style. Tesla only had one station in Harris Ranch. However, it was not a public initiative; rather, the Los Angeles Times reported on an internal test with a small fleet of cars.

According to the Teslarati portal, the factory was scheduled to close in 2016. Customers apparently did not show enough interest in this method of "charging," according to Martin Viecha, the chairman of the California carmaker's investor relations department, in a recent interview.

This result is not startling in any way. Unlike the described Fluence ZE model, even older Tesla electric cars have a good range on a single charge. Furthermore, at the time, the California-based firm was already constructing a dense and well-functioning network of Supercharger stations.

The concept is mainly being pushed by carmakers from China

Local battery replacement efforts have also occurred in China. However, it took several years for the technology to truly advance. NIO, a young automobile manufacturer, was instrumental in popularizing it. In the most recent records, he mentions 836 completed Power Swap devices, but by 2025, he aims to raise this number to 4,000 globally.

NIO is currently expanding into European markets through the development of exchange stations. The company will collaborate with international oil giant Shell to construct them. The company declared at the opening of the first station in Norway that by the end of 2022, it hoped to have 20 operational Power Swap Stations in the country.

Furthermore, other domestic automakers are working in China to establish their own networks. According to Reuters, the big manufacturer Geely intends to have 5,000 exchange stations ready by the middle of this decade. As a result, he clearly wishes to surpass the NIO. Aulton, which is owned in part by British Petroleum, reported twice as many points, according to the Elective portal.

As early as 2019, the China Daily claimed that Beijing Electric Vehicle (BJEV), China's largest electric vehicle maker, desired 3,000 charging stations by the end of 2022. The company had a working 225 as of November 2020.

Both the Chinese government and the battery giant believe the scheme

Last year, the Chinese government also backed this arrangement. The state revealed a proposal to establish 1,000 of its own exchange stations, according to the Cnevpost website, citing documents from the local ministry. It also anticipates the sale of 100,000 undefined suitable electric vehicles. According to the government, it will save 700,000 tons of gasoline and more than two million tons of CO2 per year.

A number of startups in San Francisco are also attempting to resuscitate this technology. He commutes to work in a customized Nissan Leaf, exactly as he did at the outset of his Better Place career. The American company, on the other hand, mentions the ability to adapt the system to any car with any battery. He even says he'll finish it in 2-3 months.

A major contender, the Chinese business CATL, recently proposed a similar concept of removable batteries for electric vehicles. It is currently the world's largest battery maker. The company has added the Evogo product to its portfolio, which, unlike most similar solutions, is based on collapsible battery modules.

CATL has designed distinct Choco-SEB articles that do not conceal their source of inspiration as chocolate bars. According to the manufacturer, one unit with a capacity of 26.5 kWh should provide a range of approximately 200 kilometers. He can travel to the car alone, in couples, or in groups of three. The standardized exchange station should be able to accommodate 48 modules. For the time being, it will be available in ten Chinese cities, with more to come.

This format demonstrates how the inherent flaws of this system might be mitigated in part. Individual electric vehicles have a poor level of interoperability. The introduction of uniform battery modules could solve the problem, but no global move to a single standard is currently anticipated.

Technical and electrochemical battery formulations are now highly guarded secrets, and no voluntary patent interchange is planned, at least not yet. Gogoro's choice to share some of its know-how for free in the significant Taiwanese market proved critical in the electric scooter area. Today, it is the market leader, and it has an absolute monopoly with its battery partners.

With today's diversity of electric car batteries, certain brands would also require a number of different exchange stations, but some associated concern models offer some degree of portability. However, the current situation necessitates the establishment of numerous rival networks with similar infrastructure. Charging connectors are not universal, however, CCS / Type 2 forms have become more or less standardized, at least in Europe.

In certain circumstances, exchange stations may make sense. For instance, in the case of major taxi or courier companies with a fleet of only one type of vehicle (or several compatible ones). At the same time, such businesses realize the necessity to replace the battery as soon as possible while still being able to work.

The exchange system has several problems

However, there are some significant flaws in the system. Unlike scooters, manual repair of electric car batteries is not an option due to their weight of hundreds of kilos. As a result, the operator must provide the robot. Not only does it require the handling mechanism, but also different guidance sensors, a control unit, and its own cooling. Temperature management is also required for rechargeable batteries.

The station uses some of the energy that would otherwise go directly to the batteries of electric vehicles. As a result, from a certain perspective, its functioning represents a waste of electricity. Furthermore, the presence of a specialist is required, whether to assist with precise parking or system operation. For the first time, even a complete layman can use the charger for the first time.

Despite the negatives, the concept is expanding

The necessity for battery redundancy is probably the scheme's biggest disadvantage, which also applies to scooter networks. There must be far more of them in circulation than vehicles. This has a huge impact on the environment, both in terms of production and recycling.

Another disadvantage is that twice as many batteries cannot supply the system twice as long. Even unused ones deteriorate with time. On the other hand, the fact that they charge more slowly in exchange stations than when using a fast charger argues in their favor.

Despite a number of drawbacks, several key actors appear to have relied on obsolete technology until recently. The substantial installation of exchange station infrastructure in Europe appears to be a question of time as well. We'll watch if their networks create their brands on their own or if they collaborate and employ modular content.