Smart features complement call notifications, notifications and messages, except that in this case you do not receive detailed information... 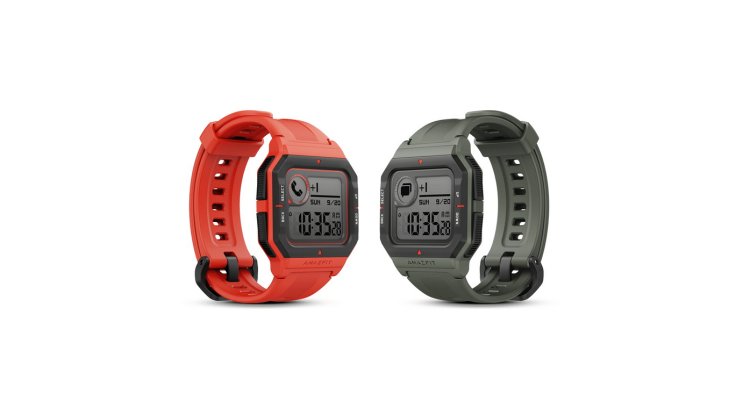 Amazfit Neo is a watch that irresistibly resembles some Casio digitals from the eighties of the last century, with a bit of a touch of the popular G-Shock series and of course the inevitable smart features that are the reason to buy a watch like this at the moment. With its square screen and octagonal body, the Neo really looks specific, especially in the orange version that was found in our test, in addition to which black and gray are also available. The specific color seems even slightly fluorescent because it looks different outside in the sun and with dim light, so we believe that those who like something different will like it.

The case of the watch is made of plastic, but we say, very reminiscent of the G-Shock, which is known for its durability, after all, the Neo is waterproof to the 5ATM standard. The watch has compact dimensions and profiles, so it fits very nicely on the hand, and the bracelet, although made of a slightly harder material, is very comfortable, maybe more comfortable than standard silicone ones, so wearing it is very pleasant, especially since the watch weighs only 32g.

Unlike most current smartwatches with AMOLED screens, this model uses a classic retro LCD with seven-segment elements that offer outstanding visibility even in the brightest daylight, with screen lighting that is activated as needed. The interface is very interestingly designed and you will get used to it very quickly, and we believe that there are users who may prefer it, especially among those who like simplicity, without too many options. At the bottom of the screen is a display of the current time, and in the upper left corner, icons appear that indicate the function to which the data refers in the part of the screen next to it.

This you have a display of the weather forecast, the temperature range of the day, a stopwatch, a display of the current time in the largest cities around the world, the next alarm, battery level, current pulse, as well as the number of steps, distance and calories burned that day. For many, especially more advanced users, this will actually be enough information for exercise, because based on the pulse, they already know which zone they are in, the stopwatch is at their fingertips, and the screen visibility is the best possible. Smart features complement call notifications, notifications and messages, except that in this case you do not receive detailed information, but only an audible notification and the number of incoming calls, messages or notifications from applications, while for content and details you need to look at the phone.

Although this smartwatch has seemingly relatively modest functions, it monitors a lot of parameters whose details you can find in the Zepp application, such as e.g. a detailed overview of heart rate movements, calories burned, as well as information about sleep such as time spent at a particular stage of sleep. It is also interesting that the pulse information can be shared with other devices via Bluetooth, so Neo can be used practically as a pulse sensor. Just like on GTR2 and other Amazfit models, Neo will also inform you about your PAI score, so it is a good solution for those who want to leave the clock to keep track of progress.

Because of the simplicity of the LCD screen, battery life is one of the strongest aspects of this model, so with one charge, you can expect up to 28 days of use, which is really impressive.