The HAF 700 EVO is the new top model from the Cooler Masters case series with a focus on high airflow, which also has a proud price. 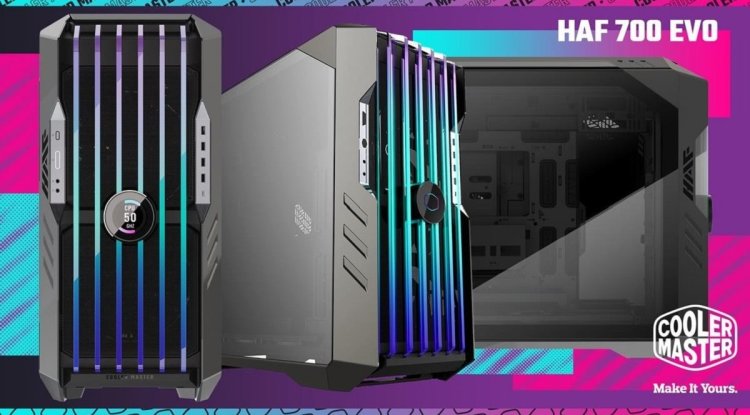 The HAF 700 EVO is the new top model from the Cooler Masters case series with a focus on high airflow, which also has a proud price.

Cooler Master's HAF series is expanding to include new Bigtower flagship, which is supposed to come up with a tool-free design and a contemporary and futuristic look at the same time. In addition, according to the announcement, the revised design should feature "next-gen hardware compatibility" and high airflow.

Thanks to up to eighteen 120 mm fans or radiators up to 480 millimeters in size, the manufacturer promises "excellent cooling properties". Meanwhile, the interior offers plenty of space for installing mainboards up to the SSI-EEB form factor and “the largest graphics cards currently available on the market”, while there should still be enough space for a large number of storage and other components.

Compared to the first generation HAF cases, the HAF 700 EVO should particularly focus on an "enhanced user experience", according to Cooler Master, while the "intake blades" made of tempered glass should demonstrate the aesthetics of the generation and ensure that together with the mesh elements are given efficient cooling. The "2nd generation" ARGB LEDs enable individual control.

In addition, the HAF 700 EVO is equipped with a built-in LCD display called "Iris", which is said to allow real-time system monitoring and optimization, while also being able to display your own photos and videos. Meanwhile, in terms of tool-less design, the case aims to stand out from the crowd with several patent-pending features that allow bare-handed installation of multi-function mounts, the power supply, and the graphics card. The HAF 700 EVO should be available from the middle or end of March at a recommended retail price of 550 dollars.