Increasingly popular Gateron Red microswitches - linear, with a low activation point set at 2 mm and a pressure force of 45 grams. 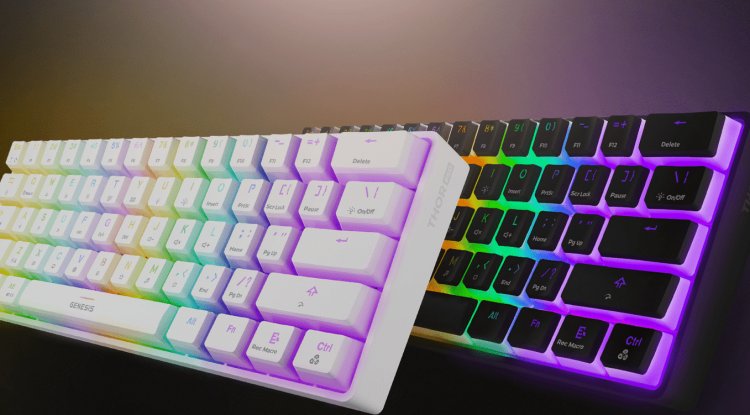 Do you know this feeling when something that seemed too familiar to you suddenly turns out to be a total surprise? The new Genesis Thor 660 wireless keyboard can make such an amazing impression. The inconspicuous, compact appearance hides quite a good piece of equipment here.

So it looks like it doesn’t need such a huge desktop keyboard anymore. Now it is more important than it gives me some universality. Importantly, however, it must be mechanical. You know - whoever has “tasted” a mechanic will always reach for a mechanic.

The keyboard for the visual purist

Don’t get me wrong, it’s not about her capabilities, although these are pretty good too (more on that in a moment), but about her looks and the first incredibly positive impression when you take it out of the box. Genesis Thor 660 is a small, compact design, typical for 60% of keyboards (occupying 6/10 of the surface of a normal, full-size keyboard), which in fact looks much more impressive than on the box.

A very solid base, quite the right weight (for such small dimensions) and a high profile - this is the first thing that catches our eyes here. Especially in the case of the white color version of this keyboard. Because you must know that Genesis Thor 660 is also available in the black edition and there is a detail that not everyone may like. The PBT keycaps are double-layered here - non-translucent top and milk-white bottom, which is supposed to intensify the illumination effect. And since the whole thing is a bit like a pudding, hence the name “Pudding Keycaps”.

This is where the color version of the keyboard comes into play. In the case of the black, the combination of the dark top with the milky white bottom does not look particularly good for me. It is different when the entire key is white. Oh yes, then something like this looks much better immediately.

And that’s probably why Genesis Thor 660 absolutely charmed me at the time of the first launch and flared up with PRIMO RGB backlight. I do not believe that I am writing this, because so far I have not liked the intense, multi-colored light beating between the keys (I prefer a one-color classic), but here, with the white keyboard, it looks really good.

Appearance, appearance, but also what the keyboard can do. So let’s start with the fact that Genesis Thor 660 is a full-fledged mechanic. So here we have the increasingly popular Gateron Red microswitches - linear, with a low activation point set at 2 mm and a pressure force of 45 grams. Among players, they are considered quieter than Cherry MX Red and much smoother.

Interestingly, Genesis also boasts of high-quality, factory-lubricated stabilizers. For most, it would probably not be of great importance, but in fact, it is impossible not to notice that none of the longer buttons (and especially the space bar) here huddle sideways. The keys are springy and free of any extra wobble noises. A big plus for the manufacturer.

Undoubtedly, the most important feature of this small keyboard is the double test of reliability - wired and wireless, via Bluetooth and the ability to work with as many as three devices simultaneously. Older ones will be one of the three key combinations FN + BT1, BT2 will be BT3 and the south can be paired. Then we can quickly connect the same combination between them.

Of course, we also have a dedicated program - for each version of the colorful Genesis Thor 660 with personal. It works equally well in the translation process, which may be a certain flaw. It should also be borne in mind that the keyboard has a built-in memory, which contains all the available settings, and in addition, the number of available functions is also available from the stand of the keyboard itself, across the board. In this way, you can change the lighting settings, reward the macro or use the multimedia key.

Compact paints, or use impressions

In addition to the access to the south of the plate, I have the comfort of being able to use BT on a desktop computer. Thanks to this, I quickly paired the Genesis Thor 660 with a desktop and notebook, which I use to exchange for a day, and then I just moved the keyboard from place to place. The connection between them was brilliant, and I could comfortably write once and play once.

Eyewitness does not mean that the jump from the long, full-fledged keyboard on little Genesis was painless. It took me a little while to get used to some of the clearer keyboards and other characteristics of the work of microswitches. Not to mention that we have to learn to use the keyboard shortcuts, which here, because of the lack of functional pressures, are absolutely finite.

I appreciate the elasticity of the connectors, the speed and fluidity of their actions, as well as the specific arrangement of the clamps and their profiling. The Genesis Thor 660 does not have bowls of unfolded legs, which could change the angle of the key (below it you will find only anti-slip bars and a wireless test connector). We need to get a better idea. Fortunately, it was not true. Similarly, there is a battery that, despite enduring more than a week of intensive tests, has so far not been able to charge.

Soon Genesis Thor 660 to the keyboard created for the game I could not give it to the most demanding sample during multi-hour games. Rainbow 6 Extraction, Age of Empires IV and Halo Infinite also served as a test site. And everywhere I played, I really didn’t want to. For the sake of certainty, we have equally promised the full anti-hosting function and NKey-Rollover, which was promised by the producer. And here, too, I escaped without any unpleasant incidents.