Logitech POP Keys are offered in the 3 designs Daydream, Blast and Heartbreaker, in which three colors are always combined. 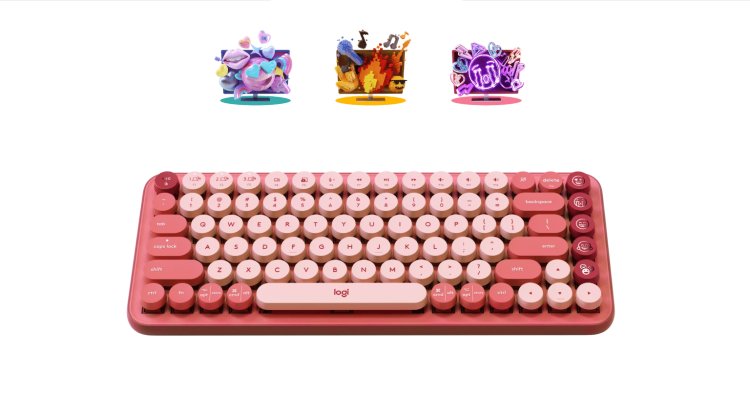 Getting started and setup

Since the Logitech POP Keys are supplied with the 2 AAA batteries required for operation, you can use the mechanical keyboard directly after just one action. All you have to do is pull the protective strip out of the battery compartment on the back and the keyboard with emoji keys will turn on automatically (the main switch must also be pressed!). Regardless of whether the Logitech POP Keys sends its data to the PC or Apple Mac via Bluetooth LE or the included Logitech Bold USB receiver, you should install the Logitech Options software before just pairing. You will not only need them later to configure the emoji and F keys, they will also assist you in establishing a connection to the desired device.

The Logitech POP Keys are offered in the 3 designs Daydream, Blast and Heartbreaker, in which three colors are always combined. Daydream design mixes mint with lilac and white. The round keycaps and body of the Blast model feature an arcade-inspired black, gray, and yellow colorway, and the Heartbreak variant features a raspberry and neon coral-toned set.

No matter which design you choose, you can add a very personal touch to your desk. However, the coloring remains the only difference between the models. The equipment, which not only includes the 8 interchangeable and customizable Emoji keys, is the same for all 3 versions of the Logitech POP Keys.

The first equipment highlight of the Logitech POP Keys is the fact that the mechanical designer keyboard has two wireless modes. On the one hand, the Logitech POP Keys contacts devices with a USB port (PC/Mac/Notebook/MacBook/Chromebook) via the included Logi-Bolt USB receiver. The latter is very small, which is why it is called a nano receiver, and it receives its data in the 2.4 GHz wireless band. The wireless data transmission is stable, has hardly any packet loss and the measured range is around 12 meters. Since not every PC/Mac has a Bluetooth module on the motherboard, data transmission via 2.4 GHz is the simplest and best solution for stationary computers and notebooks.

Personal emotion on a button

The main feature and certainly also the unique selling point of the Logitech POP Keys are the 8 interchangeable emoji keys. Strictly speaking, the emoji buttons are 5 additional special keys on the right edge of the main keypad. A total of 9 keycaps with emoji symbols are available for the latter, which you can exchange as you wish.

Tactile mechanical keys for the typing feel of a typewriter

The free-standing key switches with their round or rounded keycaps (backspace, spacebar, tab, shift and shift-caps lock) give the Logitech POP Keys a clearly vintage look and one is immediately reminded of an old typewriter. In order to offer users not only the retro look, but also the typing feel of a mechanical writing instrument, Logitech does not equip the POP Keys with rubber dome buttons, but with mechanical key switches.

No new assignments without optional software

As we have already seen with the remapping of the emoji keys, the Logitech POP Keys can only realize their full potential with the extra keys and their mapping with new functions or emojis if the software is installed. You don’t need Logitech Options software for standard media, voice recording, mute, screen panning, and desktop switching. However, as soon as you want to assign a different function to one or more of these keys, such as “Home”, “Launch Application” or “Keypress Assignment”, Logitech Options comes into play.