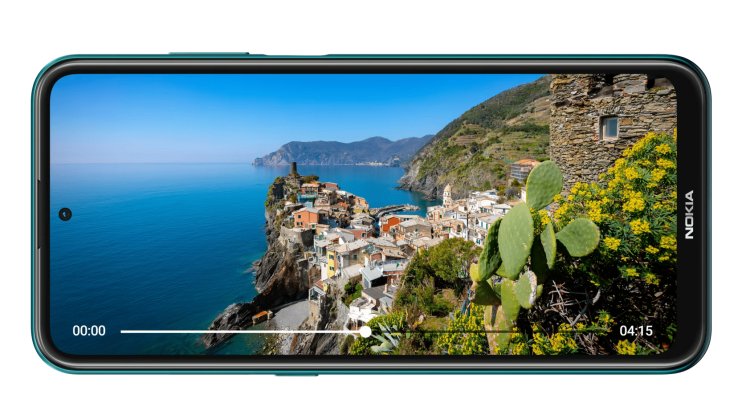 Design and quality of workmanship

6.67” Full HD+ display. Turn the phone to the other side, and you will be greeted by a screen below which is a slightly larger bezel with the Nokia logo, while at the top of the screen this time in the middle is a selfie camera in the punch hole style. Above the screen is, of course, a speaker for conversations.

At the bottom - a USB-C charging slot, a microphone for conversations and a speaker, and a 3.5 mm headphone jack. At the top, we find a secondary microphone. The right side does not bring anything unusual - a power button in which the fingerprint sensor is integrated, and buttons for adjusting the volume. The left side contains the SIM card slot, there is another button. It is a button that activates Google Now and although this feature can be turned off.

Under the hood is a Snapdragon 480 5G made in 8nm process, which is actually somewhat expected for this price range. That means an octa-core processor with eight Kyro 460 cores with two speeds of 2.0 GHz and six speeds of 1.8 GHz. Of course, there is also the Adreno 619 graphics processor. The phone comes in a version with 6 or 8 GB of RAM, and the Nokia X20 that came to us for review is a model with 6 GB of RAM.

The Nokia X10 has enough RAM and a strong enough chip to handle all the tasks assigned to it, like great multitasking. Gaming is not the best side of this smartphone, but it is possible to run some more demanding games with solid graphics and performance, which is commendable.

Nokia has “packed” five cameras into the X10 - four on the back and one on the front of the device. On the front there is an 8 MP selfie camera, while on the back of the island there is a 48 MP camera with phase detection autofocus (PDAF), a 5 MP ultra-wide camera and a 2 MP depth sensor and macro camera. Next to the island is an LED flash. The rear camera has the ability to record videos in fullHD (1080p) resolution with 30 or 60 frames per second, while the front camera provides the ability to record in the same resolution but with 30 frames per second.

With a 6.67-inch screen and a 4470 mAh battery with the ability to quickly charge 18W. Although it’s not a phenomenal charging speed, the phone charges from 0 to 100% of battery capacity in about 2 hours, and those two hours of charging give you up to two days of moderate use. Of course, with a bit more intensive use, it’s less (about 8 hours of constantly turning on the screen), but it’s nice to see more mobile phones with a battery that lasts a day of use if that much.