The electric car manufacturer Tesla will defuse the production model of the Cybertruck compared to the 2019 study in order to get the pick-up approved. 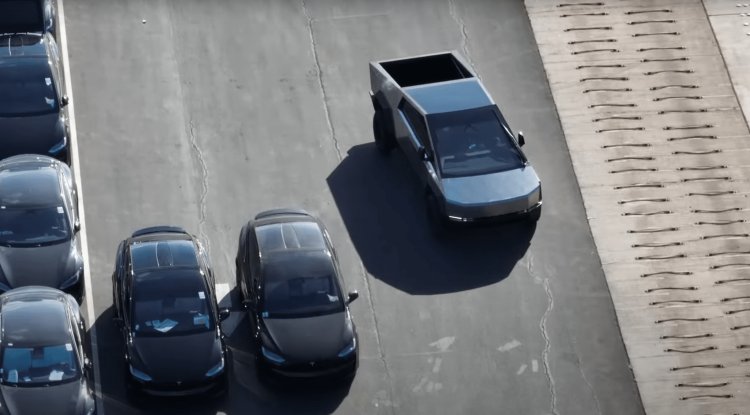 The electric car manufacturer Tesla will defuse the production model of the Cybertruck compared to the 2019 study in order to get the pick-up approved. Now prototypes have been spotted.

When Tesla unveiled the fully electric Cybertruck pick-up in 2019, there were more than 250,000 reservations. The pick-up truck is supposed to appear towards the end of 2022, after the date originally planned for 2021 could not be kept. On the Internet, numerous users have taken the Cybertruck as a model for memes. The conspicuously angular shape of the Tesla Cybertruck was inspired, among other things, by the James Bond car Lotus Esprit. After all, the Lotus Esprit is also angular. The Halo series of games also served as further inspiration for the electric pick-up, according to Tesla boss Elon Musk.

It is currently unclear whether the Tesla Cybertruck can even be driven on public roads without a special permit. In its presented form, this pick-up is simply not eligible. It seems questionable whether the angular design will get through the crash test. Now, around the Tesla factory in Fremont, prototypes are driving, some of which have a significantly softened appearance.

Crash regulations are likely to cause design changes

Although it remains an angular, eye-catching look, the front end is now a bit more rounded. The legal requirements for crash tests should be complied with since the angular front of the study would have meant too high a risk of injury to other road users such as pedestrians. In addition, the horizontal light bar has probably given way to simpler light construction. In a number of countries, such as the USA, cameras are not allowed to be used as exterior mirrors, so that the production model drives up with conventional exterior mirrors. Instead of laser windshield wipers, the production version of the Cybertruck will probably be equipped with conventional windshield wipers.

Compared to the presentation in 2019, there are now a few other automakers with electric pick-ups. This includes the GMC Hummer EV from General Motors. The new edition of the lobster comes with a crab walk so the car can move sideways at a walking pace. However, Tesla does not want to leave this feature to the competition and will also equip the Cybertruck with a crab walk and install separate rear-axle steering for this.

The following Cybertruck models should be available

Tesla is planning three different engines for the Cybertruck. The e-car manufacturer specifies a maximum range of 800 kilometers, but this theoretical value will probably not be achieved with all variants. The following versions are planned:

So far, it is only clear that the top model for 70,000 US dollars will be on the market at the end of 2022. When the other versions will appear is unclear. Pick-ups are particularly popular in North and South America. In the USA you get a Ford F 150 pick-up - the equivalent of the price of a VW Golf in Germany. Many Americans love vehicles with an open cargo area, while this vehicle class is an exception in Europe.