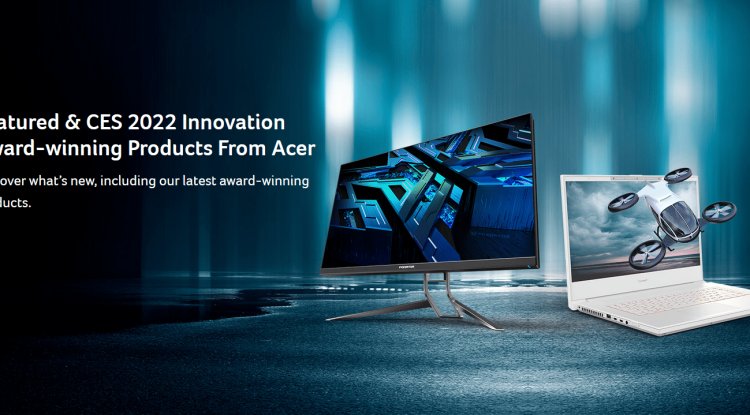 Three new Chromebooks, refreshed Aspire C27 and C24 desktops, a powerful and lightweight Swift X, a refreshed Predator and Nitro line of gaming laptops, an environmentally friendly Aspire Vero National Geographic Edition, a new Predator Orion gaming PC and innovative Predator gaming monitors. These are all Acer’s novelties that we had the opportunity to see at this year’s CES, and we decided to highlight some of them.

Besides the new Chromebook 315 and 314 models, Acer also introduced the interesting Chromebook Spin 513 with a 13.5-inch VertiView screen with a resolution of 2256 x 1504 3: 2 aspect ratio. It is, therefore, a device of convertible design, which the company states is ideal for those who travel a lot, which is certainly helped by the battery, which should last up to 10 hours of use.

It is powered by an octa-core MediaTek Kompanio 1380 processor paired with 8 GB of RAM and 128 GB of internal memory, which, according to Acer, will be quite enough for business and school multitasking. Durability is because of the MIL - STD 810H standard and the notebook also boasts Wi-Fi 6 support, backlit keyboard, USB-C port and support for DTS Audio.

The Chromebook Spin 513 will arrive on the domestic market in April.

The 14-inch model in its slim 1.4-pound body hides the 12th generation Intel Core processor and Nvidia GeForce RTX 3050 Ti graphics card, while the 16-inch version comes with the same processor but with an Intel Arc GPU. It comes with up to 16 GB of RAM and 2 TB of PCIe SSD memory.

It should be noted that both models come with Windows 11, two Type-C Thunderbolt 4, two USB-A and one HDMI port and a fingerprint reader. The company points out that they have solved the cooling extremely well, so the devices should not overheat when using the most demanding programs.

Predator X32 and X32 FP gaming monitors will definitely catch the eye of Acer’s novelties. Both boast a 32-inch UHD IPS display of 160 Hz (165 Hz if overclocked) that covers 99 percent of the AdobeRGB color gamut.

Predator X32 has support for Nvidia G-Sync Ultimate, three HDMI 2.0 and one DisplayPort port, while X32 FP with DisplayPort, one Type-C, USB Hub 3.0 has four HDMI 2.1 ports, which will help in merging, for example, multiple game consoles.

Both monitors have a response time of 1 ms, so Acer points out that the X32 FP is the fastest gaming 4K monitor on the market. It overclocks to 165 Hz. It should be noted that the company received the CES Innovation award thanks to the X32 monitor.

Acer has also refreshed the Predator Triton 500 SE, which will hit the market this February with the 12th generation Intel Core i9 processor, Nvidia GeForce RTX 3080 Ti GPU and up to 32 GB RAM and 2 TB PCIe SSD memory. The company says it is a “special edition” notebook for gaming and business, especially because of the metallic aesthetics that supposedly fit into any environment.

The Triton 500 SE uses a triple fan system for cooling, including two 5th generation AeroBlade 3D fans with 89 metal blades each. In addition, to improve cooling, there is also Acer’s Vortex Flow technology, which redirects airflow where it is most needed, as well as four heat pipes.

Gamers will, according to Acer, appreciate Triton’s 16-inch PolarBlace WQXGA 240 Hz display and 3 ms response, which also has support for Nvidia G-Sync. For content creators, there are up to 500 threads of brightness, one hundred percent DCI-P3 color space coverage, and a 16:10 image format.

The laptop comes with Windows 11 and has a full range of USB 3.2 Gen2 ports, including two Type-C Thunderbolts with support for DisplayPort and power. For those who want 4K resolution in 120 Hz, there is an HDMI 2.1 port that allows it, and other features include Intel Killer E3100G 2.5G Ethernet controller, Intel Killer Wi-Fi 6E 1675i and Control Center 2.0.