Magawa: A Rodent That Saved Many Lives

A giant African rat named Magawa even received an order of bravery! 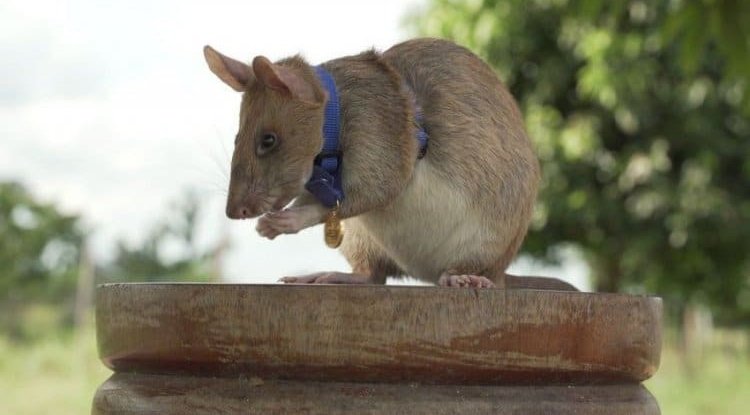 Seven-year-old Magawa rat has finally retired after five years of searching for landmines and other unexploded ordnance (UXO) in Cambodia.

He was also the most successful trained rodent when the Belgian charity Apopo trained him to find landmines and warn people that explosives were nearby.

This mouse "cleaned" more than 225,000 square meters of land, which comes to about 42 football fields. He found more than 70 landmines and 38 other deadly items. Last year, Magawa won the PDSA gold medal for bravery, which until then had been won only by dogs. It is estimated that there are up to six million landmines in Southeast Asia.

Magawa is a species of giant African rat (Cricetomys gambianus) whose lifespan is eight years.

"Although he is in good health, he has reached the age when he is retiring and it is obvious that he is slowing down. It is time for retirement" - they pointed out from that organization. Since 1990, the group HeroRAT has been formed, which trains animals to remove landmines. After a year of training, all animals become certified, reports the BBC.

These rodents are trained to detect chemical compounds inside explosives, which means that they will ignore metal and look for landmines faster. Once they find the explosives, they scratch the top of the mine to warn people. Magawa is capable of examining an area the size of a tennis court in 20 minutes, Apopo adds that it would take one person between one and four days with a metal detector for something like that.

The organization has already prepared about 20 new rats, but they note that the new recruits will have a difficult task to reach the level of the legendary Magawa.