The repair experts at iFixit have released a video in which they tear down the upcoming Steam deck and assess the status of the repair. 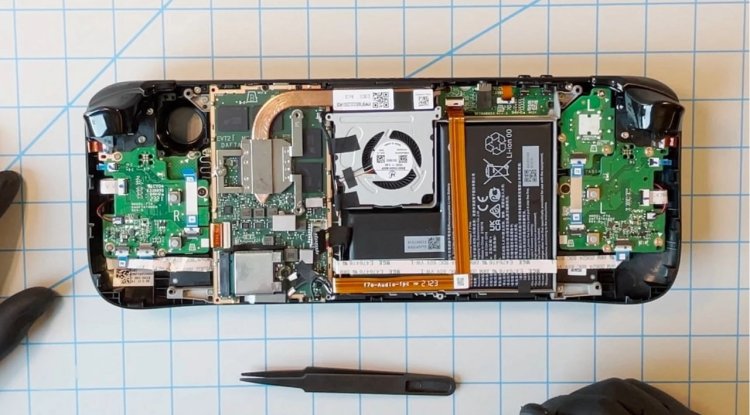 The repair experts at iFixit have released a video in which they tear down the upcoming Steam deck and assess the status of the repair. Valve announced that iFixit will be the authorized partner for the sale of replacement parts for the Steam Deck.

The release of the Steam Deck is not long in coming. Until then, Valve will provide the public with more information, such as that the company has chosen iFixit, an authorized partner for the sale of spare parts. iFixit has become known for its teardowns of various hardware on YouTube and, in line with this announcement, has taken on a Steam Deck in order to disassemble it into its individual parts. In October of last year, Valve itself carried out a teardown of its handheld and specifically pointed out the risk of injury when handling the individual components.

iFixit takes a close look at the Steam Deck

The Youtuber notes right from the start that the Steam Deck is extremely easy to open, as you only have to remove eight Phillips screws and a few plastic clips to access the Steam Deck's inner workings. Not much has changed in the Steam Deck since Valve's teardown in October, aside from a different screw placement, black circuit boards, and the fact that all components are clearly labeled. In the next step, iFixit dedicates itself to the thumbsticks, which are very easy to remove with three screws. If gaming joysticks drift, iFixit recommends replacing the thumbsticks, which is easily possible with the Steam Deck.

The M.2 2230 SSD, which can be removed with a screw, also gets a lot of praise, because replaceable storage is said to have become a rarity. Next, iFixit works its way from the outer trigger buttons, which have proven stubborn at removal, and the button input boards, through the inner touchpad hardware, and the cooler and fan to the core, the Steam Deck's mainboard. The AMD APU and various LPDDR5 chips from Micron can be found on it.

iFixit explains that the mainboard does not necessarily have to be replaced at a high cost due to the many other breakout boards, as there are alternative repair options. What proved to be tough on the teardown was liberating the L-shaped battery. This should be brought to a level below 25 percent prior to removal and then pryed out from the bottom edge after applying plenty of heat to soften the adhesive.

Finally comes the display, which can also be removed with heat for the glue and a suction cup. Finally, iFixit sets a seven out of ten points on its repair scale. The above-average modularity of most of the components of the Steam Deck and the simple opening process were convincing. The storage solution and the fact that a Phillips screwdriver is sufficient for repairs also brought in plus points. However, the Achilles heel of the Steam Deck remains the battery.